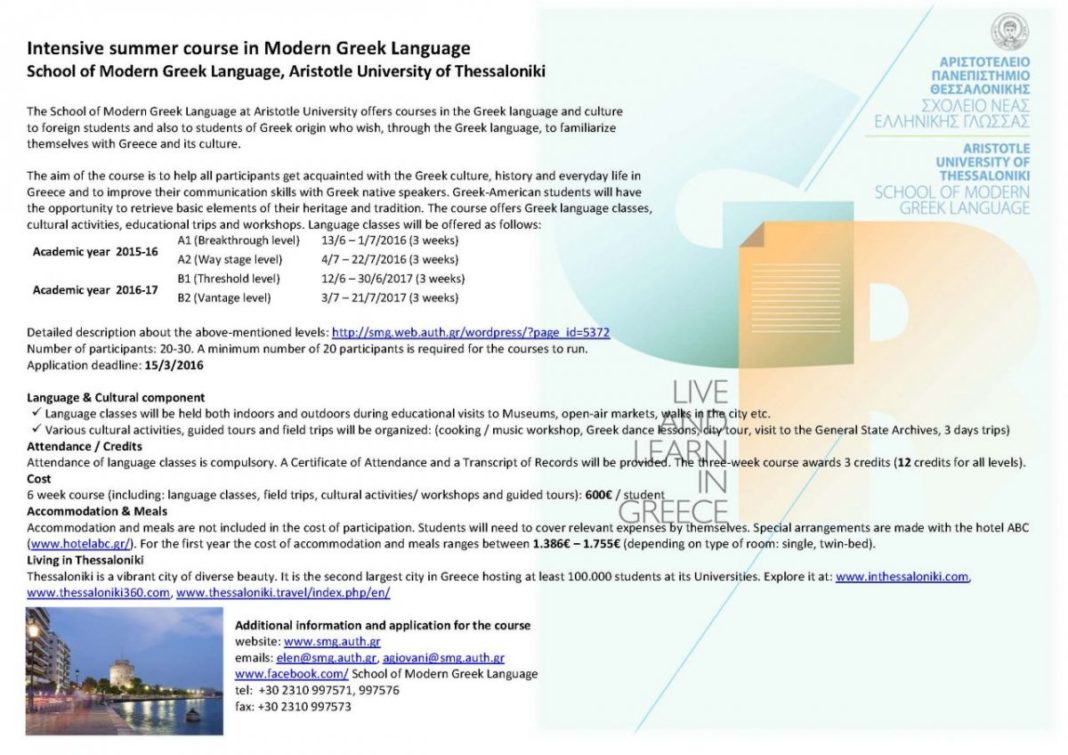 The Hellenic Link, Inc. initiative of several years for teaching of the Modern Greek language in American high schools is a noble, though herculean task to achieve. Even as the effort is gaining ground, the end result is still in the distance.

The need for teachers of Modern Greek language, and Hellenic studies, is of major importance, but dependence upon Greece to provide them is not something that can or should be relied upon exclusively, though not for any negative reasons.

Preparation of teachers for Modern Greek language and Hellenic studies is viable through the established system of the Richard Stockton College of New Jersey Greek Studies Program. Perhaps the major defect is that with approval of Modern Greek to be taught in American high schools, the possibility might be that only very few secondary schools might accept it, primarily of course due to financial reasons.

At the present time, Greek language learning in our communities is almost exclusively at the afternoon schools of the local Greek Orthodox churches. However, these offerings serve few pupils, the limited number due to several reasons, including distance. The Greek American households are no longer based in Greek American communities near the churches.

The major centers for Greek language teaching, and learning, are now the “charter schools” which, unfortunately, are very few. This leaves the bulk of Greek studies opportunities to some 85 colleges and universities that have some Greek offerings from just basic language to several courses. However, not every Greek American attends these limited higher education institutions out of about 3,500.

We are now proceeding beyond the third generation of Americans of Hellenic descent, and the connection of heritage begins to fade. A recent survey revealed

that 60% of Greek American college graduates do not return to the Greek American communities. It is obvious, therefore, that while we are preparing for Greek language programs to be instituted in our American high schools — albeit with several apparent difficulties on the path notwithstanding, we must look elsewhere also for yet an additional path before the third and fourth generations distance themselves beyond salvation.

Under current higher education requirements, college students must complete two years of a foreign-language course. For many, if not for most high school graduates – including Greek Americans, this is not usually a favorite subject. Disinterest in struggling to complete the course while concentrating on their major field of study is considered a heavy burden, which they undertake reluctantly, and in far too many cases with limited results other than fulfilling the dreaded requirement.

There may be a better way of fulfilling the college foreign-language requirement, and with positive attitude and vigor.

The Hellenic Link has ‘links’ with higher education institutions in Greece. With appropriate contacts, a summer program of Greek as a foreign language may be instituted for “Elementary Modern Greek” and for “Intermediate Modern Greek” courses to be offered, each for six college credits. This can be accomplished with daily 4-hour classes in two three-week sessions, receiving 6 college credits. Attendance in two summer sessions will complete the U.S. college requirement.

However, let us examine the EXTRA advantages students will obtain. They will learn Greek from a native source; they will not be forced into a difficult situation of ‘competing’ with their other college courses; they will be gaining a study-abroad experience; they will be learning about Greece; they will be immersed into the Greek society and culture, and witness the esoteric practice of their Orthodox religion in local church attendance; they will enjoy summer in beautiful Greece; they will make new friends, both among their Greek American fellow students

and fellow Greek compatriots with whom they will associate and befriend; they will ‘sense’ their Greek heritage and identity; and so very many more that one may imagine.

And, ultimately, they will be able to transfer their accumulated credits to the U.S. tertiary institution of their attendance, immediately satisfying the foreign- language requirement. An additional positive element is the fact that their academic grade point average will not be affected, since credits transferred from another tertiary institution are accepted directly, whereas grades are not incorporated into academic records.

Selection of a Greek university to establish a Greek language summer program must be considered carefully in a manner that will provide to the students the greatest possible exposure to the entire country. Despite its outstanding record of long-standing in Greek as a foreign language, the Aristotelian University of Thessaloniki is not far from a centralized location for easy access to the students, and it offers all the Hellenic opportunities of Greece North of Athens, and of islands.

Certainly Athens is the most centralized location, but due to the hugeness of the city, its several problems of concern to many — especially parents, should not be a priority, although most certainly students will visit the famous capital perhaps several times over their six-weeks stay each summer.

The University of Patra is the second institution that has established a similar program. The campus itself is not inside the city of Patra, but some 9 kilometers – 10 minutes — away, in the small college-town of Rio, near the new bridge connecting Peloponnese with Central Greece. The campus is very nice, the buildings very good, the town friendly, and a long and beautiful beach nearby. Its location makes it ideal for easy access to Southern Greece — including Crete, to Athens, Northern Greece, the Ionian Islands, and even the Aegean.

Patra itself is a large city – the nation’s third, and easily accessible. There is a small but modern electric train that commutes between Rio and Patra every half hour for 1 Euro each way, although students ride free with their student identity card.

Of course, it is possible to establish a summer Greek language program at a U.S. college or university, and certainly the Richard Stockton College of New Jersey would be a sound one. However, the experience of being immersed in Greece for two summers – one at a time, cannot compare with being in the U.S. Also – and with due respect to the Richard Stockton College, or any other U.S. institution — study through their program, even if traveling to Greece, will be much costlier than attending a Greek university. In addition, U.S. colleges and universities sending students abroad prepare most everything for them, even planning their travels, taking away their initiative for individual responsibility and creativity.

Direct contact with the two universities through colleagues associated with the Hellenic Link should provide details. But whatever the situation and whatever plans are to be made, the first “Elementary Modern Greek” course is scheduled be offered this coming summer of 2016. However, in order for the programs to commence, they must have the minimum of 20 registered students.

In conclusion, if either university does not have the required number of registered students, it will cancel the program, not to be renewed, because the cost will have been already heavy. Also, wait for yet another possible future effort will mean that yet another crop of young Greek Americans will lose out.

WE CAN NO LONGER AFFORD LOSSES!

Editor’s Note:  It has been almost 40 years that I graduated from the University of Thessaloniki and still they are talking about “Nomos Plaisio for Paideia”.

The number one product for export in the State of PA is Education.