The Greek and the Portuguese Prime Minister sign joint declaration

PM Mitsotakis meets with visiting US House of Representatives delegation

PM Mitsotakis: Despite the adversities, the country is moving forward 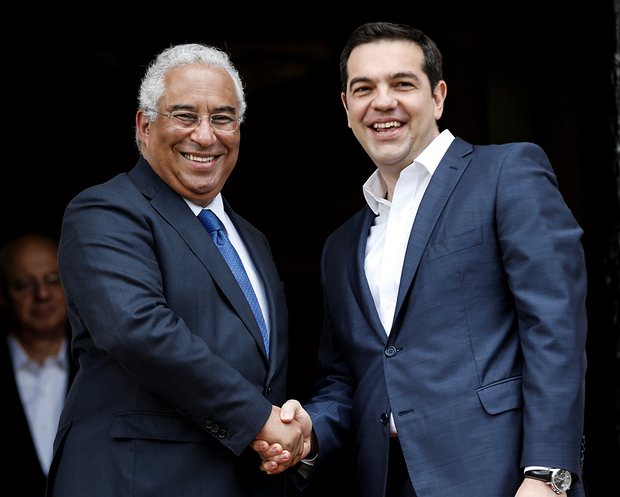 Following to his official visit to Athens today, the Prime Minister of Portugal Antonio Costa and the Prime Minister of Greece Alexis Tsipras confirmed that Greece and Portugal are determined to strengthen their cooperation, not only within the framework of the EU, but also in other multilateral fora, in order to better address international challenges.

They highlight that the unprecedented migrant and refugee influx to Europe constitute an international challenge, which requires a comprehensive approach focusing on the root causes of the problem, namely war, violence and poverty.

They believe that unilateral actions and failing to follow the commonly agreed European action plan undermines European solidarity and a humane reaction to the crisis.

They share the belief that policies based solely on austerity are wrong and ineffective in dealing with current challenges.

Austerity policies maintain recession and social divisions and have already shrunk the social protection system, which allows for balanced and just growth. Fiscal balance should go along with social balance.

Additionally more needs to be done regarding the protection of financial stability, whilst a European mechanism of deposits’ guarantee needs to be established.

Europe needs to change course. Their two countries decide to work closely on all levels to promote a progressive agenda for democratic governance in the Eurozone, economic growth, employment as well as social, just and environmentally sustainable growth in Europe.

The unprecedented migrant and refugee influx faced by Europe last year, as well as the terrorist attacks including those in European capitals, highlight the necessity for a more active and comprehensive Common Foreign and Security Policy.

Greece and Portugal strongly support the unity and territorial integrity of Syria, the eradication of terrorist networks in the country and all efforts aiming at peace and stability.

They express their deep concern for the security situation in Libya.

Regarding the Peace Process in the Middle East, they reiterate their strong commitment to the solution of two states, which will guarantee a sustainable and sovereign state for Palestinian people living peacefully and securely next to Israel.

They reiterate their support to Iraq’s unity and territorial integrity and their support to the Iraqi government’s efforts to fight terrorism and ensure political cohesion and national reconciliation.

They express their concern for the deterioration of the security situation in Afghanistan. The international community has the responsibility of making every possible effort to support stability and security in the country.

They support the Minsk Agreements, which provide the only framework to a solution to the Ukraine crisis.

Greece and Portugal fully support the on-going negotiation process, under the auspices of the UN Good Offices Mission for a fair, sustainable and comprehensive solution of the Cyprus issue, based on International Law, the relevant Resolutions of the UN Security Council as well as the status of Cyprus as an EU Member State.

Greece and Portugal commit to enhancing their common efforts for the promotion of the EU’s external relations with the non-EU Mediterranean countries.