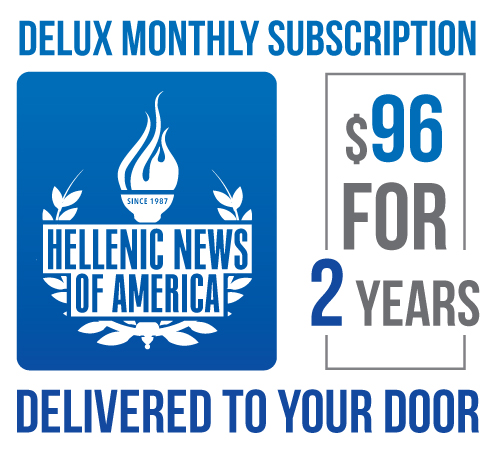 The Hellenic News of America is celebrating its 29th anniversary this year as a newspaper created by, for and about Greek Americans and the Hellenic community in Print-Web and Social Media.

The event will recognize the newspaper’s commitment to the Greek Diaspora in America and kicks off a larger celebration planned in 2017, when the Hellenic News of America celebrates 30 years of publishing.

There will be a reception and silent auction beginning at 4:30 p.m., followed by a 6 p.m. awards dinner. Entertainment will be provided by Stavros Theodorou and the Orchestra of Yorgos Rabos and Georgos Bazanis Klarino.

The awards dinner will honor six prominent Greek and Greek American individuals.  They are:

Attendees are expected to include up to 45 local physicians from Delaware County and the Greater Philadelphia area.

Letters of support congratulating the Hellenic News on its anniversary have been coming in from teachers, Greek leaders and from the Greek Orthodox Church community here in America.

He wrote that the staff of Hellenic News is helping to fight the negative effects of globalism. Those effects are eliminating borders, culture and language.

He also made mention of the newspaper’s social media and its “colorful, informative website.”

“The newspaper’s presence on the internet is delivering a message promoting language and religion brilliantly,” Triantafillou wrote.

He also applauded the newspaper’s work to help immigrants and Americans search for economic opportunities.

A letter was also received from Leadership 100, an endowment fund that advances Greek Orthodoxy and Hellenism in America.

“We join you in honoring distinguished Greek and Greek Americans in all fields of endeavor for their many contributions to their communities and their nations,” writes Leadership 100 Chairmen George S. Tsandikos, Vice Chairman Argyris Vassiliou, Secretary Kassandra L. Romas, Treasurer Thomas G. Jordan and Executive Director Paulette Poulos.

Petros Tatoulis, governor of the Region of Peloponnese in Greece, wished the editors of Hellenic News “every success at the celebrating event.”

Gov. Tatoulis wrote that he has been watching the newspaper for many years and that it was his wish that “it will continue to rise.”

What the newspaper has offered all these years “is really important,” he wrote, “not only for the cohesion of the Hellenic Community of America, but also for the information and communication with the fatherland, Hellas.”

Fr. Demetrios J. Constantelos, Ph.D.D.D, a retired priest of the Greek Orthodox Church and retired professor emeritus, wrote his congratulations to Hellenic News founder and publisher Paul Kotrotsios. He recalled early discussions with Kotrotsios in the 1980s about the need for a newspaper in the Greater Philadelphia area serving as a link between the different Greek American communities in the Metropolitan area and beyond.

“You began with dreams, determination, but inspired by ideals—and you succeeded,” Fr. Constantelos wrote.  “We should be grateful to you for your successful services to the Omoneia and its institutions.”

Helping to host the Oct. 30 celebration will be Lancaster resident Dr. Anthony Skiadas, founder and owner of Smilebuilderz, a dental campus established in 2006 that provides access to multiple dental specialists integrated at one location.  The 10-year-old business boasts up to 300 employees.

“I look at it like a challenge and an honor,” the 38-year-old says of being asked to speak at the Oct. 30 event.

Dr. Skiadas is a second generation Greek American with a wife and three children.  Back in high school he received a scholarship through the Philadelphia Hellenic University Club.  A year ago, he was asked to be a speaker at the club’s annual scholarship dinner, where 20 to 30 children were awarded scholarships of their own.

He supports the Hellenic values (Philotimo) given to him by his parents and grandparents—support for family and church, respect for your elders, generosity and the importance of a good education. Dr. Skiadas is a graduate of Swarthmore College.

“My dad’s a big driving force. He was born in Greece and went to college,” Dr. Skiadas says. “I’m just a by-product of his upbringing.”  He hopes to pass those same values on to his children and respects Kotrotsios’ efforts to keep the Greek identity going, particularly in a pluralistic culture like the United States.

For more information, or for ticket reservations to the Hellenic News 29th anniversary event, contact [email protected], or call 610-202-1972. Tickets may also be ordered on line by visiting hellenicnews.com/anniversary.

Previous articleDr. Anthony Skiadas, MC at the 29th Anniversary of the HNA
Next articleOn the Road in Greece: Visiting Tinos Island