On the Road in Greece: Visiting Tinos Island 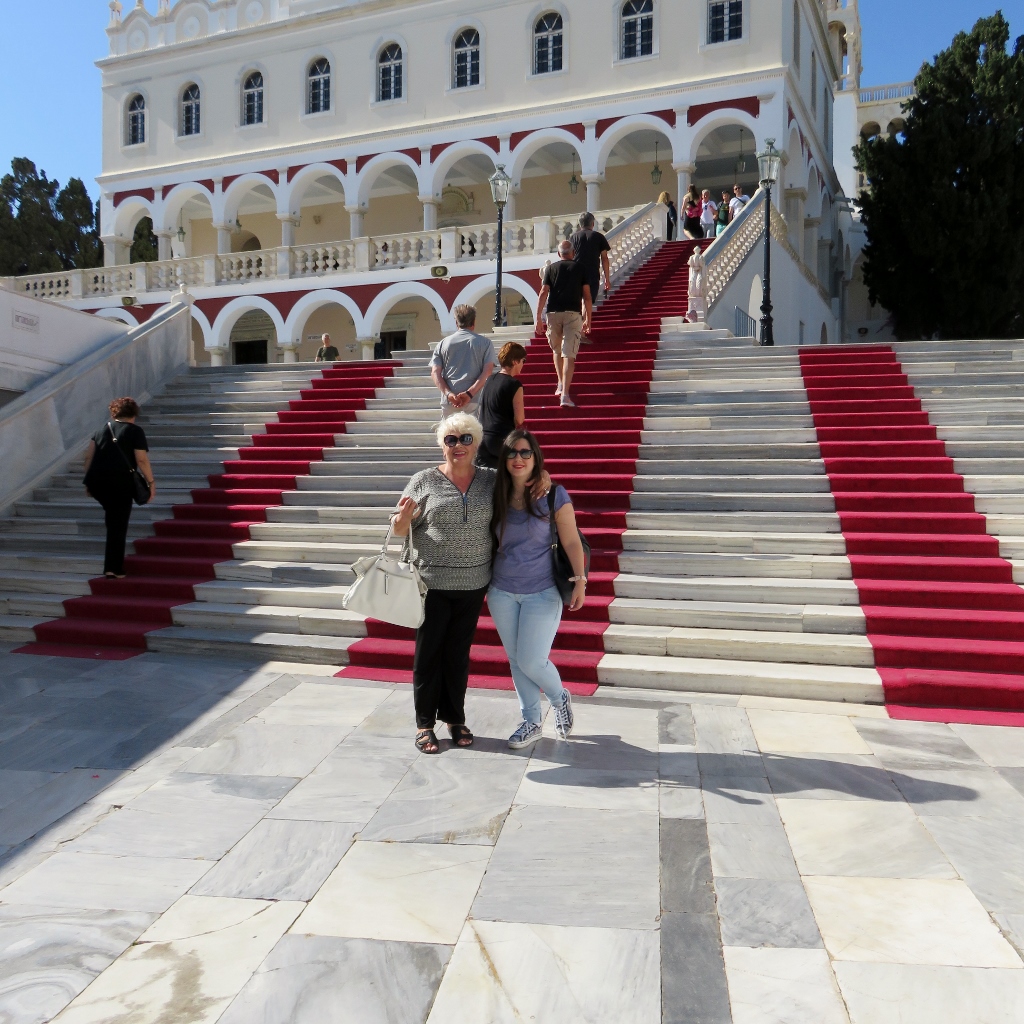 Kapogiannis Tours advertised on their website an excursion to the island of Tinos. It is known for its miraculous icon discovered during the Greek Revolution of 1821. “You will be going with a church group,” said Maria of Kapogiannis Tours. I met Anna Michalopoulou, President of the Parish Council of the Metamorphosis Church (Transfiguration of Christ) of Tripoli prior to the excursion in June at Kapogiannis Tours Office.

“The Good Friday procession of the Epitafio (Christ’s Tomb) proceeds around the Metamorphosis Church of Tripoli,” said our daughter, Despina, during an Easter trip to the capital of Arcadia, Greece. That was my introduction to this church. Their group made me feel welcome in a two-day trip to Tinos for 100 euros ($115) on June 4th and 5th, through Maria of Kapogiannis tours.  Akrivi Michalopoulos, 2016 valedictorian of her Philology class at the Patra University, knew fluent English. “I love the book “Tender Is the Night” by F. Scott Fitzgerald. My dream is to come to America one day.”

Greek tourists do not believe in orderly departure. It was a rush. Every man for himself. I found it very entertaining to see a different type of traveling. The harbor front is lined with cafes and hotels. The back streets are packed with restaurants and tavern. Kapogiannis Tours had a van waiting for us at the Tinos Pier to take us to Meltemi hotel. Anna, an administrator, gave us helpful shopping tips. Its location was in the center of the town. At the corner of our hotel we saw the Evaggelistria Church (Church of the Annunciation of the Virgin Mary). The rooms were excellent. We enjoyed a continental breakfast the next day.

Magdalini “Magda” Triantafillou, of a religious shop helped me buy souvenirs. She told me about her religious faith. I bought icons, crosses, and other religious items. Many of these small businessmen are suffering. Prices were very low. The Streets leading up to the church are lined with souvenir and religious shops.

A dream come true for me. Why? For one hundred years, every generation of my family would say this church is the #1 place to visit. It has the most miraculous icon in the Greek Orthodox world.

Tinos is known as a sacred Greek Orthodox Pilgrimage site of the Church of the Panagia Evangelistria in the main town of Hora. The church is home to the sacred icon of the Holy Virgin Megalohari (great blessings). Pilgrims come here to pray for healing.

Tinos Tours took us to our first visit at St. Pelagia’s monastery, also known as the convent of Kechrovouni. The site is on the highest mountain of Tinos. There is an amazing story based on modern facts concerning the nun St. Pelagia. She had a vision of the Virgin Mary telling her to find her home. She was told to look at a particular place. There were numerous searches. St. Pelagia had more visions and insisted they must keep searching. On January 30, 1823, St. Pelagia found the famous Panagia icon that is from the 7th century.

Driving up to St. Pelagia’s monastery gives the tourist a scenic view of mountains, plains and the sea. The monastery is made of white marble. The small church has a large oil painting of St. Pelagia with an altar of traditional byzantine icons. Her skull is enclosed in a case for veneration. The nuns offered us loukoumi (Turkish delight). We departed and went to our main destination, the Church of the Evangelistria.

“The Church gives hope and miracles to the sick, as well as hope to the Greek Nation during their fight for freedom in 1821. The discovery of the icon in 1823, during the reconstruction of the church, was viewed as an omen by the revolutionary forces. The Greek revolutionary leaders, such as Kanaris, Miaoulis, Karaiskakis, Makrigiannis, Kolokotronis, Nikitaras and others believed it was their obligation to come to Tinos the icon. The first schools of Free Greece were begun by the Evangelistria Church.” 1 I only heard and saw this at the Museum of the Patriotic War of 1812 in Moscow. Russia. “In an exhibit on the eve of the Battle of Borodino, the icon of Our Lady of Smolensk was carried around the Russian positions to encourage the soldiers and to boost their morale before the general engagement. On the day of the Battle of Borodino, processions of three icons, Hodegetria of Smolensk, Our Lady of Vladimir and the Iveron Theotokos were carried around Bely Gorod, Kitai-Gorod and the Kremlin walls. This exhibit and video of the icon procession brought alive my Greek-American education at St. Demetrios Church in Astoria and our daughter’s education at St. Nicholas Church in Flushing, New York.2

My late grandmother Despina from Tseme, Asia Minor, told me her maritime family viewed The Panagia (Virgin Mary) of Tinos as miraculous, saving many maritime boats. “This icon and island of worship was important to Romans (Greek) of the enslaved Aegean islands and Asia Minor. The Church gave them hope that they would be free. Thousands would come every year to worship at the Evangelistria Church. They came to pray for the rebirth and liberation of their enslaved country. Here, in this Church, in this institution, in this island, the still unfree Greeks met the freed children of Greece on free Greek soil. The seeds of revolutionary spirit were cultivated against the Turkish yoke. The pilgrims took this revolutionary spirit back to their country.”3

The Tour’s members helped me secure an air conditioned seat opposite the miraculous icon. I sat there for four hours. The Elli Mausoleum is dedicated to the first victims of WWII in Greece. The members of the crew Elli battle cruiser was torpedoed on August 15th 1940 by an Italian submarine in Tinos harbor. A monument and artifacts are part of The Elli Mausoleum. The Antonis Sohos Museum of Sculptures and Museum of Tinian Artists is on the church premises. Artists who donated their sculptures and paintings include: the Fytalis Brothers; Dm. Filipotis; Lazaros Sohos; Gregoris Vitalis; paintings by Nikiforos Lytras, and Nikolaos Gizis. The Collections of Icons and Clerical Treasures have royal doors depicting the 15th century St. George and St. Demetrios from the Church of St. Demetrios in Karia. These royal doors were exhibited in the 2002 Metropolitan Museum in New York City exhibition “Byzantium: Faith and Power”. We were unable to see the famous “Chart of Rigas Ferraios” that was being restored. We saw the Patriarchal seal of patriarch Grigorios 5th, ring of Theodore Kolokotronis and Olympic medal from Pyrros Dimas and others.4

On our second day, the bell tower was ringing every 15-20 minutes on Sunday. Everyone stopped all actions and made their Greek Orthodox cross at the sound of the bell. This was continuous all morning. I was amazed, never seeing this before. I visited the Archaeological Museum, had a coffee frappe at the harbor watching boats, window shopping and lunch at a seaside tavern. Swimming was not very inviting in the town. One must leave town and go to the villages. Komi had an Artichoke festival on June 5th. Artichokes are a major product made in main dishes and sweets. The return trip was enjoyable with singing, jokes and laughter. The parish council of the Metamorphosis Church gave every excursion member a gift; a booklet on the history of the Evangelistria Church. Tinos is a beautiful island with shuttles to Mikonos and Santorini. It has something for everyone’s interest.