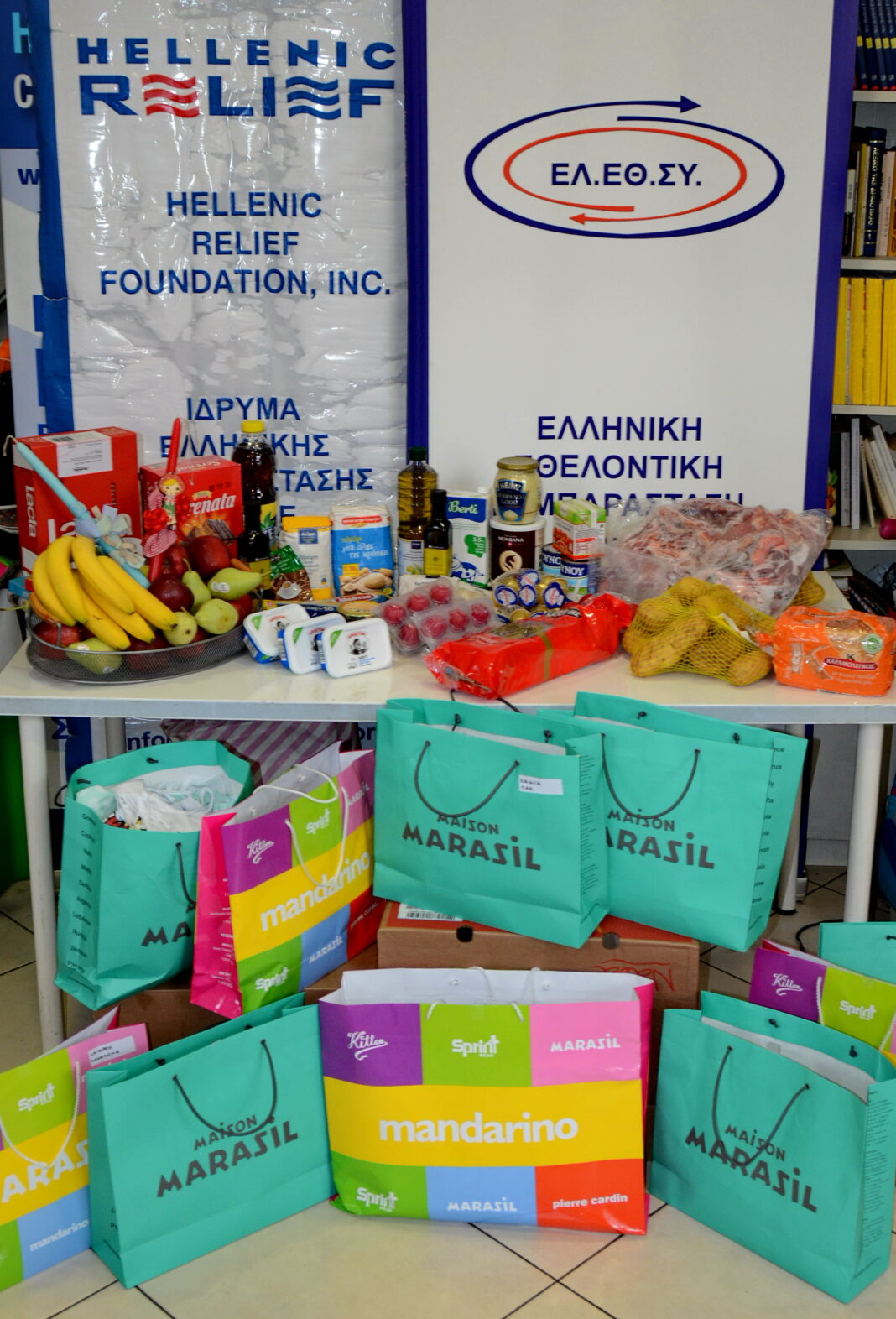 Continuing their annual tradition, the Hellenic Relief Foundation and their partner organization held the Easter distribution at their headquarters in Athens, in partnership with the Social Committee of the Athenian Society, from Palm Sunday through Holy Wednesday. The food packages contained non-perishables (pasta, rice, flour, oil, etc.), as well as the traditional lamb, tsoureki, red eggs, potatoes, and more. In total, around 700 parcels were given to financially weakened families and single households that are supported on a monthly basis. Gift certificates for food purchases were also provided compliments of the Sklavenitis Group, Agrovim, and the N. Konstantopoulou Group.
Due to the circumstances surrounding the pandemic, the traditional Easter children’s celebration was unable to take place again this year, however, new clothes and shoes, lambades, and sweets were provided to their guardians on an individual basis, avoiding overcrowding.
In addition to the distribution to the beneficiaries, food packages were also given to the Journalists’ Union of the Athens Daily Newspapers, Mutual Assistance Fund for Retired Actors (ΤΑΣΕΗ), the Society for the Collective Management of Singers ERATO, the Special Needs School of Piraeus, the Assocs. of Parents and Guardians of the Intellectually Disabled St. Nicholas and Sts. Anargyroi, the Christodouleio Foundation, and the Meropeio Nursing Home of Athens. Also, food and lamb parcels were given out to families outside Athens, including Kavala, Patra, Epirus, Kerkyra, and Spetses.
Corporate donors for this distribution included Frangos SA, the Social Committee of the Athenian Society, footwear companies Parex, Meridian, and Buffalo Minoglou-Plast, N. Konstantopoulou Group, Charisiadis Food Group, FrieslandCampina, Agrino, Coca-Cola 3E, Food Bank, Pindos, Karamolegos, Arla Foods, Tottis Bingo, Melissa Kikizas, Loulis Mills, Agrovim, Kamilaris AEBE, the non-profit Mission Anthropos, and the Second Farmers Market of Athens, who through their president, Mr. Mouliatos, provided the potatoes, fruits, and red eggs.
It is worth noting that a portion of the funds supporting the Easter distribution came from the proceeds of the Hellas FM radiomarathon held in New York last November.
The COVID-compliant distribution was organized under the direction of Ms. Maria Siourdi, director of the H.R.F’s partner organization, and with the assistance of volunteers Soula Belli and Emy Spanou.
Photo Credit: Stavros Tsakiridis
Share
Facebook
Twitter
Pinterest
WhatsApp
Linkedin
Email
Viber