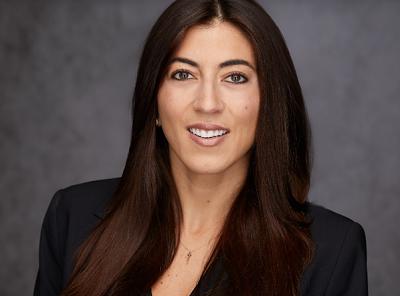 Illinois Governor Bruce Rauner announced the appointment of attorney Anastasia Palivos to a five-year term as a commissioner of the Illinois Commerce Commission on Jan. 23.

In supporting the nomination, the highly successful chairman of the Illinois Commerce Commission, Brian J. Sheahan, stated that Palivos has the legal background and previous experience working at the Illinois Commerce Commission which prepared her for a new role as commissioner. He also applauded Governor Rauner “for his ongoing commitment to appoint the most diverse regulatory commission in the country.”

Palivos becomes the first Greek-American woman appointed to the Illinois Commerce Commission, and at age 28, she becomes the youngest-ever commissioner in the history of Illinois.

“I am honored by this appointment and am grateful to Governor Rauner for his  commitment to investing in the next generation of leaders in government,” Palivos said. “Public service is important to me, and I am humbled by the opportunity to provide public service to the citizens of our state. I look forward to having an open and transparent dialogue with all interested parties and stakeholders, and I am ready to tackle the challenges ahead as we navigate the future of the industries we regulate.”

The Illinois Commerce Commission is a quasi-judicial body that regulates public utilities, including electric, natural gas, telecommunications, water and sewer. It also regulates all interstate commerce, commercial motor carriers, railroad tracks, and all railroad facilities in the state of Illinois.

Palivos is a founding member of the Hippocratic Cancer Research Foundation, which is involved in cancer research through the Northwestern University Medical Center. She is also involved with the Greek Orthodox Church, Greek Orthodox International Charities, Leadership 100, American Cancer Society and American Diabetes Society.

Palivos is the daughter of philanthropist Vicky Palivos and Greek-American national leader attorney Peter Palivos. In 1991-92, when the former nation of Yugoslavia disintegrated, there were efforts by Slavic leaders to create a new Slavic nation under the name of “Macedonia.” At that time, Peter Palivos used his personal friendship with  President Bill Clinton and former U.S. Senator Carol Moseley-Braun to block the recognition of Macedonia by the United States government. After failing to be recognized by the United States government  as “Macedonia,” the newly formed Slavic nation was recognized as FYROM, which is the nation’s current name. For his efforts, Peter Palivos was honored by former Greek Foreign Minister Pangalos and Prime Minister Mitsiotakis.

Anastasia Palivos is committed to continuing her family’s history of public service and  her goal is to increase the role of Greek-Americans in government.