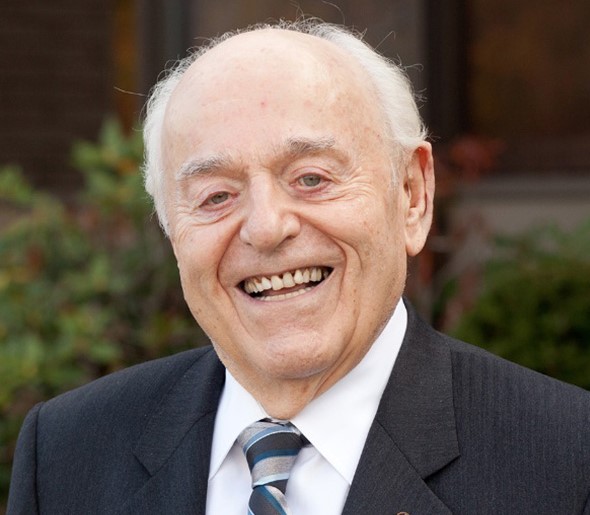 The Archbishop Iakovos Leadership 100 Fund mourns the loss of a beloved Founder and esteemed former Chairman, Arthur C. Anton, Sr., who passed away on July 26 at the age of 95.

As one of the seven Founding Members and the Chairman who oversaw our phenomenal growth from 2000 to 2004, Arthur gave his heart and soul to Leadership 100.

With his beloved wife of 67 years, Madeline, who passed away in 2018, he presided over Leadership 100 with grace and wisdom, imparting his love to all.

Invested as Archon Depoutatos by Archbishop Iakovos of Blessed Memory, the Founder of Leadership 100, he was a dedicated Christian who unselfishly served his Church at every level for decades, with honor and dignity.

A legendary business leader, as President and CEO of Anton’s Cleaners from 1950 to 2000, he developed the company into the largest dry-cleaning operation in New England and one of the largest in the United States. He was noted for his many philanthropic projects and activities.

Arthur proudly served his country in the U.S Army Air Force through the conclusion of World War II. After the war, he attended Boston University, where he graduated in 1950 with Honors.

A true gentleman, he was noted for his compassion for others and was revered by his native community of Lowell, Massachusetts, and in Boston, Chelmsford and North Andover, and wherever he lived or traveled.

We extend our heartfelt sympathy to the Anton family for the loss of their beloved father, grandfather and great grandfather.

We will pay full tribute to Arthur by devoting the next issue of The Leader to him and to his exemplary service.