CommunityIn memory of Kostas Georgakis (1948 - 1970), the Corfu student who...
CommunityGreeceCulturePolitics

Coordinator of the Municipal and Management College of Rhodes

“I cannot but think and act like a free person”

Kostas Georgakis was the man who had long been ready to say “yes” to sacrifice and “no” to the Greek Military Junta.  Forty-eight years have passed since Georgakis’ great sacrifice, and as a duty of honor and memory, we cite these words with the belief that values, ideals, and sacrifice do not fail as long as they pass.  In 1970 I was a student at the same High School where Georgakis studied and was discussed after a long time with utter secrecy.

Born in Corfu on August 23, 1948, he graduated from the Second Gymnasium in Corfu and was a member of the Center Union party of Georgios Papandreou. While studying geology in Italy in July 1970, he anonymously revealed in an interview that the Junta of Athens had infiltrated people and eroded Greek student organizations in Italy with the aim of finding ‘Democratic’ students.  His identity was immediately known, and because he was afraid for the fate of his family in Greece, he decided to make an impressive act that would bring the international public’s attention to the situation in Greece.

On the evening of September 18, 1970, he wrote a letter to his father, saying: “Your son is not a hero, I am human like all others, perhaps a bit more fearful … Kiss our land for me.”  After finishing the letter, he left his house and stuck a picture of Andreas Papandreou on the windshield of his car, and drove off to Matteotti Square in Genoa. Upon his arrival, he took three bottles of gas from his trunk and headed for Palazzo Ducale’ steps, where the city’s courthouses were then housed.  He poured gasoline over his whole body, lit the match and set himself on fire. The flames wrapped around his youthful body, and although he suffered terribly, as a witness, he had the mental power and the courage to shout: “I did it for Greece’s sake, I want democracy, all the Italians exclaim: Long live free Greece.”

Immediately after, Italian workers carried him to the hospital where he left his last breath ten hours later. 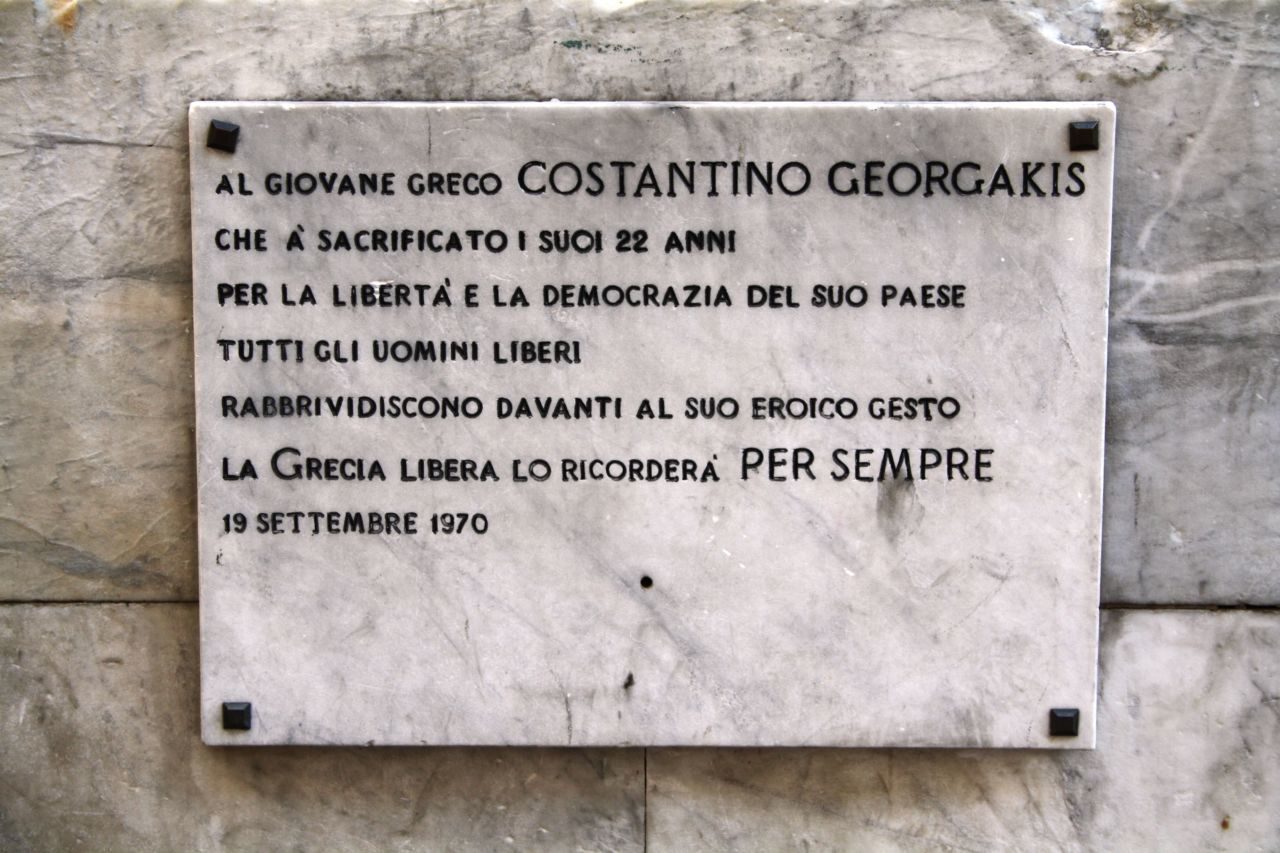 At the point of sacrifice in Matteotti di Genoa, there is a commemorative marble plaque with the inscription in Italian:   “Greece will remember him forever”

Translates to:  To the young Greek Konstantinos Georgakis who sacrificed his 22 years of Freedom and Democracy for his country. All free people are shine in front of his heroic gesture. Free Greece will remember him forever.

For obvious reasons, the Greek Military Junta silenced the event and allowed the transfer of Georgakis’ body to Corfu after four months, fearing the popular reaction. The act of student hero Kostas Georgakis awakened international public opinion about the situation in Greece, which was under the Regime of the Colonels, also known as the Greek Military Junta. 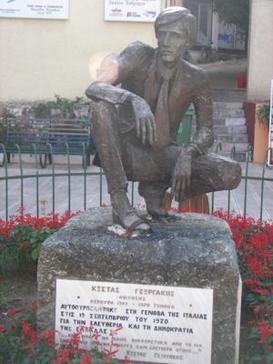 The tomb of Kostas Georgakis is located at the 1st Cemetery of Corfu. A small square of the city bears his name, while a monument which has been built in his honor.  The self-sacrifice of student Kostas Georgakis is a unique and distinct symbolizing the resistance against the Greek Military Junta, a precursor of the Polytechnic uprising, along with the attempt against Papadopoulos by Alekos Panagoulis and the Polytechnic rebellion.