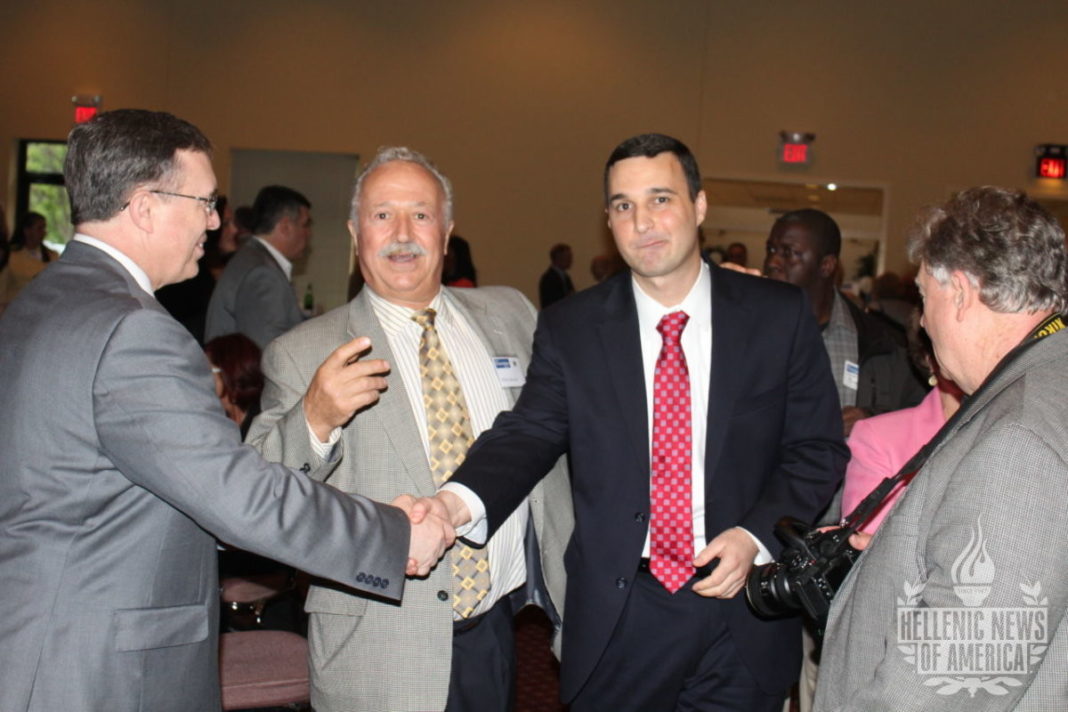 Since being elected mayor of Annapolis, Maryland in November 2013, Mike Pantelides has not stopped pushing the envelope.

“One of the things I’ve learned is you have to be innovative, think outside the box,” Mayor Pantelides said at a recent fundraising event in Annapolis.

His accomplishments to date include a renewable energy park nearly completed at the site of a closed landfill, a renovated downtown, a $7.5 million project to help control flooding, improved communications with the public and a fiscally sound government that has managed not to raise taxes.

He doesn’t take all the credit, however.  “I thank the transition team for their involvement, city council. I thank all the people I’ve met because helping people and meeting people is the best part of the job.  It reminds me of why I ran for office,” Mayor Pantelides said.

The 32-year-old Republican mayor, who is Greek Orthodox, was born in the city he now governs. According to Wikipedia, he has served as an at-large member of the Annapolis Central Committee, was president of the Germantown-Homewood Civic Association and has volunteered with Annapolis Jaycees, Habitat for Humanity and 21-st Century Education Foundation.  Before becoming mayor he sold government relations software with Vocus, a cloud marketing software firm.

Maryland State Sen. Edward R. Reilly (R-33) who introduced Mayor Pantelides at the fundraiser, talked about the mayor’s potential when he graduated in 2002 from Archbishop Spalding High School.  “In the stands was this little, skinny, quiet kid.  He didn’t say much to anybody,” Sen. Reilly said. “But in 2002, as he walked across the stage…he had great potential.

“We weren’t quite sure what kind of work he was going to do but we knew that he had a vision to give back to the community.”

Students at Archbishop Spalding were required to perform community service. Mike Pantelides was in the Boy Scouts, attaining the rank of Eagle Scout. He also was out helping non-profit groups during his high school years.

“We fast forward 13 short years to January 2013 and I know most of you were joining me at Maryland Hall for the swearing in of this fresh-faced, idealistic visionary who wanted to do great things for the city,” Sen. Reilly said. “Mike Pantelides at a young age has shown leadership. He has shown maturity much older than his age chronologically. Mike has faced difficult decisions as mayor of the city and he has done well.”

Pantelides ran a “Sweep Annapolis Clean” platform, crusading to change policy and processes, according to Wikipedia.  In his first 100 days, he reorganized departments and created initiatives to support business and economic development.   He wanted an inclusive approach for citizen involvement and created the Language Bank, made up of a team of 61 residents that speak 23 different languages to help the government communicate with the public.  He brought in a Hispanic liaison to work with local faith based groups and the growing Hispanic community.

“One of the first things I did was a faith-based initiative,” Mayor Pantelides told the crowd of 350. “I had over 40 people, whether they were Christian, Jewish, whatever denomination, come together… to hear from you about the challenges they were facing and what I can do to help them, not tell them what they can do for me.

“The challenges we face are hard—heroin epidemic, flooding, crime, all these things you have to face it. The only way we can eliminate them is facing it together.  Government can’t do it all,” the mayor said.

He reminded the crowd that before he came to office, the city was on an unsustainable path.

“We were living beyond our means. We were treating the taxpayers like an ATM.  The previous administration had raised taxes twice, doubled the water bills and had to borrow $10 billion just to meet payroll,” he said.

Since he took office, the fiscal picture has turned around.  They’ve cut two consecutive budgets without raising taxes, cut trash fees by 30 percent and put money back into people’s pockets, he said proudly.

One crowning achievement of his administration is the Annapolis Renewable Energy Park.  A 20-year lease was signed Aug. 3, 2015 for the park, which coverts sunlight into electricity on 80 acres of a closed landfill in Anne Arundel County.  It’s a 16.8 megawatt solar photovoltaic project and one of the largest solar energy projects in the world. It will produce 21,822,000 kilowatt hours of carbon-neutral electricity, offsetting greenhouse gas emissions equivalent to 3,168 passenger vehicles or the amount of carbon generated by the electrical needs of 2,070 homes in a year.

“The city had a closed landfill that was costing us money every year. We turned it around,” Mayor Pantelides said.  “We’re going to put up 50,000 solar panels. It’s going to bring in $5 million for the city, create jobs and clean up our environment.”

The mayor also talked about a revived city downtown area. “We built that on schedule and a million dollars under budget by solid management and leadership,” he said.

Then there’s the $7.5 million bulkhead project. According to an Associated Press news story published Oct. 23, 2015 in the Washington Times, the city replaced a failing bulkhead on City Dock in Annapolis, preventing worse flooding along the dock, helping to stop the downtown’s slow descent into the bay.

Another success story? The permanent reopening of Market House, a staple of Annapolis for hundreds of years.  In 2003, when Tropical Storm Isabel came into the area, the Market House was flooded and despite efforts to maintain the building, it had been open only intermittently since. Under Pantelides’ administration, the Market House received upgrades and opened for good in 2013.

Looking to the future, he sees only the positive for Annapolis.

“I think the biggest challenge we face is that we stop believing in ourselves. We can do anything that we can put our minds to.”