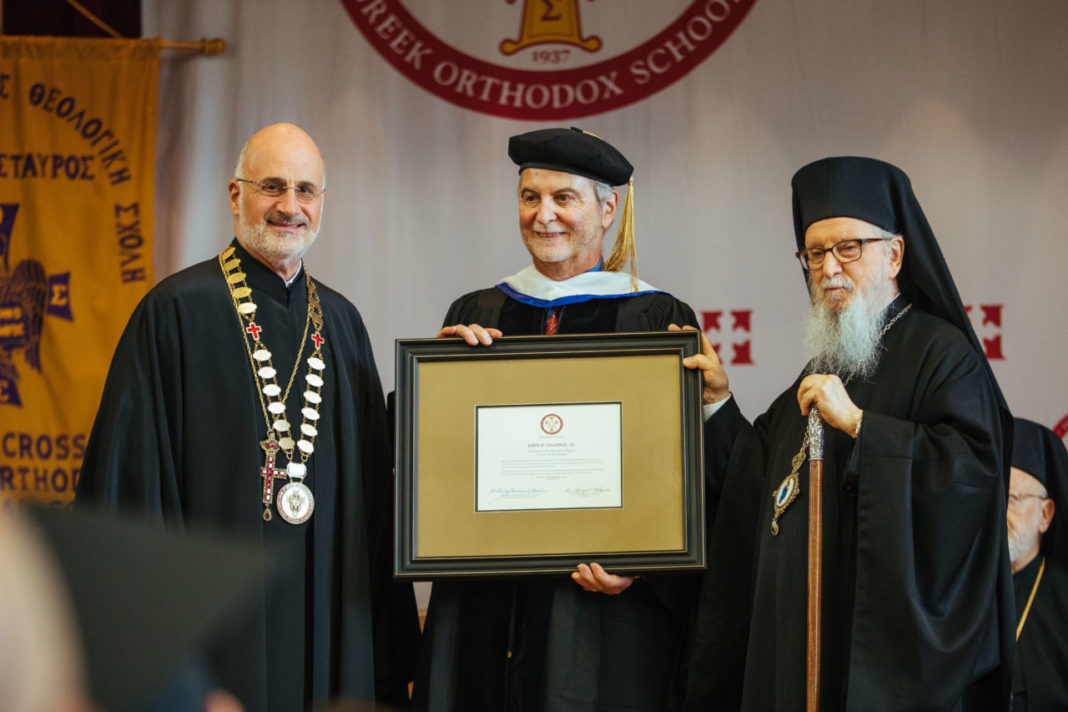 Greek-American businessman John P. Calamos, founder and global chief investment officer of Calamos Investments in Naperville, IL, was awarded an honorary Doctorate of Humanities during the Hellenic College Holy Cross (HCHC) 2018 Commencement held May 19 in Boston. In addressing the graduating class, he spoke of the importance of philosophy, faith and heritage.

Born to Greek immigrant parents, Calamos was raised on Chicago’s West Side. His family operated and lived above a local grocery store in the area which then had a significant Greek population.

Mr. Calamos said, “Graduating from college for many is taken for granted. But not for me. I’m from a Greek immigrant family that came to the United States and struggled through the years. Our family values and strong work ethic was very valuable to me.

“I was the first of any of my family and relatives to go to college and along with my family values it gave me the foundation for any success I achieved,” he added.

He attributed his interest in philosophy to his Sunday school experience and later his college education where he gained knowledge about the history of the world through philosophy. That led him to have endowed and donated to his alma matter, Illinois Institute of Technology, a Chair in Philosophy.

“I’m often asked why I endowed a Chair in Philosophy,” he said. “Philosophy stimulated critical thinking and new ideas. It asks, ‘What assumptions did you use here and why did you use them?’”

Many think of math skills when considering investments and economics. Calamos told the graduating class and guests that economics is not a math problem. Rather, it’s economic philosophy and it considers how we are organized as a society. He quoted Socrates, “Know thyself,” and said that philosophy teaches us not what to think, but how to think.

“As you received your degree today, what you are doing going forward into the ministry is extremely important,” he told the graduates. “I commend you and encourage you to teach the younger generation the importance of faith whether or not you go into the ministry.

“I did not realize at the time, going to church and Sunday school, how important faith would be for me,” he explained. “It created a value for me that became more important over the years.

Calamos also is a veteran US Air Force pilot who served 5 years active duty and 12 years in the Reserves flying B52s and jet fighters. In Viet Nam he flew hundreds of combat missions as a Forward Air Controller (FAC).

“FAC were there to support the ground troops by controlling fighters to help them in time of need,” he explained.

“Remembering my prayers from Sunday school, I began praying every day,” he said. “In combat you make many life and death decisions. I still thank the Lord for bringing me home safe and helping me make the right decisions at critical times.”

As Chairman of the National Hellenic Museum, Calamos also strongly believes in the preservation of heritage as a core family value and a basis for teaching and learning.

“It’s important that we remember our heritage and use that to motivate future generations, he said. “You don’t know where you’re going unless you know where you came from.”

In closing, Calamos reiterated his message on critical thinking, which was a culmination of his education in philosophy, faith and heritage. He told the graduates, “As you go forward remember, you are here not to teach them what to think, but how to think. Do not forget that.”