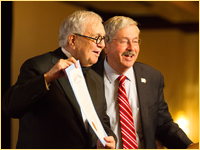 The John Pappajohn Entrepreneurial Centers at five universities in Iowa, along with the State of Iowa, celebrated the 20th Anniversary of the establishment of the Centers through the generosity and vision of their founders, John C. and Mary Pappajohn of Des Moines, Iowa, long-time member of Leadership 100.

At an event at the Des Moines Marriott Hotel on September 15, Iowa Governor, Terry Branstad, who also served as Governor when the Centers were founded called the Pappajohns more than “benefactors”, but also visionary reformers of the universities.

The Pappajohns initially gave $1 million in 1996 to each of the five universities: Drake University, Iowa State University, North Iowa Area Community College, the University of Iowa and the University of Northern Iowa. At the time, entrepreneurial activity in Iowa had slowed with businesses closing and the agricultural sector in crisis. Since then, the Pappajohns have given more than $25 million to the schools. In collaboration with the state, the presidents of the universities, and directors of the Centers, the Pappajohns are credited with reversing the situation. Many of the companies that emerged from the centers are amongst the most successful enterprises with a global reach, according to Branstad.

In attendance, along with the Pappajohns were John’s brothers, Aristotle and Socrates, their wives, Barbara and Elaine, their Daughter, Leadership 100 member Ann Vassiliou and her husband, Argyris Vassiliou, who serves as Vice Chairman of Leadership 100.

The Pappajohns also have given more than $100 million to medical schools and research centers in Iowa and other states and are major supporters of the arts, having established, among other major gifts, the acclaimed John and Mary Pappajohn Sculpture Park at the Des Moines Art Center.

Based on contents of an article in The National Herald.