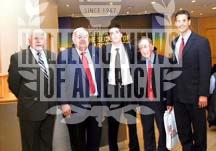 Every guest had the opportunity to discover how an international team of experts resurrected the hidden manuscript of the ancient world’s greatest thinker, Archimedes of Syracuse. The event started with a light reception, and continued with a speech given by the curator, William Noel. A guided tour to the exhibition followed and the event ended with another reception.

The President of the Johns Hopkins Hellenic Students Association, Mr. George Petrocheilos, played a very crucial role in making this event happen. In June, Mrs. Anna Pappas invited him to attend a meeting at the Walters. The topic of the meeting was how to promote the Archimedes Palimpsest to the Baltimore community: ‘‘When I was at the meeting and found out more about the Archimedes manuscript I was convinced that it would be a great idea if the Johns Hopkins Hellenic Students Association could co-host an event at the museum in order to promote the exhibition ’’, Petrocheilos said. However, it was not as easy as it sounds: ‘‘at the beginning, everyone thought I was crazy! Students have never hosted an event at the Walters before, but that did not discourage me at all. I had to arrange many meetings and make even more phone calls, but in early September I got the final ‘yes’ from the administration ’’.

Petrocheilos, along with Mrs. Anna Z. Pappas and Ms. Andrea Vespoint (the Walters Community Outreach Director) organized an amazing event, which left a great impact on everyone attending. Every aspect of the evening was very well organized. The exhibition was set up in a way that integrated a 2,400-year manuscript with the science and technology of today. Another impressive aspect of the event was the number of prominent guests that it attracted: Mr. Aris Melissaratos (Former Maryland Secretary of Business & Economic Development and former Chief Technology Officer of the Westinghouse Electronic Corp.), Congressman John P. Sarbanes, Mr. Nick H. Tsakalos (Co-owner of the H&S Bakery, Northeast Foods, Schmidt and Harbor East Development), Mr. Gregory C. Pappas (Founder and President of the Greek America Foundation), Mr. Paul Kotrotsios (President of the Hellenic American National Council), Mr. Chrys P. Kefalas (Health Care Practice Attorney at the U.S. Dept. of Justice and former Dep. Legal Counsel of Governor Ehrlich), Mr. Jason Filippou (Executive Director of the Greektown CDC) and Michael S. Kosmas (Leading Hospitality Attorney) were among the guests. That was a result of George Petrocheilos’ extensive personal network. Petrocheilos, a Greek native, came from Athens two and half years ago, and since then he has been very involved with the Greek American community and has built personal relationships with most of the attendees. Mr. Aris Melissaratos confirmed the above statement by saying that: ‘‘Mr. Petrocheilos’ enthusiasm and incredible networking ability rallied a significant cross section of Baltimore’s Greek American Community to attend the lecture and see the impressive exhibition. This was a gathering of elected officials, industry leaders, academic leaders, community leaders and regular citizens from throughout Baltimore’s Greek Community. A real accomplishment by Mr. Petrocheilos.”