Love at first bite at Athens To Kati Allo 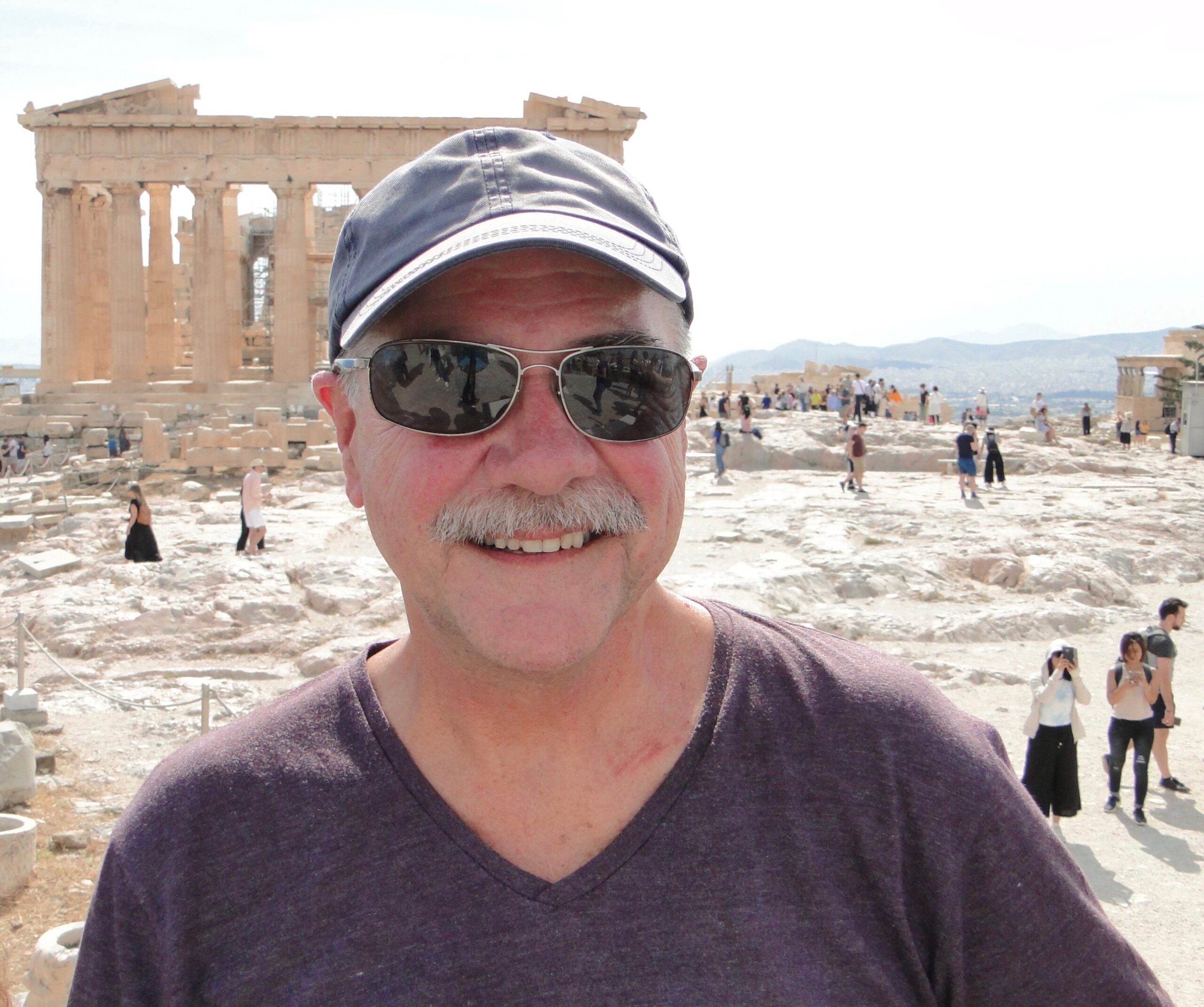 It was the same for Jennifer Hoenig, “It was love at first bite,” describing her dinner at To Kati Allo when she first met Konstantinos Bakatselos, the owners’ son. Born in America’s heartland, Jennifer was doing graduate studies in Athens. Now married, they are raising a third generation of Bakatselos that just may continue the 30-year-old taverna. This is not tradition triumphing over the modern era; it is the modern era.

Food as an integral part of society has been embedded in Greek culture for thousands of years. “It’s a big thing for Greeks to go have a coffee at a café and talk for three hours,” says Jennifer. A taverna is a social gathering spot as much as the pub is to Ireland and the diner to America.

Yet the ingredients, unlike in many first world nations, are solidly Greek. This mountainous southernmost peninsula of Europe’s Balkans is blessed with multiple climate zones providing an abundance of agricultural products, and its tight knit society based on the extended family ensure a distribution system that has little need for a 21st century processed food industry.

Jennifer’s mother-in-law, Ioanna Bakatselou, described a life journey typical of entrepreneurial personalities worldwide. One of eight children, Ioanna left her village in the Peloponnese as a teenager decades ago. The Second World War and a horrendous civil war that followed left rural Greece in a prolonged economic shambles.

The population was encouraged to relocate to its empty urban centers, especially Athens. Settling in the Koukaki neighborhood at the foot of the Acropolis, Ioanna started working in restaurants before opening a sandwich shop a few storefronts down from To Kati Allo’s present location on Hatzichristou Street.

Prior to the 1980s, the ancient districts surrounding the Acropolis were hardly the fashionably vibrant neighborhoods of today. Ioanna said there were a few tourist shops and cafes, but the districts were primarily working class residential apartments. Even though she never intended to be a restaurateur, as her skills improved so did her ambitions. Thirty years ago she moved a couple storefronts down the street into the former motorcycle shop of a regular customer who wished to retire and, with her husband Leonidas Bakatselos, opened To Kati Allo as nothing more than a neighborhood taverna serving the comforting dishes loved by working Greeks.

Fifteen years ago ambitious plans were set in motion by the Greek government that would transform the ancient neighborhoods. Massive long-term restoration of the Parthenon commenced and construction of the state-of-the-art Museum of the Acropolis, literally across the street from To Kati Allo, spurred development of residential restoration, hotels, cafes and wide pedestrian walkways. Yet despite the proliferation of restaurants catering to thousands of contented tourists, To Kati Allo remained true to its roots as a neighborhood taverna.

The simple neon lit space with plastic tablecloth covered tables hums with the conversations of regulars and tourist alike despite its proximity to dozens of fashionable cafes. Perhaps the exterior chalkboard menu listing dishes at prices well below the tourist venues catches the eye first, but it’s the quality of the dishes that make new customers linger well past midnight. America’s much touted farm-to-table concept has little relevance in Greece simply because that’s always been the system.

In rural areas everything is farm-to-table with many tavernas located close to their suppliers. In Athens some restaurants advertise farm-to-table for tourists but reality is the same since the markets buy from local farms. To Kati Allo’s olives, olive oil and some produce come from the Peloponnese farms of family relatives, a common situation even for the restaurants of resort hotels.

Leonidas and Konstantinos open the taverna at 7:30 a.m. serving the simple breakfast foods Greeks love – strong coffee, bread, cheese, olives – and start the slow grilling of meats over hardwood charcoal. Then it’s off to the markets for Leonidas. The Monastiraki district, on the north side of the Acropolis, has hosted markets in Athens for over 2,000 years. Both the ancient Greek and Roman agoras are located within the district.

Its narrow streets teem with small shops and the vast Central Market which overflows with the produce, cheeses, meat, fish and seafood that will appear that day on both family and restaurant tables. Leonidas, like many taverna owners, will shop there nearly every day while Ionna and Jennifer will pick up supplies at the weekly markets such as Friday’s Laiki farmers market.

“It takes a lot of time,” Ioanna admits, “But we have been buying from many of the same people for the past 30 years. We try to buy 100% Greek.” These personal relationships both ensure consistent quality and keep prices reasonable. Staffing a taverna with family keeps costs in check as well.

“Food in Greece is cheap,” added Leonidas. As a former taxi driver, he’s well aware that some drivers and hotel staff accept payments from restaurants that cater to tourists to steer them to their establishments. “We don’t do that,” Leonidas is emphatic, adding that he considers that stealing. “We want customers to come to To Kati Allo because of quality and fair prices.”

The quality is obvious once the dishes are set on the table. Greek salad is served with a massive slice of herbed feta cheese, tomatoes, olives, red onion, cucumbers and lots of fresh olive oil – no greens or vinegar in a real Greek salad. The feta’s creamy and not salty.

The lamb for which Greece is justifiably famous is not fabricated into the uniform lollipop chops Americans demand. Standard cuts are mixed and slow grilled over hardwood charcoal. It’s lean yet moist and fork tender. Served with fresh lemons, the juice enhances the flavors.

Grilled whole bream is accompanied by a medley of zucchini, potatoes, eggplant (aubergine), tomatoes and garlic. The bream has a crisp skin and moist white meat. Crepes are light with a filling of unsalted cows milk ricotta cheese and fresh spinach. The taste of fresh spinach dominates.

Desserts in a taverna are simple. A smooth ice cream with hints of berries and honey arrived. By law a taverna must sell two items, Greek coffee and spoon sweets. A small portion of an intense lemon spoon sweet is all that’s necessary to complete a satisfying meal. The tradition of spoon sweets, and their revival, is a fascinating story of its own.

Ioanna explained that for many centuries spoon sweets played an important role in Greek brides winning the approval of their future mothers-in-law. Before permission was granted for an engagement, the women of the boy’s family called upon the girl at her home. The prospective bride had to serve the women a spoon sweet that she had prepared, presented in a silver spoon on crystal dishes. If the quality of the spoon sweet was deemed worthy, the bride could take a deep sigh of relief.

The delicious lemon spoon sweet served at the end of my first dinner at To Kati Allo confirmed both why it is held in such high regard and served in such a small portion. The flavor of the lemon rind was intense despite having been slowly simmered in sugar and water, and the syrup itself was a perfume of citrus. Yet more than one spoonful of this sweet at a time would most likely make your teeth ache.

Long regarded as a symbol of Greek hospitality, spoon sweets are traditionally offered to guests upon arrival, accompanied by a glass of cold water. And it’s not uncommon for both a home and a café to serve them along with strong Greek coffee. To Kati Allo’s lemon spoon sweet, with the thick rinds of Greek lemons, are made by a family relative, Soula Bramou.

Soula provided her recipe for orange spoon sweet. Since spoon sweets are not jam, using a zester to remove the rind will result in pieces too thin to hold up during the cooking process. (During the final cooking stage in the syrup it is strongly advised to use a candy thermometer).

Although in Greek tradition spoon sweets are eaten on their own, they pair well with plain cake or as an ice cream topping. Citrus rind is not the only ingredient used in making spoon sweets. Nearly any type of fruit such as cherries, kumquats, figs, raw versions of nuts like walnuts, pistachios, almonds and even baby cucumbers and cherry tomatoes can all become spoon sweets. When preparing non-citrus foods, add some lemon juice

The pleasant evening temperature, the lack of car horns and loud music coupled with the sounds of conversation and relaxed dining – Greek national pastimes – create a culture in contrast to the 21st century’s frenetic pace. Perhaps that’s why Rick Steves has recommended To Kati Allo in several editions of his Athens guide. Perhaps that’s why Jennifer “fell in love at first bite.”

Taverna To Kati Allo, Hatzichristou 12, Makrigianni, Athens, Greece (directly behind the new Museum of the Acropolis).

Previous article
Christina Vasiliou, 94 has passed away peacefully
Next article
On The Road In Greece: Visiting the Amphitryon in Nafplion