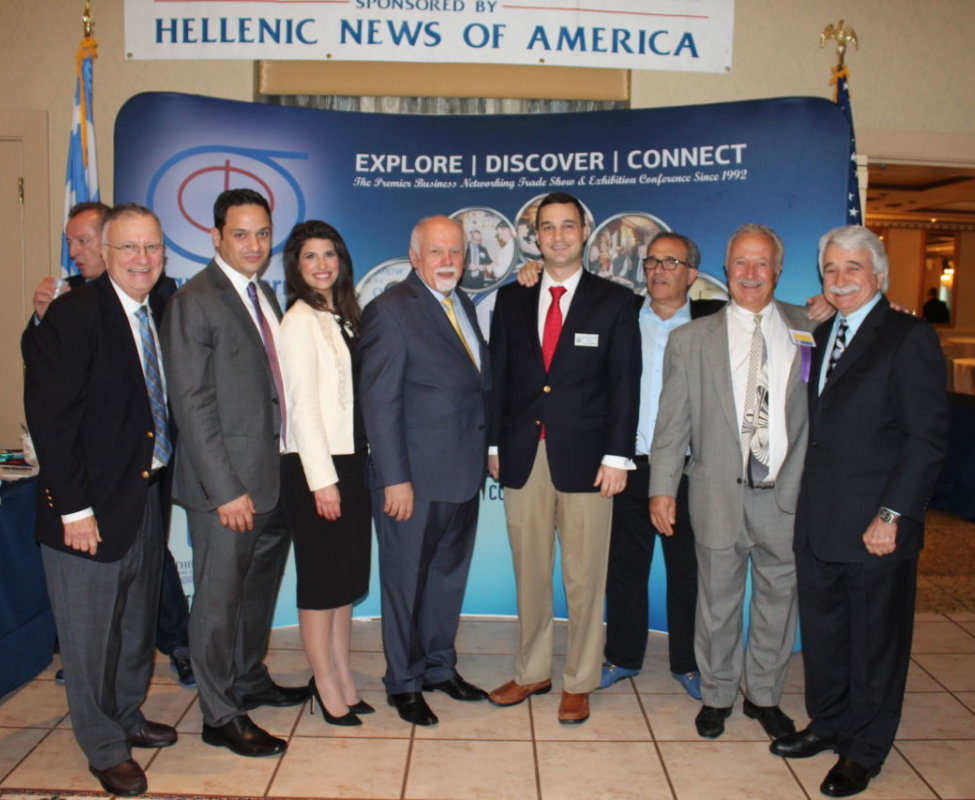 A handshake and a greeting. A conversation. Product demonstrations. Free samples. An exchange of information.

In this digital age, the 26th annual Hermes Expo offered something of great value to businessmen and women—a chance to connect in person with each other.

Judging by the turnout and response from the hundreds of visitors to this year’s Expo April 26 at the Concordville Inn in Concordville, Pa., it’s safe to say that the boutique trade show achieved its goals. Vendors, speakers, honored guests and dignitaries left with business cards in their pockets and smiles on their faces, everyone eager to follow up and put into practice what they learned at the day-long event.

Guests there sampled imported Greek delicacies and wine as they listened to speakers and panel discussions showing the duel benefits of importing products from Greece, both to help the Hellenic Republic and for businesses in America.

This year’s Expo theme, “attend and succeed” was targeted toward helping businesses connect with other businesses. There were opportunities everywhere. Focusing this year on the hospitality industry, scores of exhibitors showed off products and services, and provided a taste of what they had to offer.

“Our purpose here is to connect on a personal basis, promoting your product or business,” said Expo organizer and publisher of the Hellenic News of America, Paul Kotrotsios. “An opportunity that gives you the face-to-face, business-to-business contact that is needed more now than ever before.”

Networking was in the air, and it was the main topic at the Expo’s luncheon. Keynote speaker Dr. Peter Stavrianidis, owner of Venus Jeweler and Gemologists, Inc. in Somerset, N.J., talked about “The Art and Magic of Networking: A System for Wealth and Success.”

“The key element of success, not only in business, but in an Expo like this, is the ability to network,” he said, in introducing his luncheon presentation.  “Networking is simply the cultivating of mutually beneficial give and take relationships.”  Giving, he said, is the most essential element of networking. When you give, things happen. With giving in mind, he introduced a networking system to interested entrepreneurs and sales people, showing how to encourage trust and develop potential relationships that lead to new opportunities.

His talk was part of the Theodore G.  Spyropoulos Seminar series, offered free to all visitors. Other speakers included:  Iris Kapo, an international trade specialist, who spoke about the business opportunities in Greece, including in the tourism industry; Chris Farias of Eastern Business Software who spoke on the use of technology to increase business productivity and security; and Jeff Abramson of Visual Marketing Resources, who talked about using the five senses to attract customers. Visitors were also treated to a presentation by The Mid-Atlantic -Eurasia Business Council on business opportunities in Eurasia and Belarus.

Guests continued to “explore, discover and connect” during the Hermes Expo awards dinner at 6 p.m. in the Grand Ballroom. Five individuals from various professions and backgrounds were honored for their work in helping others, continuing an Expo tradition. Each honoree brought an impressive set of credentials covering activity as diverse as building a church, treating a heart disease patient and using the tools of business and the elected office for philanthropic works.

The Expo also won the praise of dignitaries who stopped by. A regular visitor each year is Delaware County District Attorney Jack Whelan.

“On behalf of law enforcement in Delaware County, for all of our 42 police departments, including the Pennsylvania State Police, we are honored to be here tonight,” Whelan remarked during the award presentation to Councilwoman Morrone.  “As a representative of law enforcement I want to thank the business community and I also want to thank each and every one that’s here today for all you do to make Delaware County and the surrounding community in Pennsylvania, as well as the surrounding states, Delaware and New Jersey, great because of your participation and because of your dedication…”

The mayor of Annapolis, Maryland was in the crowd at this year’s Expo. Mike Pantelides, slated to be honored by the Hellenic News of America during its 30th anniversary celebration Oct. 29, offered a few remarks at the award presentation for fellow Maryland resident, Michael Stavlas.

“These two gentlemen have been stalwarts of the Greek community for so many years,” he said, thanking Paul for the opportunity to network on behalf of his election campaign.

Other groups recognized at the awards dinner included the Hellenic American National Council president Bill Mataragas and Members of the Executive Board that traveled from out of State and the American Hellenic Educational Progressive Association (AHEPA).

For the third year, high school seniors and college students with winning essays received scholarships through the Eleftheria Scholarship Awards. This year’s topic asked the students to write about which principles of western civilization could be attributed exclusively to Greek civilization and which to the Roman civilization.   A committee of 14 leading academicians, publishers, physicians and other professionals reviewed and selected the winning essays. The scholarship fund has grown in three years from $1,000 to $20,000 with all of the money going to the winners.  This year’s present scholarship winners are Eleni Pappas, Nick Pappas, Harris Avgoustis and Panagiotis Sassaris.

The Expo formally came to a close with the sounds of Stavros Theodorou and his orchestra playing a little Greek music as enthusiastic participants headed to the dance floor for a last bit of networking and some Greek dancing.