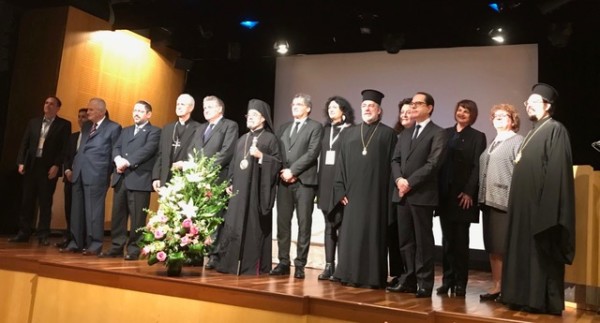 Under the auspices of the Ecumenical Patriarchate, a second international forum on modern slavery convened in Buenos Aires, Argentina, May 5-8, 2018. This forum, entitled Old Problems in the New World, was cosponsored by the Greek Orthodox Archdiocese of Buenos Aires and South America, and the Patriarch Athenagoras Orthodox Institute (Berkeley, California). The purpose of this gathering was to bring together distinguished practitioners, policymakers, theologians, and scholars, from within Latin America and other parts of the world to explore the myriad dimensions of the scourge of modern-day slavery.

The forum was held at the Ministry of Foreign Affairs of Argentina, with welcoming remarks from the President of Argentina, government officials, dignitaries and various religious leaders. A highlight of the opening session was the video messages from His All Holiness Ecumenical Patriarch Bartholomew, His Holiness Pope Francis, and His Grace Archbishop Justin Welby of Canterbury.

The program began with a compelling visual media presentation of the global scope of modern slavery, followed by a moving testimony of the impact of modern slavery on vulnerable populations of children and marginalized social groups. The greater part of the forum was structured around three panels, beginning with the theological foundations for understanding the Christian responsibility to eliminate all forms of enslavement of the person. The second panel identified the distinct and interconnected manifestations of modern slavery, including trafficking and smuggling, sexual exploitation, human supply chains, and the public health impacts of those practices. The final panel presented diverse programs and initiatives currently undertake by faith-based organizations and communities.

The forum produced A Common Declaration of Unity Against the Sin Human Trafficking and Modern Slavery. Signatories to the Common Declaration pledged to initiate and undertake every effort to heal the brokenness caused by modern slavery and to restore to watch and every person their God-given dignity.

His All Holiness Ecumenical Patriarch Bartholomew has appointed a commission that will address these multifaceted and complex issues of human slavery. The commission includes: His Eminence Metropolitan Nikitas of the Dardanelles, V. Rev. Deacon Nephon Tsimalis, Dr. Elizabeth Prodromou, Presbytera Maria Drossos.