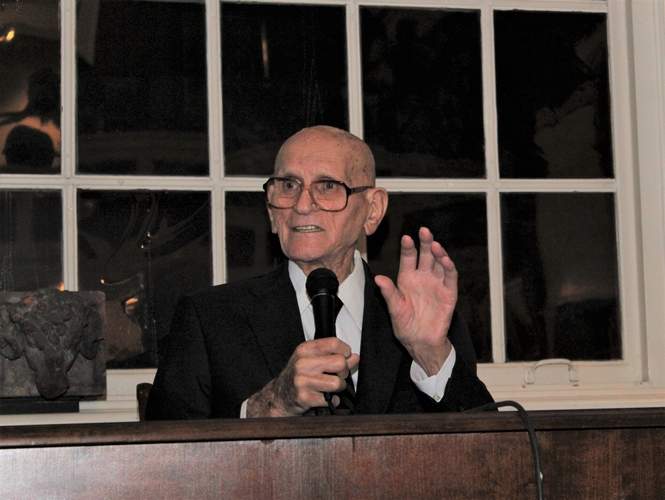 Gust C. Kraras, 97, passed away May 5, 2018, surrounded by his loving family in his Wyomissing residence.

Born in Terpsithea, Greece, he was a son of the late Christ J. and Ypapanti (Contos) Kraras.

Gust proudly served in the U.S. Army during WWII in the OSS, a precursor to the CIA.

A self educated businessman, Gust was the patriarch of the Kraras family businesses. He was the owner of the former College Inn at 14th and Union Streets across from Albright College. He went on to own The Lorraine Hotel and Restaurant, White Star Motel and other motels and restaurants in Wildwood, NJ. He went on to become the president and owner of White Star Tours, the family travel company based in Reading, PA.

Gust was a long-time and dedicated member of Sts. Constantine and Helen Greek Orthodox Church, Reading. His service to the Church began soon after he settled in Reading. He was asked to assist as a chanter, which he continued until his recent illness. He was first elected to the Parish Council in 1948 and had served as a member, secretary or president of the Council for most of the last 70 years. He has also chaired many important committees throughout the years, including the Annual Food Bazaar (which he initiated) for several years, the Church’s Library Committee, the Stewardship Committee, and the Celebration Committee. He was also the Editor of the Commemorative Albums in 1970, 1975, and 1989, the Testimonial for Father Tom and Gus Yatron in 1996, and the Consecration Album in 2001. Gust also chaired the committee in 1987, which completely renovated the interior of the church. He was instrumental in arranging for the major Iconography project that beautified the church. Gust chaired the Consecration Committee in 2001 and the Centennial Celebration Committee in 2014. For over fifty years, Gust oversaw the decoration of the Epitafio on Holy Friday and in recent years, underwrote the expense of all the floral decoration of the Church for Easter and Christmas.

Gust spent over 60 years in the Wildwood, NJ area, and was very instrumental with the building, beautification, and financial health of St. Demetrios Greek Orthdox Church of North Wildwood, NJ.

In 1990 Gust was vested with the title of the Archon Deputatos of the Ecumenical Patriarchate by Archbishop Iakovos, He was also a fulfilled member of the Leadership 100. In 1993, he was awarded the Medal of St. Paul by the Archdiocese, and the Archdiocese Laity Award. On May 11, 2002, he was given the distinction of being awarded the Ellis Island Medal of Honor.

Gust has been a member of the Order of AHEPA for many years. He served as District Governor in the Fifth District in New Jersey. In 2010, he was an instrumental force in re-organizing the local AHEPA Chapter. On June 1, 2015, Gust was surprised at the 90th Anniversary Celebration of the local AHEPA Chapter when the Chapter was renamed Gust C. Kraras Chapter No. 61 in his honor. He was also a member of the Masonic Order.

He is survived by his children: Christ G., husband of Ann (Baxewanis) Kraras; Angel P., wife of Mauro D. Cammarano; and Patricia “Tula”, wife of Bernard Donahue, all of Wyomissing. There are six grandchildren: Dean C., husband of Jennifer Kraras, Marisa C., wife of Scott Hunsicker; Andrew M., husband of Sophia Cammarano; Stephanie M., wife of Gregory Labe; Bernard N. Donahue, Jr. and Stavanna C. Donahue. There are also ten great-grandchildren: Mackenzie, Peyton, Christopher and Delaney Kraras; Tommy, Christo and Gram Hunsicker; Isabelle and Joseph Cammarano; and Jack Labe; all who will miss him very much. He is also survived by many nieces and nephews both in the United States and Greece. Three sisters-in-law: Joanne Dialectos, Christine Dialectos, and Anna Koumaras also survive him.