Special to Hellenic News of America  When you learn a language, you learn about the people who speak it.  Language is a tool to connect...
Read more
Culinary Tourism

The sun glints off white sand and aqua water as I walk down the stairs to Alikes Beach. One of six major beaches on...
Read more
Featured

Mariyana T. Spyropoulos has announced that she will be running again for Commissioner of the Metropolitan Water Reclamation District.  On Monday, December 13th, she...
Read more
Food and Travel

New York, 1st of December. This past Tuesday, wine lovers from New York City had the chance to experience the history and flavor of...
Read more PHOTO BY ANDREAS VRIONISSappho, the greatest lyric poet of Ancient Greece, was called by her contemporaries “Melifinous,” or honey-voiced.  It was one of the greatest compliments she could have been paid.  Her poems, sung to the accompaniment of the lyre, were so filled with emotion that  a man called “Solon, the Athenian,”  who was at a drinking party where the songs of Sappho were being sung, asked his nephew to help him memorize the words, “So I may learn them and then die.”

Such was the emotion caused by this “Melifinous Song Bird,” who lived 2,600 years ago.  Sadly, we will never thrill to  the sound of Sappho’s lyrics sung to the strings of the  lyre, but we can enjoy the contemporary  sounds of a choir of women keeping the “honey-voiced” tradition alive.  They are called “Melifono,” and their name says it all.

Formed just four years ago, the group sings mainly in Kalamata. It was a special treat then when the choir gave an outstanding performance last weekend at the exquisite Mani-Sonnenlink boutique Resort in Pyrgos, West Mani.

The outdoor theatre is in a spectacular setting in a mountain village close to Stoupa and gives the immediate impression of a mini Epidarus, the famous theatre of antiquity.  Guests sit on stone steps in a natural setting of flora, fauna, and graceful trees.  The pink and blue sky serves as the background as the brilliant sun sets.

Concert goers, mainly tourists staying in near-by hotels, were taken to the theatre in a comfortable bus and transported back to their hotels.  Vegetarian mezdes and wine were served before the performance.

That night, eighteen women sang a variety of selections including Greek traditional songs, spirituals and lullabies, folk songs from Russia and Japan, a selection by Mozart and two songs by the American composers Gershwin and Bernstein.  Ivan Matzaris was conductor and enthusiastic piano accompaniment was provided by Lukas Georges

Melifono practices twice a week and gives approximately ten performances a year.  Its founding members are students of the music conservatory.  In 2015 , Kalamata hosted the International Choir Festival Worldwide and Melifono won second place in its category in the competition.  The choir participated in the musical folk tale “Stone Soup” for two performances in Athens in June of 2014 and in the Twentieth Annual Dance Festival in Kalamata in July 2014.

Mani-Sonnenlink is a certified, organic hotel; it is a resort open year-round.  In addition to hosting concerts, it sponsors yoga classes, therapy sessions, and workshops on personal development.  Founded by Burgi and Fritz Bläuel, it promotes well being and healthy living in a unique atmosphere that respects the natural environment.

All photos are by Andreas Vrionis.

Aurelia is a professional travel writer and the author of two novels set in Greece.  “A Lone Red Apple,” unfolds on Mykonos and “Labyrinthine Ways” takes place in the mountain villages of Crete.  She is spending the month of June in Kardamyli at Liakoto Hotel and can be contacted by sending an email is [email protected] 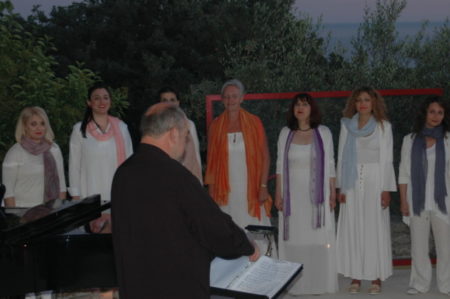 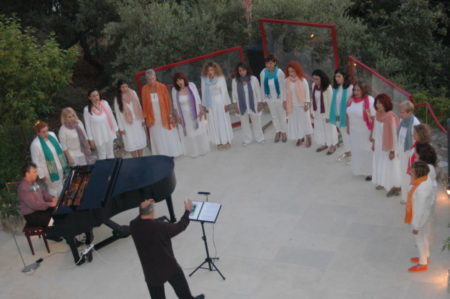 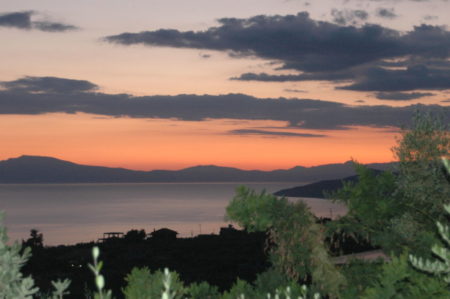