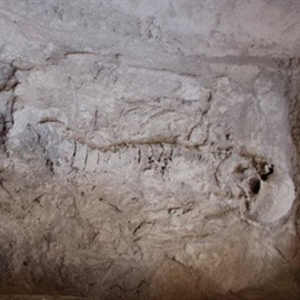 New burial monuments were unearthed and studied during the second period of the ongoing excavation in Nemea, which was completed on 29 July, according to a press release issued by the Greek Ministry of Culture.

The hammocks are graves carved on the rock and consist of three sections: the road, a downhill runway leading from the surface of the ground to the opening, the entrance of the tomb blocked by irregularly placed stones, sealing the underground burial chamber.

The latest excavations brought to light two new chamber tombs, and despite the fact that one of them had been looted, the archaeological team managed to date it to the latter Mycenaean period (1350-1200 BC).

The second tomb, which was discovered under thick layers of sediment dated in the Archaic, later Roman and meso-Byzantine periods, was constructed in the early Mycenaean era.

The systematic excavation in the area is organized under the auspices of the Corinth Antiquities Ephory with the supervision of Dr. Konstantine Kissas with the collaboration of Dr. Kim Shelton head of the Nemea Center for Classical Archaeology of the University of California at Berkeley.

Many tombs at the site contained elite burial goods and furnishings and were devastatingly looted in the 1970s, with this problem continuing ever since with many priceless items ending up in the networks of the international illicit trade in antiquities.

In order to combat the threat of continued looting, the Tombs of Aidonia Preservation, Heritage, and Exploration Synergasia will implement a program to secure the site and educate the local community about the tangible and intangible losses associated with looting.