CommunityNew York Kick off event marks the beginning of the 21st annual...
Community 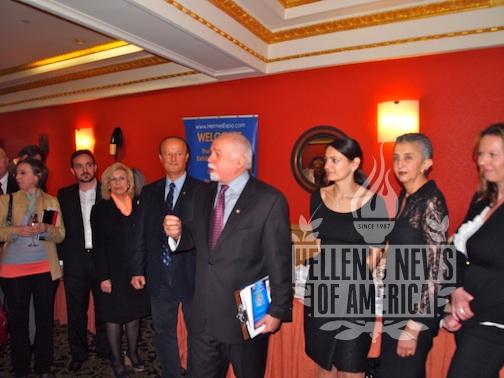 There was a great turn out on Thursday night at Manhattan’s Radisson Hotel. Greek, Greek-American and American businessmen and businesses showed up in order to participate in the “B2B” meetings and enjoy the food and wine tasting, the first event to a series of events this weekend in Atlantic City at the Trump Taj Mahal hotel. The Hermes Expo has been established as one of the main business and network forums.

During the event the participants at Hermes Expo had the chance to present their products and services and give the invitees just a little “taste” of what they are going to experience on Saturday March 31st and April 1st at the Hermes Expo in Atlantic City. Among other businesses that will participate in this year’s Expo: Stellar Imports and its president Sam Katechis, Charalamboglou Wines of Serres, “Olympus” Dairy Products and its representative Tassos Papadakis, Dionisis Douvaras of “Healthy Diet”, representatives of New York’s Kellari Restaurant, Fandis Foods and Tsantali Wines as well as the Law Offices of Marianthe Budike specializing on Immigration issues.

The event was also attended by the General Consul of Cyprus in New York Ms. Koula Sofianou who congratulated Hermes for its business contributions and initiative as well as US Senate candidate George Marangos. Amongst the speakers of the night, many representatives of Marathon Bank, the main sponsor of the event.

All participants thanked Hermes Expo President Mr. Paul Kotrotsios for the event in New York City and are looking forward to the weekend’s festivities in Atlantic City. The Hermes Expo is debuting on Saturday morning, March 31st, with the seminar “Euro zone Crisis: how it affects tourism on both sides of the Atlantic”.