Off the Beaten Trail: April 8th Easter in Moscow Russia 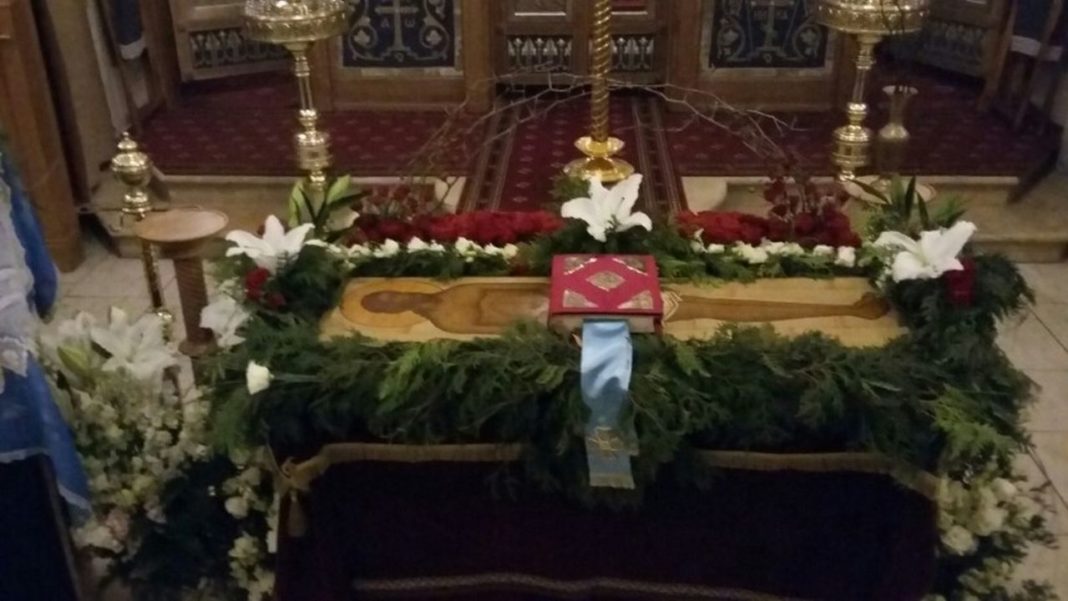 Travel makes new friends. I have a correspondence with my tour Russian guide Irina, a mother of three sons, for over two and a half years. Her conversion to Russian Orthodoxy represents the average Russian turning away from Atheism to their Russian Orthodox roots. I asked Irina to email photos of Easter services.

“The church where I go is named after the Wonder-working and Un-mercenary Saints Kosmas and Damian of Asia in Maroseika Str.,” she said. “I’ve been lucky to visit services these days. On Passions week services are especially touching, gorgeous and very long. Liturgies from Monday to Wednesday (Holy Week) last almost 5 hours. Yesterday, (Holy Friday, April 6th), there were three services and I spent almost all day in the church. Between the services volunteers helped to prepare for the main event – Easter night. This morning, on the Great Saturday after liturgy of Basil the Great (7 – 12 am) all kids, who came with their parents were rewarded for their patience. They could let white doves’ fly (for Annunciation). After that our priests consecrated Easter cakes and colored eggs which people brought in baskets. Now I’m preparing to go for the Easter service tonight (10 pm – 3 am).

Irina explained that “during services in our churches, pictures are not appreciated. Easter service usually lasts from 10 pm to 3 am in regular churches, and in big cathedrals (like Christ the Savior) or in the monasteries it is about one hour longer. The Easter service attracts the biggest number of parishioners. In my little church there were over 400 people this year. To house all of them it was necessary to make more space in the main hall.”

“Usually the choir singers stand along with the parishioners in the main hall, closer to the iconostasis,” she said. “This time the choir was transferred to the top balcony under the dome. From the top young singers (7 women and 7 men) sounded even better as the dome shape allows perfect acoustics. And when at the end of the service the priests started to exclaim ‘Christos Anesti!’ imagine over 400 voices replying with the greatest enthusiasm! The vibration of those voices was a powerful and refreshing wave which gave new energy to people after several hours of standing.

Among hundreds of voices of men and women we could clearly hear a lot of pure and sincere children’s voices. They were touching all hearts.”

Irina noticed “that in my church of Sts.Cosmas and Damianis in Maroseika Str. there are many more children and teenagers, than in other churches where I’ve been. I think it’s because of this superior priest, Father Feodor. He himself is the father of eight children aged from 3 to 22 years old. He is a kind and cheerful person and in charge of our Sunday school. All kids adore him. By the way, this year his birthday coincided with the Easter holiday. He became 50.

The parishioners congratulated him after the service. The service finished at 3 am. Most people remained in the church. Soon the tables were laid down and we were offered tea and traditional Easter cakes, colored eggs and sandwiches with cheese. Kids finished their meals so quickly that I had no chance to take a nice picture of their table. All children received bags with some gifts. At about 4 in the morning people started to leave. Public buses were going all over that night and morning. Ahead is a whole Easter week with a lots of celebrations, charity fairs and concerts, Christos Anesti! Irina — Ирина Четина”

“The general cultural liberalization that followed Stalin’s death in 1953 brought a natural curiosity about the Russian past that especially caught the interest of younger generations,” according to Glenn E. Curtis, in the book Russia: A Country Study. “The ceremonies and art forms of the Russian Orthodox Church, an inseparable part of that past, attracted particular attention, to the dismay of the Khrushchev and Brezhnev regimes. Historian James Billington has pointed out that in that period religious belief was a form of generational rebellion by children against doctrinaire communist parents.”There are no seats in her church. Everyone stands, as in traditional churches in Greece. Women and girls cover their heads with scarfs as the American Christian churches up to the 1960’s. Their iconostasis (altar) has traditional Byzantine icons and symbols.

On April 8, 2018 Easter, President Vladimir Putin said “It is with satisfaction that I note the tireless efforts by the Russian Orthodox Church to strengthen social harmony, support the institution of family and educate the younger generation, as well as its contribution toward overcoming pressing social challenges. The Russian Orthodox Church should be praised for its extensive and multi-faceted work.” 1

“Today the Russian Orthodox Church is, by far, the most conservative, traditional and anti-Communist religious body in the world. It has gone so far as to canonize dozens of martyrs killed by the Communists and celebrate the Romanov tsar and his family who were brutally murdered by the Reds in 1918.Significantly, since 1991 over 26,000 new Christian churches have opened in Russia, and the fact that Christianity is being reborn in Russia has not gone unnoticed among some Christian writers in the America and Europe, although generally ignored by the secular press.”2