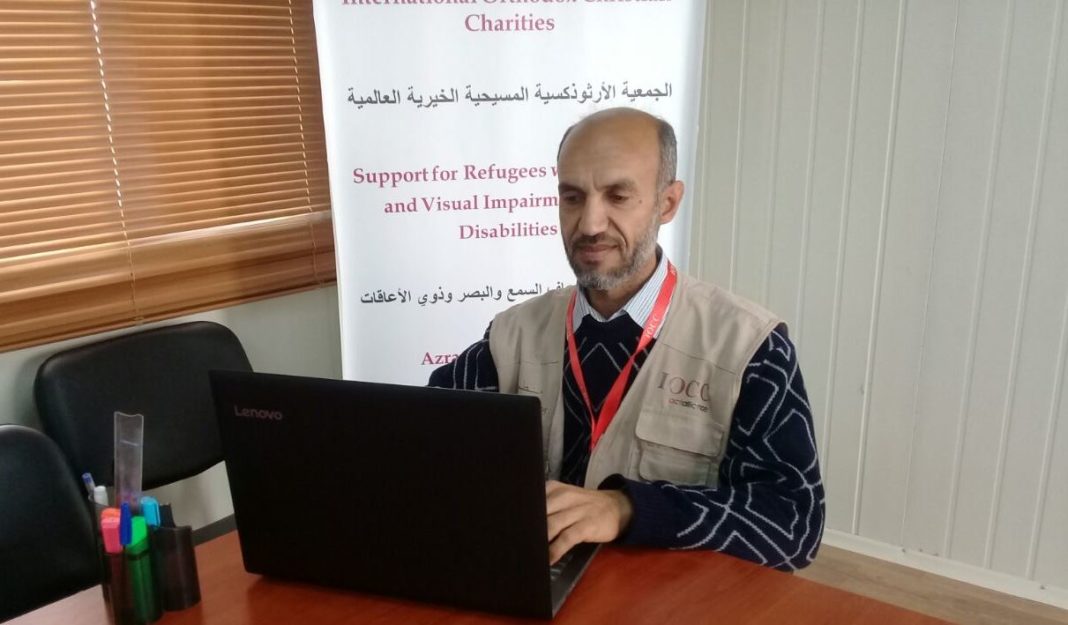 Baltimore, MD (April 10, 2018) – International Orthodox Christian Charities (IOCC), the humanitarian and development agency of the Assembly of Canonical Orthodox Bishops of the United States of America, has passed the eight-month mark in implementing services for people with disabilities in Azraq refugee camp, Jordan, along with healthcare education for other residents of the camp who are training to care for fellow refugees with vision and hearing needs.

IOCC’s office in the Azraq camp opened in July 2017, the organization’s first in an official refugee camp in Jordan. Although most Syrian refugees live in urban centers or rural areas, those arriving at camps often have preexisting conditions that worsen if left untreated. IOCC, working in partnership with the United Nations High Commissioner for Refugees (UNHCR) and the International Medical Corps, as well as the Jordanian Syrian Refugee Affairs Directorate, has established diagnosis and treatment services inside the Azraq camp to help meet the needs of refugees with hearing and visual disabilities. Medical specialists diagnose each case, and IOCC provides the needed devices (i.e., hearing aids or eyeglasses), along with support for their effective use and care.

In addition to these basic services, IOCC’s Azraq project is training 10 refugees in community-based rehabilitation. This internationally recognized approach to supporting persons with disabilities promotes their involvement in their own care and integration into society. The method was initiated by the World Health Organization in 1978. To implement it in the Azraq camp, IOCC has collaborated with Al Hussein Society, a local nongovernmental organization that specializes in serving people with disabilities.

In parallel programming, IOCC has trained 45 additional volunteers in and around Amman, both Syrian refugees and Jordanians, in the fundamental tenets of screening and assessing visual and hearing impairments. These volunteers can now assist others through the project. Apart from performing a valuable service in their community, all the volunteers ultimately obtain a marketable skill and practical experience that may help them rebuild their lives.

Ahmad is a 44-year-old refugee from Syria who now resides in Azraq refugee camp. “I am proud to be one of the IOCC volunteers [here],” he told IOCC’s camp coordinator. Educated in literature, Ahmad had been a teacher in his home country. “I joined the IOCC team to help our brother and sister refugees reduce their suffering,” he said, adding that he appreciates the opportunity to gain professional experience—no small thing given the limited opportunities many refugees face when they leave their homes and careers behind. Ahmad sees the multifaceted value of serving those around him: “I believe that the volunteering work is a message to help others and to spread teamwork within our community.”

“This project is unique because it incorporates layers of service, helping make IOCC’s work more expansive in serving anyone in need,” commented IOCC Executive Director and CEO Constantine M. Triantafilou. “Not only are refugees with medical needs receiving treatment, but others also have an opportunity to help people with disabilities in the camp.” This IOCC project, like many others, aims to address an immediate need while also supporting individuals and communities in long-term improvement.

IOCC, the humanitarian and development agency of the Assembly of Canonical Bishops of the United States of America, was created in 1992 in response to the collapse of the Soviet Union and to support innocent people affected by the conflict in the former Yugoslavia. Today, the organization applies its expertise in humanitarian response to man-made and natural crises in Europe, Africa, the Middle East, and the United States. The organization has, since its founding, distributed aid worth over $625 million in more than 60 countries around the world, and offers assistance based solely on need.