CommunityOn the Road in Greece: June 17, 2018, A Black Day in...
CommunityGreeceCulture 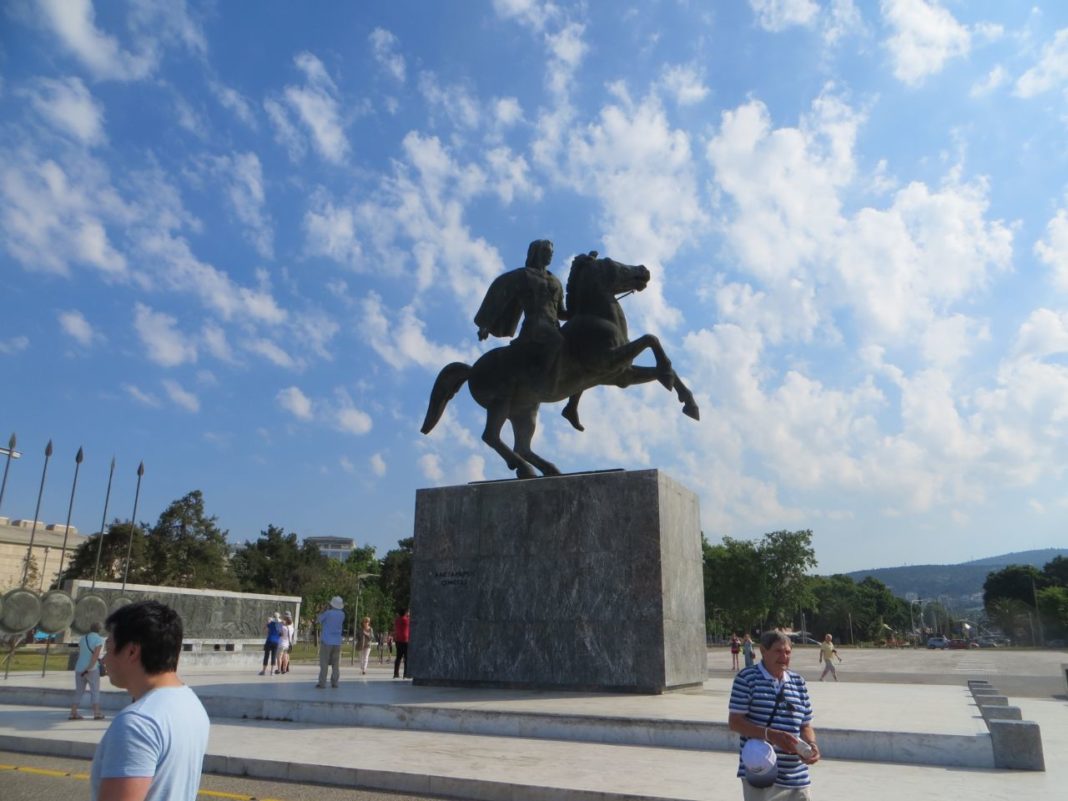 “Those that fail to learn from history, are doomed to repeat it,”  Winston Churchill.

“With a signature, Prime Minister of Greece Alexi Tsipra and the aid of Right-wing Coalition Defense Minister Panos Kammenos betrayed Macedonia,” said Antonis Mylonakis on the Greek Television channel Axion. It was a sunny day in Tripolis, at the heart of the Peloponnese. I had a great day shopping, talking to the average Greek and enjoying Greek cuisine. We turned on Greek television channel Axion on June 12th.   Our day and outlook for Greece were destroyed when we received the news Greece sold their Greek Macedonian heritage to FYROM.

“What’s already been sold off, or put on the chopping block?  Ports and airports; railways; electric, gas, and water companies; seashore areas; archaeological and cultural sites; mines; theaters; and even courthouses.  Foreclosed homes have been put on an electronic auction block, to facilitate private dispossession as well.,” said scholar Robert Zaller, Ph.D.,1

On June 17th, 2018, President Tsipras sold the Legacy of Alexander the Great, Byzantine and Modern Greek heritage of Macedonia to FYROM. Greek television stated, “it was a Black Day.”

President Tsipras and Prime Minister Zaev signed and agreed to give FYROM the Macedonian heritage on June 17th without the consent of the Greek people. The leaders decided. I saw on Greek television journalist/community activist Demetrios Filippidis and others look as if they were at a funeral. Yes! The funeral of Greek Macedonia!

“The chroniko (chronicle) of the great betrayal approved by the Greek congress, gave away Macedonia with a signature. A piece of our history was ignored with the naming of FYROM as North Macedonia. “We owe this betrayal to President Tsipras, Defense Minister Kammenos and Archbishop Ieronymos II of Athens.  All of Greece betrayed, including the will of the Greek people,” said Axion channel commentators.

Ever since the Republic of Macedonia declared its independence in 1991, Greece has been fighting the country over its name. Today the 27-year impasse ended as two nations finally came to a resolution: The former Yugoslav republic is getting a new name, the Republic of North Macedonia.

“There is no way back,” Macedonian Prime Minister Zoran Zaev said in a press conference, Reuters reports after he spoke with his Greek counterpart Alexis Tsipras. “Our bid in the compromise is a defined and precise name, the name that is honorable and geographically precise — the Republic of Northern Macedonia.”2

The commentators on the June 12th program said, “Zaev and Tsipras are good friends.”  A Greek government 26 years ago under then-Premier Constantine Mitsotakis agreed to let its new northern neighbor, which broke away from Yugoslavia to take the name FYROM until a permanent name could be agreed but all talks have failed to agree on a new name.

Since then, Greece has vetoed any hopes that FYROM had of entering NATO or getting into the European Union but with both institutions meetings this year in critical sessions, the United States – Nimetz is an American lawyer – has been pressing for a solution to get a new member into the defense alliance as a bulwark against Russian interests in the Balkans.”3

During my 16 days in Greece, every Greek I questioned was against the government’s decision. A friend in Tripolis said “Macedonia has over a million Greeks. They should form a new political party, becoming a major force in the government.”

“ Managing the country’s debt, which is equal to nearly 180 percent of its gross domestic product, remains a herculean task. Severe belt-tightening will still be necessary if Greece is to have any hope of regaining credibility with international investors. The country is still years away from being able to sell new debt on financial markets; it still owes staggering sums to banks, financial institutions and other countries, which will be looking over Athens’s shoulder for years to come.4

Many Greeks are also unhappy about the deal, calling it a national capitulation and betrayal….  An opinion poll published by Proto Thema newspaper suggested that seven out of ten Greeks objected to the compromise reached with Macedonia.  Many Greeks reject any alternative name that includes the word Macedonia.

The agreement has also prompted protests and political opposition in Skopje, the Macedonian capital. President Gjorge Ivanov has said he will oppose the agreement, and on Friday, a meeting among Mr. Ivanov, Mr. Zaev and Macedonia’s foreign minister, Nikola Dimitrov, ended almost immediately after it started.5

We are middle class, retired professionals, members of two Greek Educator organizations, who believe in patriotism, language, family tradition and church (its all we have). North Macedonia (FYROM) could have joined NATO without Greece selling off their cultural heritage. The future? The people of Greece and their Diaspora organizations have a fear that will become actualized as the Greek legacy vanishes in the former areas of the Byzantine Empire.