ONASSIS CULTURAL CENTER NY INVITES VISITORS TO WALK IN THE FOOTSTEPS OF...
Featured

ONASSIS CULTURAL CENTER NY INVITES VISITORS TO WALK IN THE FOOTSTEPS OF THE GODS ON MOUNT OLYMPUS, AS IT PRESENTS A SPRING SEASON ON THE THEME OF GODS AND MORTALS, MARCH 24 – JUNE 18 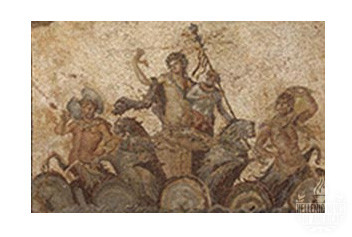 ONASSIS CULTURAL CENTER NY INVITES VISITORS TO
WALK IN THE FOOTSTEPS OF THE GODS ON MOUNT OLYMPUS,
AS IT PRESENTS A SPRING SEASON
ON THE THEME OF GODS AND MORTALS, MARCH 24 – JUNE 18

NEW YORK, NY, February 10, 2016 – Presenting its first full spring season since renovating its gallery in the heart of Midtown Manhattan, the Onassis Cultural Center NY will offer the public a major exhibition of ancient art, installations of contemporary art, and a variety of events and resources on site and online for people of all ages, during three months dedicated to the theme ofGods and Mortals. Mount Olympus, the peak known to the ancient world as the home of the Greek gods, will provide the real and symbolic locus for the wide-ranging program.
From March 24 through June 18, visitors to the Onassis Cultural Center NY will be able to
explore the sights and sounds of the landscape on Mount Olympus

All exhibitions and events at the Onassis Cultural Center NY, 645 Fifth Avenue, are open to the public free of charge.

Anthony S. Papadimitriou, President of the Onassis Foundation, said, “This major exhibition marks the reopening of the gallery spaces at the Onassis Cultural Center NY after three years of renovation. We are eager to welcome American and international visitors to our new space and ready to host a new series of art exhibitions. Following in the established tradition of the Onassis Cultural Center NY, our exhibition and other academic and cultural activities will continue to explore and present the Hellenic heritage to a wider audience.”

Commenting on the exhibition, Dimitrios Pandermalis said, “During the past forty-five years of work at the site of the city of Dion, not only have we been able to locate ancient buildings and portable finds but also to chart the lives of many individuals throughout the centuries. The exhibition Gods and Mortals at Olympus: Ancient Dion, City of Zeus aims to provide visitors with a sense of Dion through the presentation of some of the most significant finds, as well as to introduce the wonder of the natural environment that inspired the ancients to develop a sacred center on the foothills of Olympus.”

Amalia Cosmetatou, Executive Director of the Onassis Foundation (USA) and its Director of Cultural Affairs, said, “This spring we present a major exhibition of ancient art and public programs that draw inspiration from Greek mythology and bring the conversation to the present. We enter into a dialogue about ancient and contemporary art and ideas inspired by life in the ancient city of Dion and the natural environment of Mount Olympus, reflecting on the divine and the human condition, the eternal and the ephemeral. Offering programs for all ages, we provide a forum for creative, original thought about our Classical heritage and its relevance today.”

On view from March through June 18, 2016, Gods and Mortals at Olympus: Ancient Dion, City of Zeus explores the relationship between daily life in an ancient city built on the slopes of Mount Olympus and the mythological abode of the gods at the peak. Within an immersive setting, the exhibition features more than ninety artworks and artifacts-including mosaics, sculptures, jewelry, ceramics, coins, glass, and implements-dating from the tenth century BCE to the fourth century CE. None of these objects have been seen before in the United States. Among the highlights are marble sculptures from Hellenistic and Roman times of deities including Zeus, Demeter and Aphrodite, decorative objects and implements dating back as far as 1,000 BCE and a visually stunning group of mosaic panels from the private Villa of Dionysus, newly restored with the support of the Onassis Foundation.

The Onassis Foundation (USA) is publishing a 160-page, softcover catalogue that includes illustrated entries for all objects in Gods and Mortals at Olympus: Ancient Dion, City of Zeus and essays by Dimitrios Pandermalis on the history of ancient Dion and its excavations; Maria Katsakiori on Mount Olympus and its natural environment; Fritz Graf on Zeus Olympios and his cult in Greece; Richard P. Martin on divine family in the human landscape of Dion; Semeli Pingiatoglou on the cult of Demeter at Dion; Angelos Chaniotis on everyday life in Roman Dion; and Sophia Kremydi on the use of coinage in ancient Northern Greece.

Throughout the spring season, the Onassis Cultural Center NY will also present two new sound installations specially commissioned from artist Kostas Ioannidis. Within the foyer of the gallery, the work In memory of, memory of, memory of reflectson how we putlayers of meaning onto the past, using texts about the love of the nymph Echo for Narcissus by poets from Ovid to Yeats as translated into the extraordinary, centuries-old “language of the mountains”-a repertoire of whistles, still in use by mountain people, with a fully developed vocabulary. In the exhibition itself,O rocky voice, shall we in that great night rejoice? will frame the artifacts of the Dion exhibition with the natural soundscape of the mountain, while simulating a voyage through time and space that is inspired in part by W.B. Yeats’s poem “The Man and the Echo.”

Throughout the spring season, the Onassis Cultural Center NY will offer Let’s Walk: A Peripatetic Conversation Series with Simon Critchley. Visitors will be able to join philosopher and novelist Simon Critchley, the Hans Jonas Professor at the New School for Social Research, and his guest of the day, as they stroll through the gallery of Gods and Mortals at Olympus and converse about the questions the exhibition raises for us today. The Let’s Walk tour schedule will be available at www.onassisusa.org. Reservations required.

Scholars of archeology and the ancient world will offer free guided public tours of Gods and Mortals at Olympus at 1:00 pm each Monday, Wednesday, and Friday. No reservations are required for the public tours. Tours for school groups will also be offered by advance reservation.

Twice a month-on April 1 and 15, May 6 and 20, and June 3 and 17-the Onassis Cultural Center NY will offer special public tours of Gods and Mortals at Olympus at 6:00 and 7:00 pm, given by the renegade guides of Museum Hack. Well-researched and fact-based but also highly interactive and irreverent, Museum Hack tours unfold in response to the character and interests of each small group.  For reservations, please visit www.onassisusa.org.

For children ages 6 to 10 and their families, the Onassis Cultural Center NY will offer family programs that are an interactive introduction to the gods and mortals of Mount Olympus and ancient Dion and the archeologists who are exploring the site today. Each 75-minute program is given by master storytellers and educators. Family programs will be offered on one Sunday each month (April 17, May 15, and June 5) at 11:00 am, 12:30 pm, and 2:00 pm.  Children must be accompanied by an adult.

In conjunction with the exhibition Gods and Mortals at Olympus, the Onassis Cultural Center NY has commissioned the software studio Culturplay to create the video game Secrets of the Past-Excavating the City of Zeus. The game invites the player to take on the role of Director of Excavations at Dion, deciding where and how to search the ancient site, using tools to unearth treasures, examine the finds in a lab, and present the artifacts in an exhibition. Visitors to the Onassis Cultural Center NY will be able to play Secrets of the Past-Excavating the City of Zeus on iPads, and the game will also be made available for free download through a link to the Apple App Store. Ages: 10-12.

Visitors to the Onassis Cultural Center NY’s website will find an Olympus Now page that includes views of today’s Mount Olympus and the people who live on its foothills, a history of expeditions to the peak, a video interview with Professor Dimitrios Pandermalis, a documentary about the restoration of the Villa of Dionysus mosaics, a social media wall, and more.

The exhibition Gods and Mortals at Olympus: Ancient Dion, City of Zeus is organized by the Onassis Foundation (USA) and the Dion Excavations, in collaboration with the Hellenic Ministry of Culture and Sports-Ephorate of Antiquities of Pieria.

About the Onassis Cultural Center NY
Founded in 2000, the Onassis Cultural Center NY explores Greek culture, from antiquity to today, through a rich and diverse program of exhibitions, events and online engagement. Located in midtown Manhattan, in Olympic Tower, the newly renovated creative space offers experiences that inspire and support the interaction between audiences and artists and thinkers in all cultural fields from visual arts, dance, film, literature, music and theater to the humanities.  Programs and exhibitions-from scholarly initiatives to offerings designed for families and novices-are presented free of charge to make the experience accessible to all.

The Onassis Cultural Center NY is open 10 am to 6 pm Monday through Saturday, with extended hours on Thursdays until 9 am. The gallery will also be open for Family Sundays on April 17, May 15, and June 5. Admission is free at all times.

About the Onassis Foundation (USA)

To learn more about the Foundation and the Onassis Cultural Center NY, please visitwww.onassisusa.org.