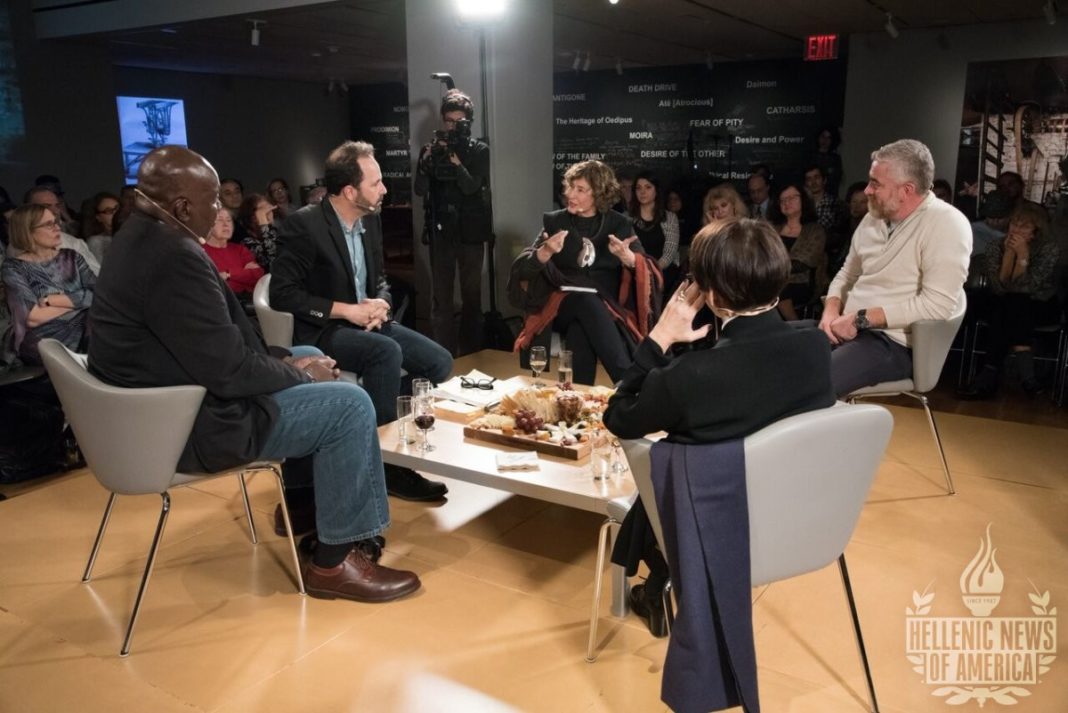 With brilliance and humor, five outstanding artists presented their views on the role of the artist in society at New York’s Onassis Center’s recent Symposium. Fearlessly, they took on a huge topic and brought it home for an audience alternately intrigued, confused, riveted and ultimately thrilled to come away with new knowledge of the artist’s “why”. In the wake of a pivotal and hopefully transformative presidential election, author Philip Gourevitch, the moderator, a writer for the New Yorker, summed up the role of the artist now. “The answer to the artist’s place is ‘Yes’. The artist is inextricable from society. He responds to the worlds thrown at him. As people suffer political and societal confusion and stress, they will turn to the people who explore it. Our artists.”

Like theatre in the round, the group including chef/activist Alex Atala, the only chef to be named one of Time Magazine’s Most Influential People in the World in 2014; Azar Nafisi, author of the international best-seller, Reading Lolita in Tehran: A Memoir in Books; Eli Reed, renowned American photographer and photojournalist; and Nancy Spector, Chief Curator and Deputy Director at the Brooklyn Museum, known for her radically innovative exhibits, sat around a table filled with an assortment of cheese, fruit and nuts – simulating the symposiums of ancient Greece. They sipped glasses of water rather than wine as they offered the audience some insightful and original intellectual tidbits to chew on.

Claiming that he’s not really an artist but merely the “first man in the food chain,” Atala, chef of D.O.M. restaurant in Sao Paulo, considered one of the best restaurants in the world, pointed out that “Food helps us to understand ourselves, and maybe much more. Today we sample wines from all over the world. We try to understand geology and history by drinking those wines. We open our palates and our minds.” Known internationally as an environmental activist, Atala uses indigenous produce from the Amazon to craft a cuisine steeped in classical techniques that are uniquely Brazilian – including putting ants on the menu!

“We waste too much,” said Atala, who believes in using all parts of a slaughtered animal out of respect. “Artists try to remain indifferent to the pressures of society, but the world always returns to them,” the chef pointed out.

“Take a journey with me. We spend 15 days in Nepal eating nothing but vegetables and cleansing our bodies and souls. Then we return, smell barbecue, and are ravenous. We want it. But it’s not barbecue. It’s a cultural phenomenon, a dead man being burned.”

A recurrent theme of the discussion was the artist’s willingness to confront an uncomfortable situation, to explore it rather than turn away in fear or disgust. Photojournalist Reed, author of several book including Black in America, a former Neiman Fellow at Harvard University, and currently a professor of photojournalism at the University of Texas in Austin, talked about the immediacy of the artist’s experience. “I’m a shy person, but you have to step in. To get beyond the surface, that’s when things get interesting. That’s when you tell stories. You go to a place. You travel. You get there. You have to do it. You have to tell the story. If you see something amazing, and say I’ll catch it on the way back, that means it isn’t going to happen. It’s like the train left the station and you missed it. You need the courage to just go for it.”

Author Nafisi spurns literary clichés. Admitting that she watches TV’s The Simpsons as well as Law and Order, this charming women of eclectic tastes talked about the transformative power of fiction in the world of tyranny. “When you are deprived of your rights in reality, it is almost instinctive that people turn towards literature and the arts. That’s the thing about books – you transcend everything including class and politics. I remember James Baldwin talking about how he felt so lonely and then he read a guy named Dostoyevsky and realized that another artist is thinking the same thoughts.” She told an extraordinarily moving story of a young student executed, but during her last days taking comfort by discussing F. Scott Fitzgerald and Henry James with another prisoner.

Curator Spector pointed out the variety of art and its extraordinary possibilities to change our perception. While curator of the Guggenheim, a German artist came to her. “We staged an art of conversation in the museum, with nothing but talk and connection, complete with interpreters. It came from a deep conviction about sustainability, that perhaps the world did not need any more objects. It was very, very moving and relied on the oral tradition and the notion of not using up the world’s resources. Human energy alone is a work of art.”

Moderator Gourevich recalled visiting Greece’s Ephesus at the climax of the Junta and military dictatorship and attending a performance of Prometheus Bound. “Suddenly there were flashing blue lights, and the audience was pushed back to accommodate the Junta entourage that came into the theatre. At the end of the play – which inspired people to cry out for freedom – the officials congratulated the actors. The play was in Greek and it was alive 2000 years after it was written. It was an incredibly strong moment.”

Nafisi said: “Great art has no message and that’s the power of it. The artist is a witness. The power of art is the fact that it reveals the truth. It goes beyond the illusions, and at the same time shows the ordinariness of the ordinary, because through the eye of the artist, nothing is ordinary. Everything is unique. And these qualities make it pleasurable and highly dangerous and disturbing. Because once you know the truth, you have to take action. You can’t remain silent. Art is not like aspirin. It doesn’t console you. It doesn’t tell you how to be nice to your mom – but what it does – it makes you resist the absoluteness of the cruelty of man. The story is your story even it is full of blood and there is the joy of discovery. Even when you go to the Holocaust Museum it is that joy of discovering something and being the wiser for it and we need it, right now, in these times.”