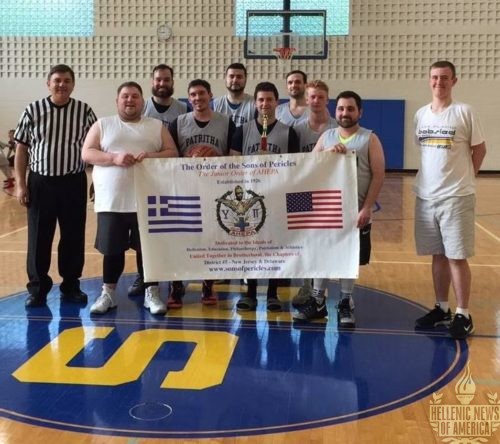 The Patritha Chapter #317 of Wyckoff, NJ completed a perfect sweep to win their second straight Jersey basketball tournament championship. In a repeat of last year’s final, Wyckoff matched up against the Karpathos team of Jersey City. Wyckoff relied on the scoring duo of Kirk Likakis (28) and C.J. Tahinos (14) to out-score their opponents 55-37. In addition, Wyckoff’s strong interior defense swatted away several attempts by Karpathos to mount a comeback, despite Levanes Bertos’ 14 points for Karpathos.  Patritha led right from the start to claim their championship.

The tournament was played on Saturday, May 20th at the St Nicholas gymnasium in Wyckoff. The competition included four teams from throughout Ahepa’s 5th district. Other teams included a nearby Clifton Sons team and the Sons of Pericles Alumni team. Clifton ended their 3-year losing streak by beating the Alumni in two games to claim 3rd place.   Karpathos only loss, in the preliminary round, was to Wyckoff to take second place. Wyckoff, won all four games in the tournament.

Kirk Likakis excelled throughout the tournament to be named the Most Valuable player of the tournament. Kirk played his best game in the finals to lead the Patritha team to victory. Other outstanding performances in the tournament were by Christo Apostolou or Wyckoff, a former MVP winner, who netted a game high of 14 points in the preliminary round and Manny Damplias who led Karpathos against Clifton by scoring 24 points.

The tournament is held annually since 2006 and is hosted by the Patritha Chapter of Wyckoff, NJ.  The Sons of Pericles is the Junior Order of AHEPA and is open to young men from the ages of 14 – 27. For more information about the Sons of Pericles visit www.sonsofpericles.org.

Previous articleLOUKOUMI MAKE A DIFFERENCE FOUNDATION TO HOST 2017 DANCE PARTY
Next articleOn the Road in Greece: Vlychada Cave of Diros