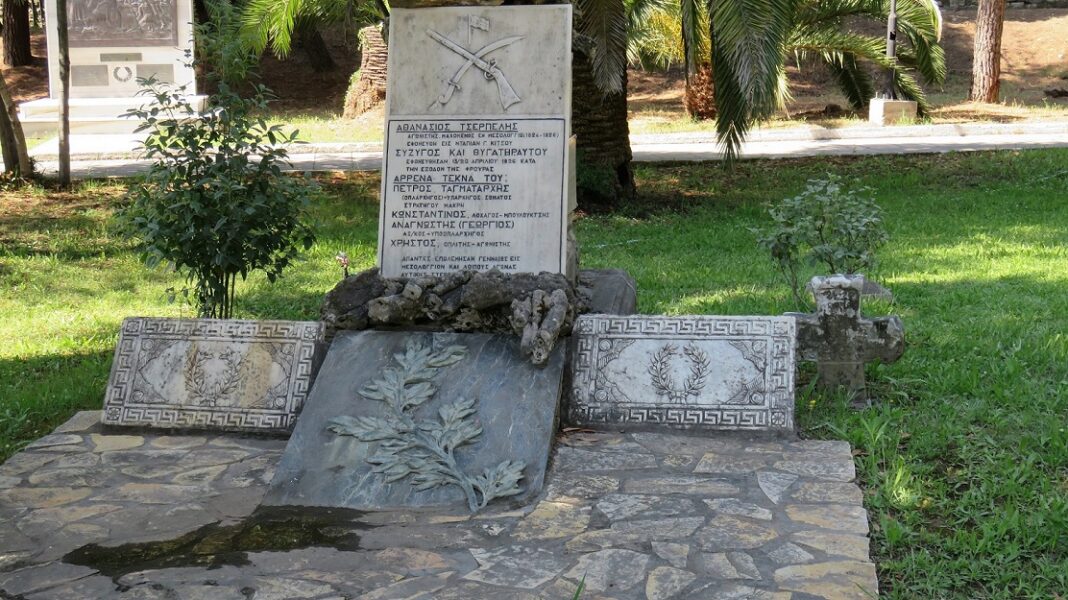 Lord Gordon Byron died during the second siege of Missolonghi. The Ottomans with allies came back a 3rd time. The fighters knew all was lost unless they make a daring escape. The “Exodus of Missolonghi” was a mass breakout of the 10,500 population from an Ottoman and Egyptian siege.
However, the plan was not carried out properly or there was a traitor who betrayed the scheme to the Ottomans. Ibrahim’s forces slaughtered the Greek freedom fighters who fought against all odds. Meanwhile, the enemy forces had invaded the city and killed everyone who was left behind.1
“The Exodus of Missolonghi” by Theodoros Vrysakis, an orphan of the 1821 Revolution when his father was hanged by the Turks, is a masterpiece. The Greeks believed their rightful cause enjoyed Christ’s blessing.2
“Sometimes even to live is an act of courage,” – Seneca3. It is estimated that 3,000 Greek men were killed during the Exodus of Missolonghi. The 6,000 women and children of the city were taken as slaves, sold to the slave markets of Constantinople and Alexandria. The Ottoman-Egyptian casualties amounted to 5,000 men.4 How many of our ancestors were put on the auction block in Alexandria because they defied their Ottoman masters? That is why the “Cliffs of Freedom” movie is important, showing death is preferable to a life of slavery.5
I had an insight into Ottoman slavery by going to Armenia and Artsakh with Rev.Fr.Dr. Father Abraham Malkhasyan and the Holy Martyrs Armenian Apostolic Church of Bayside before the 2020 Covid-19 Pandemic. We visited the Armenian Genocide Memorial complex at Tsitsenakaberd. This is Armenia’s official memorial dedicated to the Armenian genocide. Portraits of women with tattoos on face and bodies were shown. They were slaves, with every master’s tattoo on them.6 The real victors of the “Exodus of Missolonghi” were the women and children who survived and persevered in the hands of their Ottoman masters.
The Ottoman victory showed the barbarism of Turkish troops, A new wave of Philhellenism generated in Europe. The Garden of Heroes national cemetery at Missolonghi has a history not found in English internet sources. One must go to google/gr to get a complete insight and visit in person. At the entrance is a statue dedicated to the National Poet of Greece, Dionisios Solomos with quotes such as “The Eyes of the soul must always be awake.”
There are 69 Greeks and Philhellenes of historical and artistic importance. The Tomb of the Fallen with a lion was established by the Greek monarchy of Othon and Amalia. Marcos Botsaris tomb with the statue of the Hellinopoula (Greek girl) is visited by many.  Marcos Botsaris was a heroic Greek Revolutionary hero from Souli, Epirus who died fighting in battle. He is a national figure revered in poetry, literature, and music. visited by many.
Athanasios Cherpelis was memorialized with his fellow fighters. “My great, great grandfather was Athanasios Cherpelis,” said Dikaiophylax Archon Stephen Cherpelis, of St. Nicholas Greek Orthodox Church in Flushing. “He was a Captain killed in the Exodus from Missolonghi. His brother Anagnostis survived. The Bishop of Missolonghi gave my ancestor Cherpelis the name of Anagnostis, meaning reader, because he read the epistles every week in church. Anagnostis escaped to the village of Alestia.
I was amazed to learn from a monument that American fighters died at Missolonghi fighting for the freedom of the Greeks from the slavery of the Ottoman Turkish Empire, which became brutal from 1the 1800s to 1912. The fallen heroes of Thrace had a monument. A memorial with a poem of Kostis Palamas, praises the fallen German heroes of Missolonghi for “their loyal hearts and sacrifice.”. An amazing monument carving of Greek fighters bowing and listening to the inspiring words of a priest holding a bible and pointing to God, caught my attention7. Missolonghi remains in 2021 as a symbol of Greek heroism, and a willingness to risk one’s life for freedom.
References:
1.               https://greekreporter.com/2021/04/10/april-10-greece-honor-heroic-exodus-missolonghi/
2.               https://www.nationalgallery.gr/en/painting-permanent-exhibition/painting/the-years-of-othon%E2%80%99s-reign/history-painting/the-exodus-from-missolonghi.html
3.               https://www.reddit.com/r/Stoicism/comments/e7tgp9/sometimes_even_to_live_is_an_act_of_courage/
4.               Greekreporter.com
5.               https://www.imdb.com/title/tt2275629/- “Cliffs of Freedom” movie.
6.               https://en.wikipedia.org/wiki/Tsitsernakaberd
7.On the Road in Greece: The Garden of Heroes, Missolonghi – Greek American Experience (wordpress.com)
8.https://www.nationalgallery.gr/en/painting-permanent-exhibition/painting/the-years-of-othon%E2%80%99s-reign/history-painting/the-exodus-from-missolonghi.html#:~:text=Vryzakis%20Theodoros%20(1814%20or%201819,was%20hanged%20by%20the%20Turks.
Share
Facebook
Twitter
Pinterest
WhatsApp
Linkedin
Email
Viber