Have the Greeks of Athens forgotten their Western Anatolian roots? Don’t bet on it! Their cultural heritage is alive in the national sport of Soccer. I met with Pitsa Tsakonas, a legendary retired librarian of Benaki Museum, the past summer in Greece. “We keep our roots alive in the Mikrasiatikos Academy” she said. “The Athletic Soccer Academy of Kaisarianis Mikrasiatikos (Asia Minor) was organized in 1946. It operates till the present time.”

The soccer team decided to have their t-shirts this year with the photo of the Catastrophe of Smyrna.  It is almost 100 years since their ancestors were expelled from Asia Minor. The pain and longing for ancestral homes remains. This is a tragedy that will endure as long as the nation has the Greek language, culture and Greek Orthodox religion.

The historic Mikrasiatikos Kaisarianis soccer teams were reborn with new Academy leadership.  They participate in the A first soccer category of Athens.  The Academy has a new philosophy. Members are now holding onto a broader historical presence than Kaisarianis.  They represent the entire history of Asia Minor, refugees in order to honor the memory of those who lost their lives and the uprooted who were torn from their beloved homelands. The academy teams do not have numbers. They have team names of cities from Asia Minor. They include: Attalia, Kaisaria, Aivali, Trapezounta, Pergamon, Philadelphia, Vourla, Smyrni, Amaseia, Halkidona, Ephesus, Brousa, Makri, Nicomedia and others.  The teams are the finest in Athens. 2 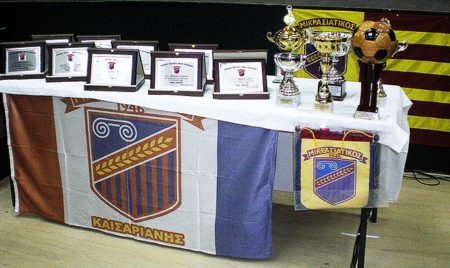 “We have over 350 children,” said General Manager Vagelis Zagorakis. “We are building athletic ability and character in our youth. Volunteers are helping in our non-profit organization.  We ask for the support of all phil-athletes of Asia Minor descent. The ages of the children are from five year old up to adult age.3 From 2015, the Academy is enrolled in the “Athletes Academies OPAP”, where awards were given to its coaches. The men’s team is in the 1st Athens category (EPSA). This year they reached the 3rd place in scoring our goal to produce the finest athletes and citizens who will add to the quality of community life.4

Kaisarianis is located southeast of Athens, near the Hymettus Mountain where the 11th century Kaisariani Monastery is situated. The town was founded in 1922 as a refugee camp for refugees driven from Asia Minor, most of whom coming from Smyrna. Formerly part of the city of Athens, Kaisarianis was created as a municipality in 1933.[3] The name was derived from Kaisareia, the historical capital city of Cappadocia, Asia Minor (now Kayseri, Turkey). The Kaisariani rifle range is notable as the site of the execution of 200 communists on 1 May 1944 by the Nazi occupiers as a revenge for the death of German General Franz Krech, who had been killed in a guerrilla ambush near Molaoi a few days before.5