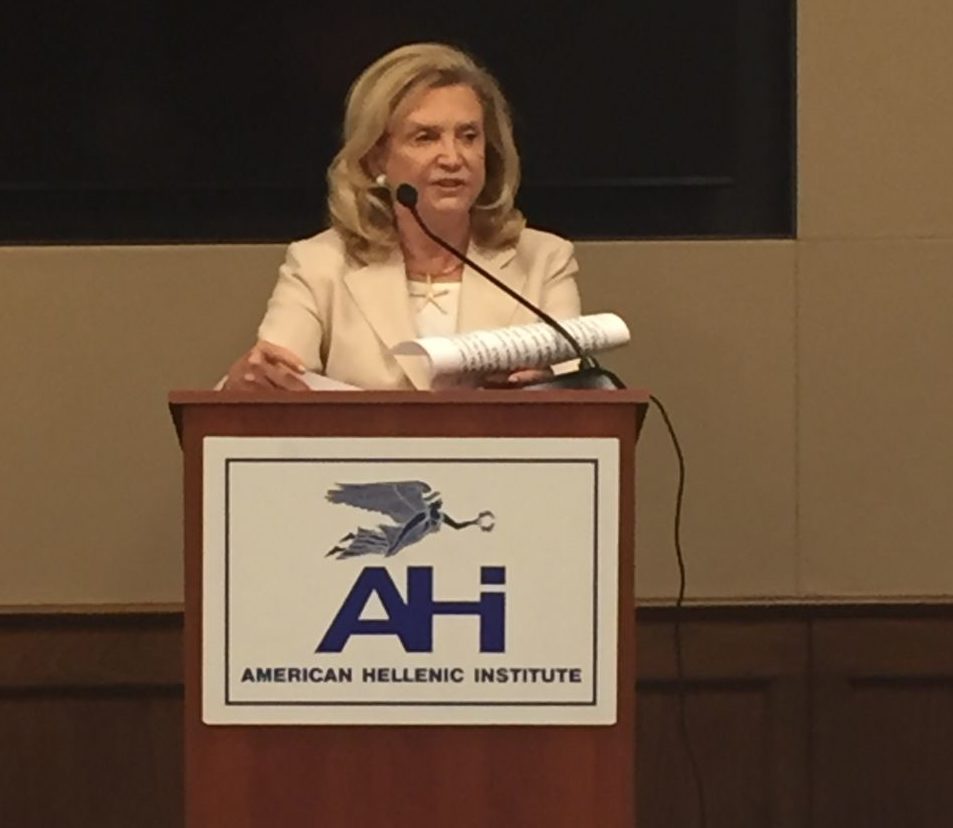 WASHINGTON, DC—Congresswoman Carolyn B. Maloney, co-founder and co-chair of the Congressional Hellenic Caucus, addressed the American Hellenic Institute’s annual Breakfast Briefing commemorating the 43rd anniversary of the illegal Turkish invasion of Cyprus. After the breakfast, the Congresswoman released the following statement:

“As the co-founder and co-chair of the Congressional Hellenic Caucus, I was honored to join Ambassador Andreas Mavroyiannis, Chief Greek-Cypriot negotiator, at this morning’s breakfast briefing hosted by the American Hellenic Institute. For 43 long years, Cypriots have lived with the consequences of Turkey’s illegal and despicable occupation.

“While I was disappointed earlier this month when the UN-sponsored conference ended without resolution, I remain hopeful that Cypriot leaders will keep talking, even though there are important issues of contention. Cyprus needs to be reunified and Turkish troops must be removed. That is a message that members of Congress must continue to communicate in any forum available to us.

“We must also be vigilant in calling out all Turkish aggression, including its provocative invasions of Cyprus’s Exclusive Economic Zone and Greek airspace and continue to demand that the Turkish Presidential guards who beat peaceful protesters in our nation’s capital are held accountable. Immediately after that outrageous assault, I led a letter of 28 members of Congress to Secretary of State Tillerson calling on him to use all tools available to make sure that these thugs are held accountable.

“More recently, Rep. Gus Bilirakis and I sent another letter to Secretary Tillerson to block the sale of small arms to the Turkish security forces responsible for the attacks in D.C. We cannot let this behavior go unchallenged but, so far I’m disappointed with the efforts by our government on this matter. We can and should be doing more.

“The people of Cyprus deserve a unified country, and the U.S. must remain firm in its commitment to that outcome. Rest assured that the Hellenic Caucus stands firm in its mission to ensure that maintaining our critical relationships with Greece and Cyprus are always a top U.S. foreign policy priority.”