DelGuidice opened with the infectious “Miami 2017 (Seen the Lights Go Out on Broadway).” “Mulcahy’s. How are you? It’s great to be back,” DelGuidice said. It was followed by “Movin’ Out (Anthony’s Song),” and he picked up the pace with “My Life,” as yellow and green lights dimmed from the stage.

“All right. Anybody looking forward to the presidential debate?” he asked, prior to breaking into “Say Goodbye To Hollywood,” where vibrant blue lights shined from the stage. He continued with “Vienna” and he subsequently had a toast with his Mulcahy’s audience. “Let’s get a little drink up,” he said, referring to the positive things in the sports world, while sharing that he is a fan of the New York Mets.

“Scenes from an Italia 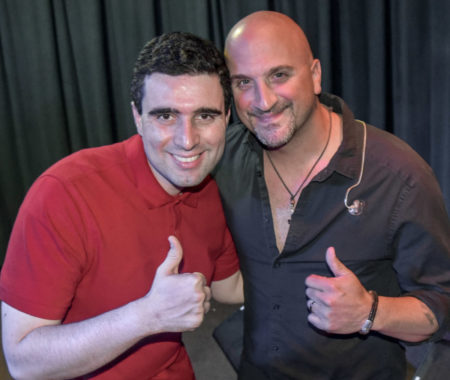 n Restaurant” had a neat echo effect to it, featuring DelGuidice’s exquisite piano playing and captivating vocals. He went on to introduce John Scarpulla for his saxophone prowess, and he had the crowd singing along with him on the classic “New York State of Mind,” where he tipped his hat to his fellow New Yorkers.

He picked up the pace yet again with the upbeat “Keeping the Faith,” which was incorporated as a sing-along, and he took the Billy Joel fans from the 80’s back to “Allentown.” DelGuidice gave a shout-out to Kenny Cino on lead guitar. DelGuidice showed us his love for classic rock by covering Led Zeppelin’s “Whole Lotta Love,” with white laser lights gracing the stage.

DelGuidice delivered an inspirational version of Journey’s “Don’t Stop Believin'” and after “Goodnight Saigon,” everybody got in their patriotic spirit, thus chanting “U.S.A., U.S.A., U.S.A.” His solo performance of “She’s Always a Woman” was mellow, as if he were singing a tender lullaby.

Equally outstanding was his solo piano-driven rendition of “The Downeaster Alexa,” where he accompanied himself on piano, and showcased his incredible three-octave range on key. It was followed by the beloved Elton John hit “Tiny Dancer.”

“Mulcahy’s. Thank you,” he said, prior to giving a shout-out to a birthday in the house. He had everybody clapping along to “We Didn’t Start The Fire,” which featured a killer drum solo from Chuck Burgi, and a neat guitar solo from Kenny Cino.

After “It’s Still Rock and Roll to Me” and “I Go to Extremes,” he closed with “Only the Good Die Young” and “Piano Man,” where Steven Fileti played harmonica.

It was a pleasant evening with Mike DelGuidice and Big Shot at Mulcahy’s Pub and Concert Hall. After seeing the tribute band perform countless times in the Long Island area, this may have been Big Shot’s best live show yet. It felt like a true “Billy Joel Greatest Hits” concert, where all the songs were stellar and heartfelt, including DelGuidice’s classic rock covers. The connection he has with his fans and audience is magnificent, and he always manages to give it his all. DelGuidice and his band earned five out of five stars.