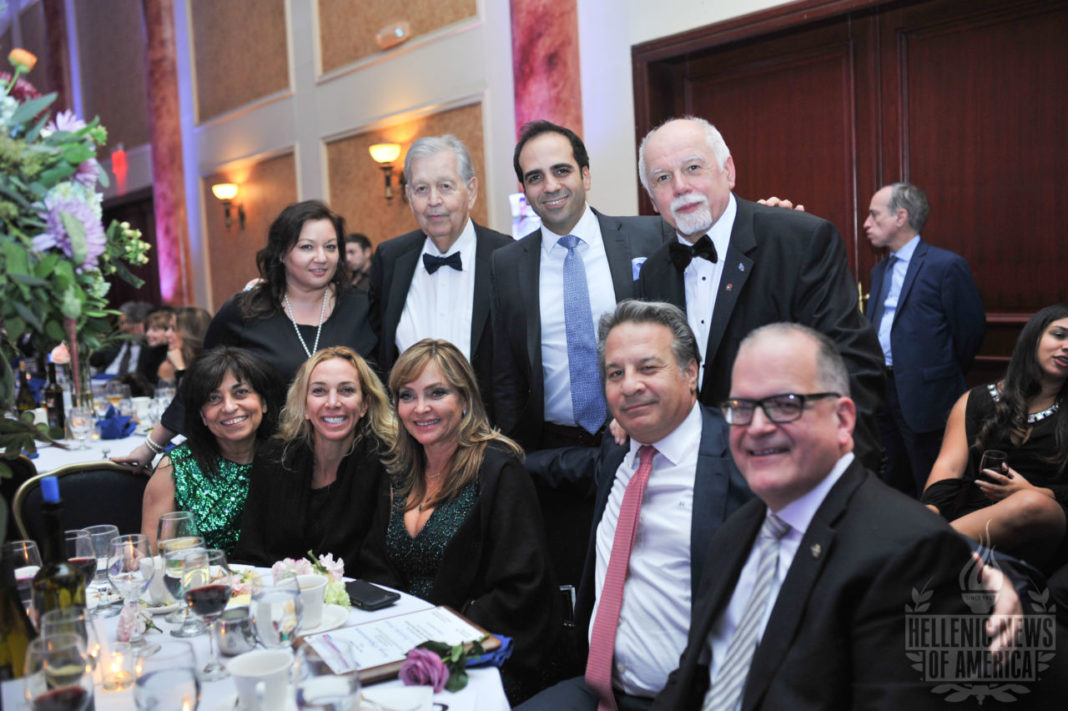 By: Markos Papadatos, Senior Editor
Cinnaminson – On November 12, the Hellenic News of America (HNA) GALA took place at The Merion in Cinnaminson, New Jersey, as part of the 30th anniversary of the distinguished Greek-American publication.
The Hellenic News of America is a bilingual (Greek and English) print and online outlet that was founded by publisher, Mr. Paul Kotrotsios, MBA. It has been connecting and engaging Greek-Americans and Phil-Hellenes since 1987.
Ms. Aphrodite Kotrotsios, the co-publisher of the Hellenic News of America made the welcoming remarks. She briefly spoke about the digital transformation of the newspaper industry. “When the paper first came out in 1987, everything was on typewriters, and it would be a 12 page publication in black and white. Today, the Hellenic News is a a 64 page publication in color,” she said. “We are very lucky. We have it very easy today, with modern computer technology.”
Dr. Spiro Spireas, the Chairman and CEO of Sigmapharm Laboratories, made the greetings. Dr. Spireas was also the grand benefactor of the event, as well as one of the keynote speakers. The keynote address was by Maria Tsobanaki, the former Vice Mayor of Athens, as well as the Cultural Ambassador of Crete.
Mr. Louis Katsos, the master of ceremonies, presented this year’s Hellenic News Hall of Fame honorees with their plaques, along with Mr. Paul Kotrotsios. The 10 honorees were awarded for their illustrious services in their respective fields, which ranged from education, medicine, banking, humanitarianism, politics, economics, to entertainment journalism. The honorees included: Mr. Psaros, the co-founder and partner of KPS (who was unable to attend the ceremony), Nancy Papaioannou, the president of Atlantic Bank NYCB, John Koudounis, the CEO of Calamos, Dr. Michael Papaioannou from the International Monetary Fund, The Honorable Mike Pantelides, the mayor of Annapolis (Maryland), cardiologist Dr. Thomas Phiambolis, and AHEPA Supreme Governor Chris Diamantoukos.
Digital Journal’s very own Music Editor at Large, Markos Papadatos, was honored as its 2017 “Journalist of the Year.” Papadatos was recognized for his “dedication to journalism and the Greek American entertainment community,” according to his plaque. In his gracious acceptance speech, Papadatos remarked, “Thank you so much to the Hellenic News of America for this magnanimous honor. A special thank you to Mr. Paul Kotrotsios and Aphrodite Kotrotsios for paying tribute to my work! Congrats on the 30 year anniversary of the Hellenic News of America! I am so honored and humbled to be a part of it. I would like to take this time to thank several people who helped me along the way. Thank you to everybody from I.S. 25, Saint Francis Prep, to Waldbaums to Queens College. A special thank you to the Greek-American Press and to Digital Journal for giving me a platform to publish my work, and to share it with the rest of the world! A journalist is only as good as his reading audience.”
Emeritus Professor Marina Angel of Temple University and philanthropist Eleni Bousis were both unable to be present to accept their awards, so they accepted their accolades with a pre-recorded video acceptance speech.

After the awards presentation, a dinner reception followed, and entertainment was provided by Greek music star Dimitris Basis.

To learn more about the Hellenic News of America, check out its official website.