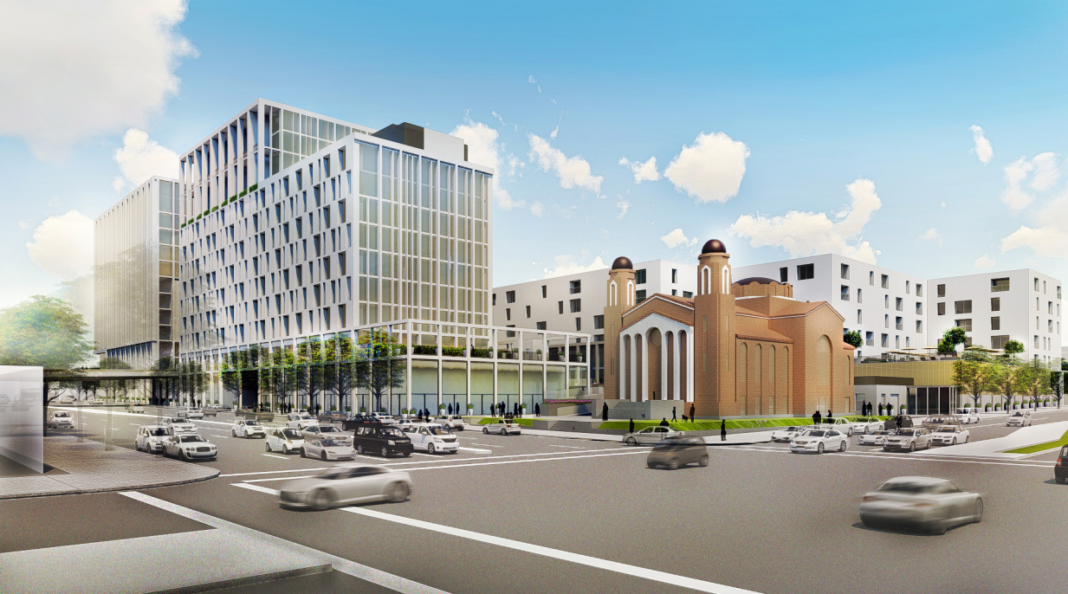 Salt Lake City—Feb. 24, 2020— The Greek Orthodox community of Greater Salt Lake announced a $12 million capital campaign to construct its new Hellenic Community Center. Anchored by the historic Holy Trinity Cathedral on 300 South and 300 West, Salt Lake City, the development will host a variety of facilities that will bolster the community and serve as the hub for Greek life within the state.

Fundraising kicked off when prominent community member and local restaurant owner, Gregory Skedros, made a $1 million commitment to the community center at the church. This inaugural donation was in honor of his son Anthony Skedros, who tragically passed away at a young age.

The aptly named Cornerstone Campaign, is being overseen by a board of dedicated members from the Greek Orthodox Community. The campaign is off to a resounding start with over $7 million raised to date, including considerable donations coming from active members of the community such as the Pappas family and Mouskondis family, who have each pledged $500,000 toward the project. Organizations outside of the Greek Orthodox Community have also stepped up to show their support with donations of $500,000 each coming from the Church of Jesus Christ of Latter-Day Saints and the Huntsman Foundation. One hundred percent of the funds raised will go towards the construction of this new Community Center.

“We are thrilled by the progress we have made in such a short time,” said Elpitha Tsoutsounakis, Cornerstone Campaign Vice Chair. “The generosity from the non-Orthodox Community is overwhelming and is a real testament to the value this community places on cultural diversity.”

The expanded Hellenic Cultural Museum will become a focal point of this project—complete with exhibits, bookstore, and adjacent library and research center to continue and support the preservation and scholarship of Hellenic legacy. The community center will also be equipped with administrative offices for the Clergy, Sunday school rooms, as well as a variety of spaces to support community activities and groups that include the annual Salt Lake City Greek Festival.

“This is a project of great importance not only to Salt Lake City, but to our entire state and fellow compatriots across the Greek Diaspora,” said Demetrios Skedros, Cornerstone Campaign Chairman. “It will provide a lasting legacy for future generations, maintaining the Hellenic foundation for family, faith, and ‘philotimo’ (love of honor.)”

The Community Center will share a campus with a modern and innovative development spanning nearly six acres and consisting of a mix of residential, retail, office, and hospitality spaces that will have a positive impact in the surrounding district and city. This development is being led through a strategic partnership between the Greek Orthodox community of Greater Salt Lake and the Woodbury Corporation, a full-service real estate development company. Greek Town will once again become a leading neighborhood in Salt Lake City to work, live and recreate.