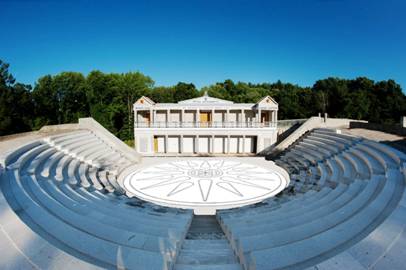 Julie Ziavras will perform for the ceremony to celebrate of the opening of the new Spartan Museum at the beautiful outdoor ancient style amphitheater The Alexander the Great Theater located at the main campus of the University of Connecticut, at Storrs, CT. Afterwards, she will perform for the fundraising dinner dance reception held at the adjacent Center for Hellenic Studies “Paideia” building, accompanying herself on guitar and joined by Kostas Psarros, bouzouki and Spiros Cardamis, keyboards. The event is free and open to the public.

The new Spartan Museum at UConn will emphasize the history and contributions of the Spartans and greater Laconian Region. It will feature a valuable collection of paintings, a newly commissioned statue of Leonidas and a sculpture depicting the Battle of Thermopylae. This tremendous undertaking was made possible by the vision and volunteer efforts of Professors Ilias Tomazos (founder of The Center for Hellenic Studies, Paideia) and Fotios Papadimitrakopoulos of UConn, with the help of the Pan Laconian Federation and with the generous volunteers and donors from the Greek community. This is a fundraising event to raise the funds to complete the museum. All donators names will be listed in a book kept at the museum and names of donors of over $2,000 will be engraved in a marble plaque that will be displayed at the museum. (See the donation form below). This event is part of the festivities of the 69th Annual Convention of the Pan Laconian Federation of US taking place this weekend at Storrs, CT.

Julie Ziavras‘s musical presentation for the ceremony will include a song by the prominent Spartan composer Alekos Panayiotopoulos and a song written to the poetry of the great Spartan poet Nikiforos Vrettakos. The performance will take place at the Alexander the Great Theater, an all marble classical styled outdoor amphitheatre that was recently completed, with seats for over 700 spectators. It is the first authentic classical styled open air theater in America and is a depiction of the ancient Greek theater of Epidavros with the orchestra, a two-story stage and a colonnade. The ceremony will be attended by many dignitaries. It will include a blessing of the museum and a presentation by retired Navy SEAL Lance Cummings, who will speak about his recent retracing of the epic journey taken in 480 BC by ancient Sparta’s 300 soldiers who marched from Sparta to Thermopylae to face the invading Persian army.

The dinner dance reception following the ceremony hosted by Paideia starts 6:00 pm. There is no charge for the dinner offered by Paideia, and donations are welcomed and encouraged.  Julie Ziavras will be joined by Spiros Cardamis on keyboard and Kostas Psarros, bouzouki presenting music from the region.

The Hellenic Society “Paideia” is a non-profit organization dedicated to educating students of all ages about the Hellenic language and culture. “Paideia” is the Greek word incorporating all the ideals of Classical Greece; education, instruction, discipline, culture, ideas, and citizenship. The “Paideia” Center features the Macedonia Educational Building, the Three Hieratchs Chapel and the Alexander the Great Theatre. The Macedonia Educational Building was opened in 1997 and includes multiple classrooms, several offices, student meeting rooms, a community hall, a library and an exhibit hall. Opened in 1995, the Three Hieratchs Chapel is the first and only Greek Orthodox chapel inside an American State University and is built in authentic Byzantine order with its interior done by iconographers and mosaic artists from Greece.  The Hellenic Studies curriculum offers Greek language, culture and history with courses on Modern and Ancient Greek and Byzantine language, history, dance, culinary arts and study abroad programs to various locations in Greece throughout the year. Visit: www.www.paideiausa.org. Call Paideia at 860-429-8518.