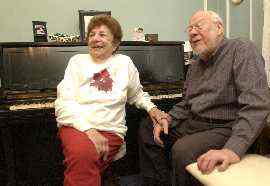 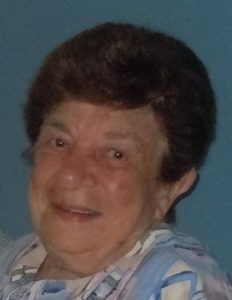 I never left you

I watch you everyday

I am always very near

I know dep in your heart

You realize I am here

I watch you while you sleep

In your bed at home

I hear you when you speak to me

When you are on your own

The reason why I have gone

But I will never leave you

I am there to keep you strong

Talk to me I hear you

Though you may not see

That will always be

For our love is forever

Just remember me in your heart

And one day we will be together

Live your life and live it full

Remember I am always with you

Every step of the way

In honor of mom’s memory…

We love you deeply!!

Couple has been making beautiful music for years

Upper Darby—Two music maestros who met at a piano keyboard more than half a century ago have been tickling the ivories ever since.

Music lovers Frederick and Despina Lewis taught a countless number of children and adults during their respective careers –Fred, 76, for public schools for 42 years, and Despina, 86, in private schools and in their home for 71 years.

Married for 52 years, they first met when Despina Chletcos was Fred’s piano teacher at a private music school in Philadelphia. Fred advanced to studying music at the prestigious Curtis Institute of Music for eight years.

“I remember the name of my first pupil,” Despina said.  “Joanie Walls.  She was 6 and her mother was the director of the school where I was taking lessons and studying in the Presser Building at 17th and Chestnut streets. She was a good student.

“I had a student recently who is going to Stanford University getting her doctorate in drama and music.  She composes music too.

“I taught my husband when I had two grand pianos in my studio.  We had a lot of arguments then.  He studied with me and then got a scholarship to the school.”

They wed in 1957 after Fred was discharged from the Air Force, where he entertained the troops, sometimes serving as piano accompaniment for Bob Hope and Anita Ekberg.

The couple remained in Philadelphia, where she continued to teach in music studios and Fred pursued studies at Curtis.

After Curtis, Fred taught at the Granoff School of Music in Philadelphia for four years, in the Philadelphia School District for eight years, for one year at Temple University and 33 years at the Community College of Philadelphia teaching piano, composition, theory, ear training, music appreciation and music history before retiring last year.

A composer excelling in classical piano and jazz, Fred has had his works performed by orchestras in Washington, D.C., New York and Philadelphia.

He was a member of the Monarchs Band, well-known in the tri-state area for performing at popular night spots such as the Hawaiian Cottage, Pub Tiki and the Latin Casino in New Jersey, Palumbo’s in South Philadelphia and the Shack in Upper Darby.  All are now shuttered.

Fred played for legendary singing artists such as Al Martino, Paul Anka, Frank Sinatra and Bobby Darin, when they were performing in the area, for local greats Skippy Devine and Pat Damiani, and he became Martino’s musical director.

The couple moved to the Cardington Stonehurst section of Upper Darby in 1964, where Despina spent the last 45 years teaching piano in their home Mondays through Saturdays without putting out a shingle.

Despina could not fathom the number of students taught during seven decades, but they included her three children, Veronica Crisp of Drexel Hill, Frederick O. Lewis III of San Francisco and Jeffery Lewis of Newtown Square, who began as preschoolers, and her six grandchildren, who all still play the piano.

“Children used to be able to walk to their lessons,” Despina said.  “Then they had to be driven because they didn’t live in the neighborhood anymore.”

The Lewis’s have three pianos in their home, an upright in the dining room and two in the basement.

“Sometimes, there would be a student downstairs and a student upstairs at the same time, and my dad would help out my mother,” Fred III said.  “Everyone in the neighborhood growing up at some point came to Mrs. Lewis for piano lessons.  I can remember playing in the basement and if I hit a wrong note, she would hear it and call down to me.”

While Fred still plays piano, arthritis has prevented Despina from enjoying her vocation.  She had tinges of regret after receiving notes from students and former students upon her retirement.

“The students were so appreciative,” Despina said.  “I thought, ‘why am I giving this up?”