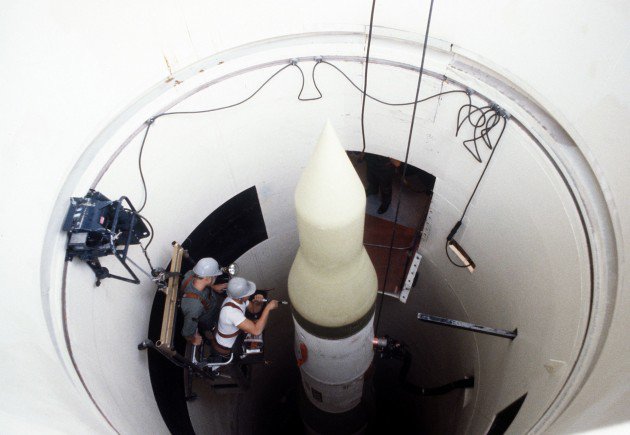 Some anti-nuclear groups along with former Secretary of Defense William Perry suggesteliminating ICBMs in part to save money on upcoming nuclear modernization. Getting rid of ICBMs would be a serious mistake.

The U.S. nuclear triad protects the U.S. homeland and allies from a surprise nuclear attack with three types of nuclear delivery systems: Minuteman III Intercontinental Ballistic Missiles (ICBMs), submarine-launched ballistic missile and manned bombers. Today’s ICBM force was fielded in 1970 with a planned service life of 10 years, but has been modernized to last decades longer. Today, though, the missiles are long overdue for replacement, which is why the Air Force and Congress support building a new Ground-Based Strategic Deterrent.

To ensure the U.S. strategic deterrent is credible, it must be recapitalized every 30 years. Refurbishing the current ICBM force would not be an effective option. It would cost more to update and sustain the missiles with outdated parts. Some missiles would also have to be used for testing which would decrease the total number of missiles ready to respond to a nuclear first strike. As a result, a renovated ICBM force would likely fail to deter aggressors effectively.

Effective deterrence is a function of real capabilities and the perception by potential adversaries of a credible national will to respond to aggression. Rivals must believe the U.S. will take action before its nuclear arsenal is destroyed or by making sure it has a second-strike capability. To make the first use of nuclear weapons irrational, enough deterrent forces must survive a surprise attack and damage the aggressor in retaliation.

Each part of the nuclear triad serves a different purpose. ICBMs are on alert and ready to respond, air bombers visibly assure protection of allies, and nuclear submarines are invisible underwater. The U.S. is in the process of having 400 armed ICBMs, with 50 unarmed missiles in reserve, to comply with arms control treaties by 2018.

The president controls ICBMs found in hardened underground silos at Air Force bases in Montana, North Dakota, and Wyoming that are on alert and allow for a timely response. Each missile carries a warhead of about 300 to 500 kilotons.

Of the three components of the triad, the ICBM force is the least expensive and protects against technological problems that may emerge in the other legs of the triad. The land leg serves as an insurance policy because it cannot be wiped out by an adversary’s conventional forces, and each underground missile would have to be hit with more than one nuclear weapon to even have a chance of penetrating the hardened silos.

Since these missiles sit in silos far away from one another, it is impossible for an enemy to entirely destroy them. An aggressor would need substantial nuclear forces to do so and America would respond with a deadly second strike if an enemy decided to launch a nuclear attack. As a result, stability is attained because it would cost an aggressor more than any of the perceived benefits that would result from launching a nuclear attack.

If ICBMs were nonexistent, however, the number of targets an adversary would aim to demolish on American soil would dwindle from hundreds to a handful, increasing the likelihood of conflict.

Getting rid of ICBMs may motivate potential adversaries to launch a nuclear first strike against the U.S. and develop the technological capability to locate nuclear submarines underwater, placing them at risk of a conventional force attack.  In future arms control agreements with Russia, Washington would only have submarines and bombers to negotiate with if ICBMs did not exist. Meanwhile Moscow is modernizing much of its missile force, some with the capability of carrying 10 nuclear warheads, according to published Russian reports.

Instead of eliminating the land-leg of the nuclear triad, Washington should focus on ways to reduce its costs. One example is how the U.S. Navy and Air Force are working together to identify areas of commonality to modernize the ICBMs and submarine-launched missiles. The recapitalization timeframes for their delivery systems overlap and provide an opportunity to identify life-cycle savings. The services must ensure benefits from commonality options outweigh costs and still make certain America retains a safe, secure, and effective credible nuclear deterrent.

It is time to modernize the aging ICBM force. The Minuteman missiles are essential to a credible and capable deterrent. Eliminating Minuteman missiles from the strategic arsenal would be a mistake that would put America and allies in danger. As President Kennedy remarked after the Cuban missile crisis, some 54 years ago, “Minuteman was my ace in the hole,” and it remains so today. As commander of Strategic Command Adm. Cecil Haney has said, nuclear modernization is not an option – it must happen.

Constance Baroudos is vice president at the Lexington Institute, a Washington thinktank. Peter Huessy, president of defense consulting firm GeoStrategic Analysis, is an expert on international nuclear issues and organizes the Congressional Breakfast Seminar series for the Air Force Association.