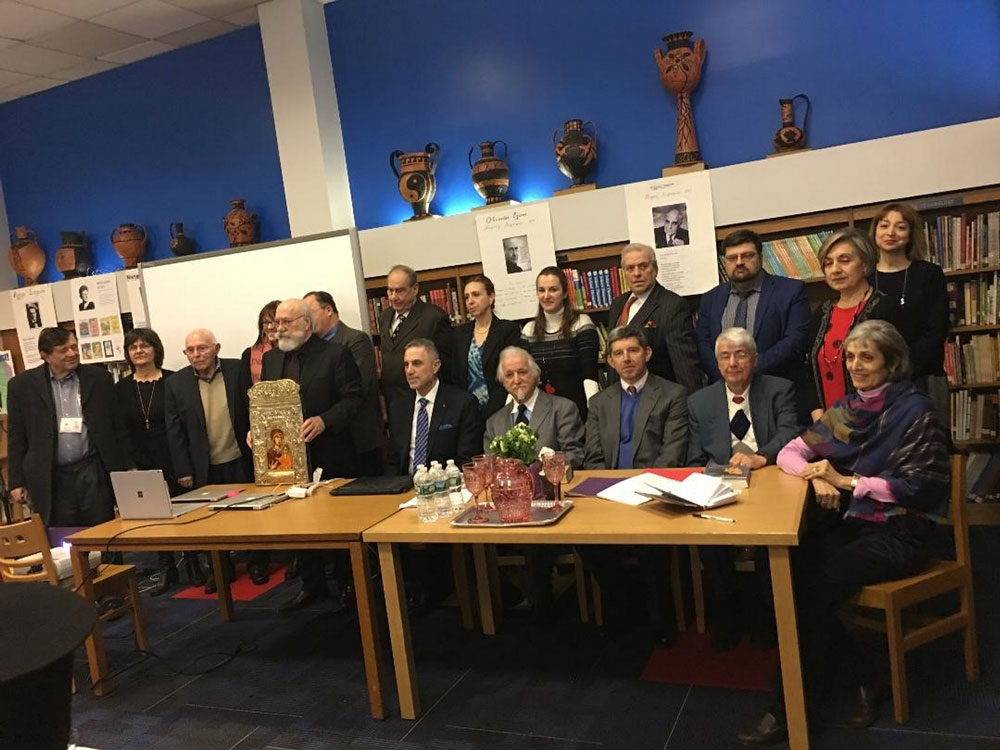 What is a Symposium? It is a conference or meeting to discuss a subject with a collection of essays or papers by a number of contributors. In ancient times, it had a more festive meaning. The Greek Teachers Association “Prometheus”, the Federation of Hellenic-American Educators & Cultural Associations of America and the Pan Pontian Federation of the United States and Canada held their First Symposium on Sunday, February 17th, in the Library of St. Demetrios School of the St. Demetrios Cathedral of Astoria. The Symposium celebrated the Three Hierarchs Greek Letters Day, the World Day of Greek Language and commemoration of the 100 Year Anniversary of the Pontian and Asia Minor Genocide. Greek Teachers Association “Prometheus” President Demosthenes Triantafillou and Board welcomed over 125 persons. A luncheon preceded the Symposium presented by educators, scholars and community activists of America. Educator Meropi Kyriakou created the informative Symposium booklet.

Greek Letters Day celebrates the Three Hierarchs of the Orthodox Church: St. Basil the Great, St. Gregory the Theologian, and St. John Chrysostom. The Three Hierarchs developed Greek literature and education. They lived from about 329-409 A.D. Greek Letters Day celebrates the use and promotion of the Greek language abroad. The Greek genocide, including the Pontic genocide, was the systematic genocide of the Christian Ottoman Greek population carried out in its historic homeland in Anatolia during World War I and its aftermath (1914–1922). It was instigated by the government of the Ottoman Empire and the Turkish national movement against the indigenous Greek population of the Empire and it included massacres, forced deportations involving death marches, summary expulsions, arbitrary execution, and the destruction of Eastern Orthodox cultural, historical, and religious monuments.1

Mrs. Stella Kokolis, President of the Federation of Hellenic-American Educators & Cultural Associations of America, sent greetings from Florida. “I am very happy and proud that the last 8 years I was able to help and promote the Greek language in a more productive way,” she said. “I organized seminars around the country and in Cyprus in order to teach the teachers new approaches to teach the language to our children.  Also, I was able to meet educators around the county to talk about their work experience which was different from state to state, hear their problems and their concerns.  I was able to organize a historic pilgrimage In Memory Of John Giannopoulos.  He was the young man who came to this great country in the late years of 1700s. His first thought was to build a school. This school is the only wooden school in the U.S.A. that is still in existence.  Also, I am very pleased that my association of teachers around the country especially the Athena Teachers Association of Florida, are cooperating with me on my successful endeavors.”

The Symposium opened with prayers by Rev. Fr. Economos John C. Paizis and Father Evgenios Georgantakis. “Today, we have the first Symposium in 46 years of Prometheus,” explained President Triantafillou. “The theme of how to include in the Greek Curriculum and books the Genocide of Hellenism of Asian Minor is supported. Educations books never mention The Asia Minor Catastrophe and Pontian genocide. It is our obligation to write to all Departments of Education to include this topic. Plato and Aristotle philosophies’ should be learned by our youth through the curriculum”

The Keynote speaker, Dr. Panos Stavrianidis spoke on “The Hellenic Genocide of Asia Minor.” Professor Stavrianidis described the contribution of the Fathers of Greek Letters, the Three Hierarchs, who came from the Greek Christian Centers of Asia Minor. “The elimination of all Greek communities in Asia Minor and the Pontus (Black Sea coast) from 1915-1923 was the greatest catastrophe after the Fall of Constantinople in 1453,” he explained. “The genocide was instigated by the national movement of Kemal Ataturk, backed by the Germans, who eliminated the Armenian, Assyrian and Greek population through massacres, forced deportations involving death marches, execution and destruction of the Eastern Orthodox cultural, historical and religious monuments.” Demetris Molohides, President of the Pan-Pontian Federation of America & Canada, added “the Greek genocide began in 1913 with Thrace persecution. No one objected. Turkish aggression has continued during the past 100 years. Genocides must be written in History books.  Consul General of Cyprus Alexis Phedonos-Vadet remarked: “that better days are coming to Cyprus.” Dr. John Nathenas displayed and discussed a copy of the “Panagia Sumela” miraculous icon from the Sumela Monastery in the Pontus.

President Triantafillou explained The first section of the Symposium is devoted to the enrichment of curriculum and textbooks and includes the contributions of Alexandros Columbos, “Learning History and Greek Manuscripts and Ancient Manuscript”,  Meropi Kyriakou, “The Making of Cultural Identity through School Holidays”, and Dr. Cleomenis Paraskevas, “Presentation of help books for Plato and Aristotle”.

“We must review primary sources on epigrams, alphabet and language,” said Educator Alexander Columbos in his multimedia presentation. “Propaganda is spread that Christians destroyed Papyrus. Scholars wrote the Greek liturgy over ancient manuscripts for economic purposes. Educators can contact me on the use of multimedia materials. Visit our website http://www.greekteachersprometheus.org/.

Educator Meropi Kyriakou showed her integration of cultural identity at the schools of Fairview and Tenafly New Jersey and Rye, New York.  “Their active participation in historical holidays through plays, dances and theatrical participations inspires a love of the country.”  Dr. Kleomenis Paraskevas presented the books “Selections of Plato’s and Aristotle’s Teachings” by Theodore Korbilas, as an excellent resource book for Teachers, students and parents. Both Platonic and Aristotelian ethical and metaphysical thinking formed the foundations of Christian Theology and Governments.” For more information on these books, email Dr. Paraskevas at [email protected].

Part II of the Symposium included: “Organization of the 6-8 grades Spelling Bee” by Dr. George Tsioulias, President of the School Board of the Greek Afternoon School of St. Demetrios; Maria Dini, “The work of students at home through the program of modern technology: Google Classroom”; the contributions of Angelika Aga and Frederika Sabiana on the topic “Contest in the spelling of Greek words for pupils of the 6th, 7th and 8th grade” and Maria Sardi “Ellinomathia and the books of ‘Klik’.

“ The students of St. Demetrios Greek Afternoon School in Astoria will compete June 8th in a Greek Spelling Bee,” Dr. Tsioulias informed all. “The competition will have the participation of the top spellers among the students from the 6th, 7th, and 8th grades.  The Arcadians helped to colonize the Evxinos Pontus Black Sea coast. Around 8th to 5th centuries AD. There were 100 gymnasiums wiped out in Asia Minor. We are working to promote St. Demetrios School system.”

Educator Maria Dini believes “computer Gmail is important in Greek education. Students communicate online today with teachers. This technology must be implemented with Greek school online teaching.” Maria Sardi described “Ellinomathia books as leading to international certificates in Greek.” Visit http://www.greek-language.gr/certification/ for information. Educator ‘Principal Frederika Sagianis explained “I have now decided to take this to the next level. To use digital media to promote a program that is very dear to my heart. To become a cheerleader for an annual Greek Language Spelling Bee.” For more information, visit Mrs. Frederika Sagiani-Panagiotakis on Facebook. Prof Asher Matathias enlightened all on the Jewish Holocaust in Thessaloniki.

On May 16, Prometheus will organize the annual student essay contest in memory of Dr.  George Papanicolaou. Five scholarships of $ 250.00 each will be awarded for the best essays. Both Organizations will cosponsor an honorary May Luncheon. Fifty percent of proceeds will be used for the financial support of the Prometheus Pension Fund. Another 50% of revenue will aid the Teachers Seminar program of the Archdiocese in Cyprus. His Eminence, Archbishop Demetrios of the Greek Orthodox Archdiocese of America will be honored.

During the summer of 2019, in July, Prometheus will be sponsoring its first Educational Journey to Greece for the Graduating 8th and/or 9th Graders of the Greek afternoon and Saturday schools. The Director of the summer educational program will be Prometheus President Demosthenes Triantafillou. The educator has organized successfully 19 consecutive summer programs to Greece and Dodecanese Islands with the Institute of Dodecanesian Studies of America.

Funds from the Barbara Triantafillou Fund was deposited to the treasury of Prometheus for the purpose of opening individual accounts in the Greek Teacher’s Pension Fund. President Triantafillou stated that the decision to establish the Pension Fund has attracted the interest of members, friends and supporters of the Association. He stressed that 2019 will be a decisive year. “This is an innovation of our Association which must be promoted and, most importantly, start pledges to strengthen the fund,” President Triantafillou said. “It is the first in the history of Greek education in America. The Fund was created exclusively for teachers and members of Prometheus. A great desire and a dream of at least three generations of teachers took flesh and bone. We call on all Greek community and Greek education lovers to strengthen the Fund and make 2019 the most historic year for Greek Masters.”

Educator Demosthenes Triantafillou is the founder and first Principal of St. Demetrios Greek American High School, the only Overseas Greek High School outside of Greece with Nikos Andriotis. Dr.Anastasios Kourlamanis, his successor, said “ as part of the Saint Demetrios community history, we should not forget the school system established by the hard-working Greek Americans who wanted a new generation of children to learn the values of their rich heritage and faith. The students of our school system continue to make us proud with their achievements. It is our responsibility to continue the dream that was established in 1956: the St. Demetrios School system must be viewed as the “jewel” od our historic community.”