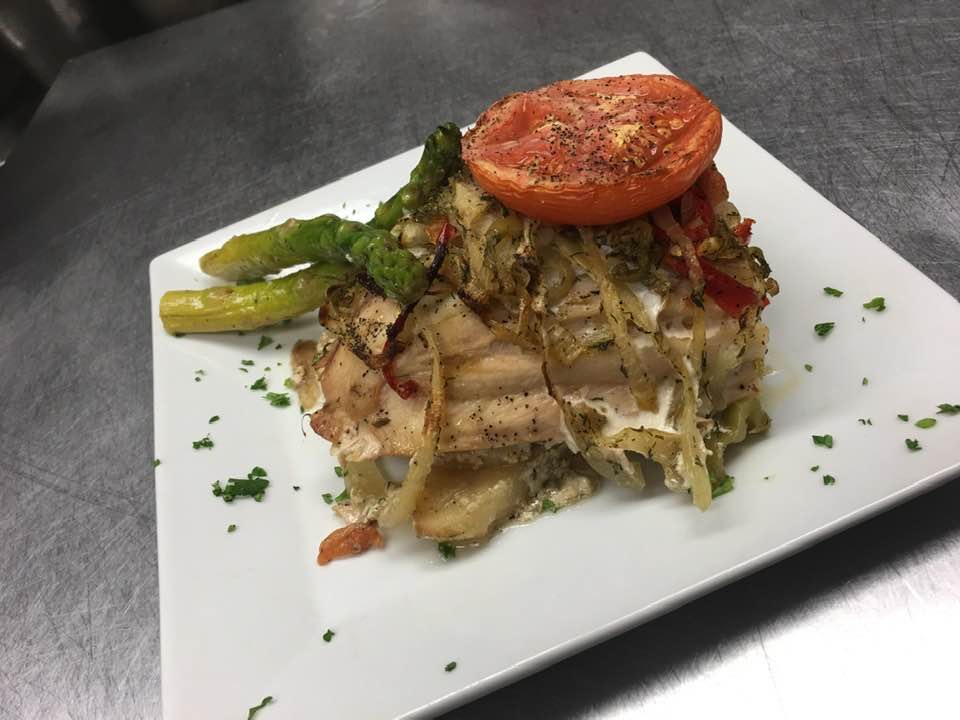 By: Sokratis Ballas, Special to the Hellenic News of America

Typically, if I wanted to enjoy an authentic ‘Kreatopita’, which is indigenous to the Ionian Island of Kefalonia, I’d either have to ask my mother to make it or take a trip to Kefalonia and go to one of the many eateries that offer this ‘sacred’ local dish. The secret to this masterpiece comes in two parts; the ever-important handmade filo and the filling, which typically consists of marinated pieces of lamb, diced potatoes, and rice. But now, thankfully, all I have to do is jump in my car, program my GPS to FAROS GREEK CUISINE at 337 Applegarth Rd., Monroe Twp., NJ 08831, and PRESTO, I’m in heaven! Culinary heaven that is!

Chef / Owner Gerasimos Spathis has come a long way since his humble beginnings as a young boy watching his mother, Eleftheria Spathis, cook in their kitchen. He immediately acknowledged his intrigue for food, tradition, and culture. He inherited an array of culinary weapons from his mom; they range from baking a variety of bread to a plethora of authentic Greek pastries and the good old traditional Cephalonian dishes, like the Kreatopita listed above. His journey from the small village of Skala to the kitchens of New Jersey is an inspirational one.

Gerasimos was born in Skala, Kefalonia, Greece. He relocated to Athens in 1972 where he could find a job to help support his family back in Skala, all the while attending night classes to further his education. While attending night school, his job happened to be in the foodservice sector. This is when he identified what he wanted to do professionally. After he concluded his studies to achieve his diploma, he then set about to study at the Culinary School of Anavysos in Athens. After graduation, his talents were immediately recognized. Opportunities started to find him. One of the most prestigious and memorable experiences for Gerasimos was when he was an Assistant Chef to the Personal Chef for the Aristotle Onassis family.

After completing these initial endeavors, Gerasimos commenced his patriotic duty by serving in the Greek Army. He enlisted in 1979 and completed his duties in 1981. He did his part by cooking memorable meals for his fellow soldiers and by becoming a culinary instructor for those who had an interest in learning. This led him to become the Personal Chef to the Greek Army General, ultimately adding to an already dynamic resume’. He acted as Personal Chef to the General for a little under 2-years.

Soon after completing his term in the Greek Army, in 1983 he opened his first restaurant in Pagrati, Athens, and successfully operated this store for 4-years until his father became ill. Gerasimos then returned to his native island of Kefalonia to offer unconditional support to his father, to help him back to health. While back in Skala, he pursued his culinary calling by opening several seasonal locations that would cater to the Cephalonian tourists. During the off-season, he would go to Germany and operate another seasonal Greek establishment there. So between two seasonal locations in two different countries, Gerasimos was off to the races, making a name for himself in Greece and in Germany. But the best was yet to come!

Gerasimos was incredibly happy where he was, and proud of what he had achieved up to that point in his life. However, his dearest and oldest friend from Skala Elementary School, Dennis, lived in America and would not stop hassling him to come to America. After 2 years of receiving persistent calls from his dear friend Dennis, he finally gave in and decided to give America a try in 2011.

After deciding to stay in the U.S., New Jersey became his new home in 2012. His first professional role came as the Executive Chef at Ouzo Taverna in Monroe Twp., having created their spectacular, authentic Greek menu. It was at Ouzo Taverna where he was introduced to Mary Jo. They started talking one day, as Mary Jo was fluent in Gerasimos’ s native language, and they hit it off… and the rest is history! Shortly thereafter they got married and started working together in the Greek restaurant industry.

After completing his stay at Ouzo Taverna in 2014, he then became Executive Chef at Apella Greek Taverna in Eatontown, NJ. This time, with Mary Jo by his side. They stayed at Apella for about a year, and then Gerasimos and Mary Jo found exactly what they were looking for; a small quaint restaurant that they could call their own. Finally, in October 2016, Gerasimos Spathis became the proud owner of Faros Greek Cuisine in Monroe Twp., NJ. The Chef’s reputation must have followed him there because the store was an immediate success from the very beginning! FAROS GREEK CUISINE is undeniably the Greek Jewel of Monroe. The saying typically goes ‘seeing is believing’… but in this case ‘tasting is believing’ as well.