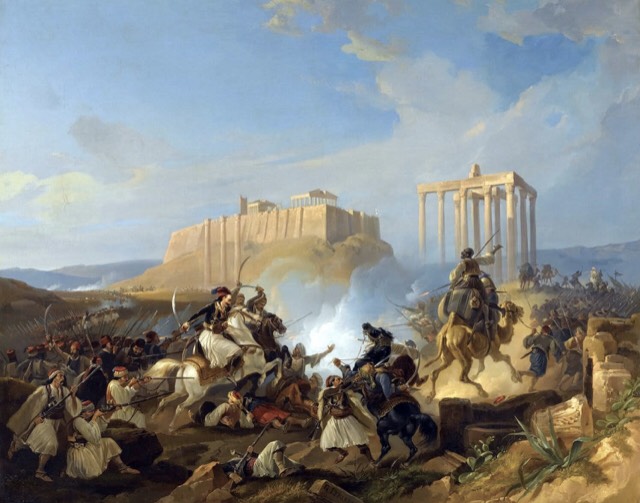 “Greeks, God signed for our freedom and he won’t take his signature back”

– General Theodoros Kolokotronis, Hero of the Greek War of Independence –

As we celebrate the anniversary of Greek Independence for more than four hundred years of Ottoman rule, Democracy, worldwide, is under assault. With authoritarianism on the rise, Greek Independence Day is important for all who cherish freedom to remember. On three occasions during the span of less than 125 years, freedom’s light in Greece came dangerously close to being extinguished by some of the darkest forces of seemingly invincible tyranny; in the 1820’s by the Ottoman Turks, in the 1940’s by the Axis powers, and in the mid to late 1940’s by Communist insurgents. In each struggle, the Greeks fought against much more difficult odds than we face today.

When Greece, the underdog, struck an unlikely blow for freedom against the seemingly invincible Ottoman Empire, democracy was reborn in its birthplace. Ottoman Turkish occupied Greece had missed out on the European enlightenment and the revolutions, such as the American Revolution, which were inspired by Ancient Greek civilization ideals of freedom and democracy. The Greeks, who had endured more than four hundred years of Ottoman Turkish occupation and attempts to erase their history, language, traditions, and culture, showed the world that freedom’s light can never be fully extinguished.

Thomas Jefferson, who was inspired by the teachings of the Ancient Greeks noted: “To the ancient Greeks…we are all in-debted for the light which led ourselves [American colonists] out of gothic darkness.”  As freedom’s light burned brighter in the United States following our successful War of Independence from the seemingly invincible Great Britain, America’s success would become a source of inspiration to the modern Greeks, as noted in 1821 by Greek War of Independence, Commander in Chief, Petros Mavromichalis when he said to the citizens of the US: ‘‘it is in your land that liberty has fixed her abode and…in imitating you, we shall imitate our ancestors and be thought worthy of them if we succeed in resembling you.’’

In October of 1940, 119 years from the beginning of their struggle against the Ottoman Turks, darkness descended upon Greece, once again. The Axis forces of Hitler’s Nazi Germany and her Allies had defeated fifteen countries in Europe, including France, the greatest European military power at the time, with little or no resistance. The Greeks stood alone as they defiantly said “Oxi” (“No”) to submitting to Axis-Fascist Mussolini’s Italian Army invasion. The Greeks’ defeat of Mussolini’s army, the first Allied victory against seemingly invincible Axis forces that had nearly defeated all of Europe, marked a turning point in the war. Although Greece would fall to Nazi German occupation by June of 1941 after the fall of Crete, the valiant and continuing resistance of the Greeks would continue to inspire resistance fighters and Allied forces throughout Europe. Moved by the Greek resistance to tyranny, US President Franklin Roosevelt said: “When the entire world had lost all hope, the Greek people dared to question the invincibility of the German monster raising against it the proud spirit of freedom.” Winston Churchill noted: “Hence, we will not say that Greeks fight like heroes, but that heroes fight like Greeks.”

With the defeat of Nazi tyranny in WWII, however, some of Greece’s darkest days would come as war torn Greece became ground zero in the first proxy war of the Cold War. The highly polarized struggle between the ideologies of the left and right and attempts to fill the power vacuum left by the retreat of the Axis powers, escalated to armed violence. Armed rebellion ensued between Greeks as leftists refused to disarm and called for resistance. The Greek Civil War against Communist tyranny from 1944 to 1949 fought by Greeks supported by Great Britain and then, the US, against Greeks supported by the newly formed Socialist countries of Yugoslavia, Bulgaria, and Albania, backed by the Soviet Union, pitted brother against brother as Communists attempted to bring Greece behind the “iron curtain.” A combination of US Truman Doctrine Aid, Marshall Plan Aid, and US military advisor support led by US Army General James Van Fleet, supported the most successful counter-insurgency effort of the twentieth century. Freedom loving Greeks defeated the Greek Communist guerrillas and proved, once again, against all odds they had the “will to win,” as the General would say, to keep freedom’s light burning.

May all who struggle to keep freedom’s light burning draw inspiration from the courage of the Greeks.

US Senator Menendez to receive honorary doctorate from NKUA