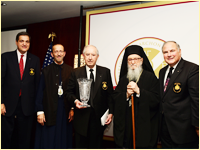 Theofanis V. Economidis, a long-time member of Leadership 100, was honored with the 2016 “Nicholas J. Bouras Award for Extraordinary Archon Stewardship” by the Order of Saint Andrew the Apostle, Archons of the Ecumenical Patriarchate, at a special tribute dinner dance kicking off the Annual Archon Weekend at The New York Marriott Marquis on Friday, October 14, 2016.

His Eminence Metropolitan Gerasimos of San Francisco joined His Eminence Archbishop Demetrios, Geron of America and Dr. Anthony J. Limberakis, National Commander of the Order of Saint Andrew, in presenting the prestigious Award that was created in 2010 and named after the late National Vice Commander of the Order, Nicholas J. Bouras. The Award is bestowed annually upon an individual who has demonstrated extraordinary and incomparable stewardship to the Order. Bouras was also a long-time member of the Leadership 100 Board of Trustees and is acknowledged to this day as an Honorary Board Member.

George M. Marcus, member of Leadership 100, introducing the honoree, stated that he is “a visionary and devoted steward of the church and has exemplified extraordinary leadership. His lifelong humble service to the Orthodox Church is truly an inspiration to us all.”  Attendees were welcomed by George E. Safiol, a member of Leadership 100 Board of Trustees and Award Committee Chairman, the Honorable B. Theodore Bozonelis, Secretary of the Order of Saint Andrew.  John C. Metaxas served as master of ceremonies.

In accepting the award Mr. Economidis stated he “came to America, a place and idea modeled after our heritage and powered by our faith in God. With the values we learned from our parents – philotimo, integrity, and public service, we exceeded their dreams and expectations of us and now it is our turn to pass on that flame to our children.” He dedicated this award to the memory of his wife Efstathia. His only daughter Roberta (Hariklia), a prominent attorney in San Francisco, was also in attendance.

As an Archon of the Order of Saint Andrew since 1996, he has been a champion of religious freedom for the Ecumenical Patriarchate and serves as a member of the Archon National Council and as Metropolis of San Francisco Regional Archon Commander. He is also a member of the Executive Committee of the Archdiocesan Council. In December of 2006 he was elected to serve as the General Chairman of the “International Convention of Hellenes Abroad (SAE)” in Thessaloniki, Greece and in the same year he received the highest honor by the Organization of the Retired Greek Artillery General Officers in Athens, Greece.