A Traditional Baptism of the Peloponnese, Greece 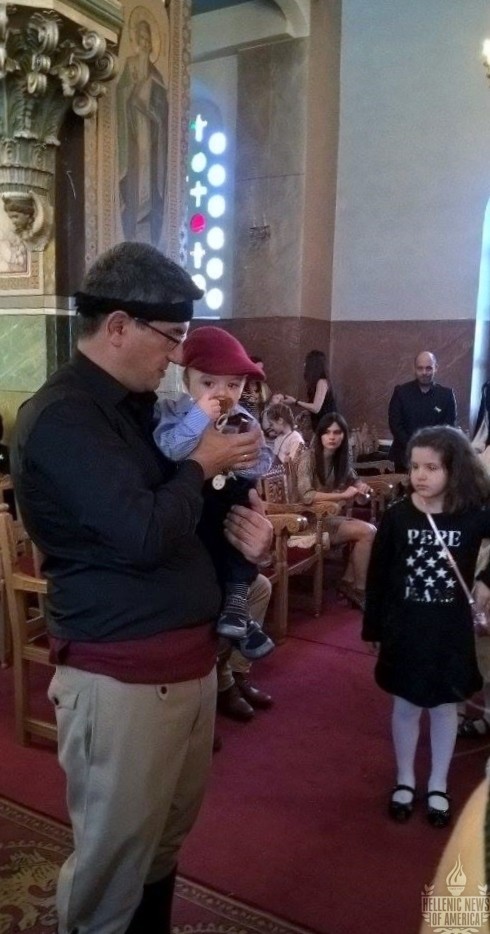 The Peloponnese landscape is mountainous with valleys and planes of olive and citrus groves. The people give it character. The Arcadians, centered around its capital of Tripoli, are proud of their heritage. Hardworking, friendly, they welcome all with hospitality. Myth and history are interconnected in a natural paradise.

The heart and soul of the Modern Greek is expressed in their religious sacraments of the Greek Orthodox Church. Baptism is special to the Arcadians. Dr. Alexios Vardouniotis, ENT surgeon and his wife, Kanela Karampela Vardounioti, Psychologist/Ph.D. candidate, recently baptized their son, Giorgos-Kirk, at Piana, Arcadia. The Vardouniotis men and friends wore the Evzone foustanella. The godfather, Ioannis Papadakis of Crete, wore the Cretan attire. The baptism was held at St. George Church. The parents have a second son named Spiros-Clint.

The Evzone foustanella resembles the uniform of the klept (guerilla fighter) soldiers of the 1821 Greek Revolution. It is pleated 400 times for the 400 years of Turkish occupation. Some scholars believe the foustanella is derived from ancient Greek garments. An early 5th century B.C. relief in Vari Cave of Attica, explored by Charles Heald Weller of the American School of Classical Studies at Athens, shows the stonecutter Archedemus the Nympholept wearing a foustanella-like garment. In Byzantine times, the akrite (border soldiers of Eastern front) wore a heavy pleated fustanella.1

Piana, where the baptism took place, is a historical village of  Arcadia. It is one of the most beautiful traditional Greek villages of the Peloponnese. It is built at the Mainalos Mountain, near the ruins of the ancient city Dipaia. Its population was 70 at the 2011 census. The name of Piana is connected with the mythological god Pan. According to ancient Greek mythology, Pan had the legs of the goat under his human body. Piana belongs to the province of Mantinea. It is south of Tripoli, the capital of the Prefecture Arcadia. St. George church, the baptismal site, is built on an imposing rock in the center of the village. During the Ottoman Empire, it was a castle.

The village played a decisive role in the Revolution of 1821. Theodore Kolokotronis, the Greek “George Washington” organized his forces, striking the first major battle at Valtesi. The name of Piana is historically connected with the catering of Kolokotronis’ armed forces with the essentials for their winning battles. The Folklore Museum has religious and ecclesiastical heirlooms, as well as samples of martial equipment of the fighters of the Greek Revolution of 1821.3 The Vardouniotis baptism is highly symbolic. It showed the traditions of Arcadia and Crete that are kept alive in 2016 Greece.