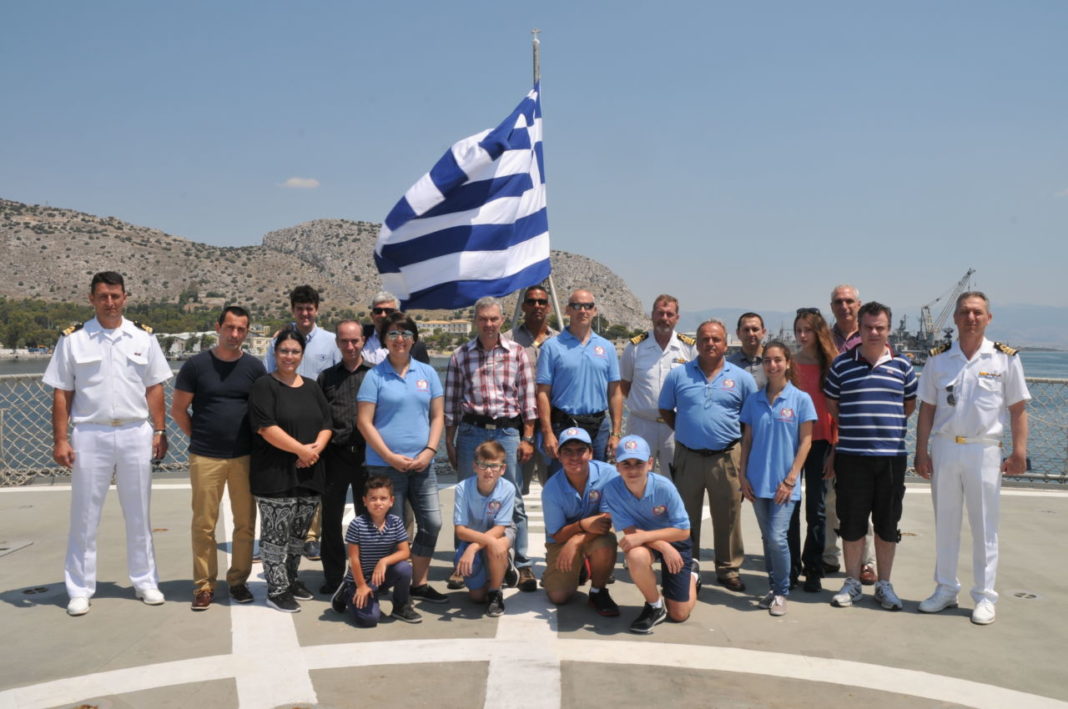 During an informative and inspiring morning and afternoon visit on July 10 members of the Order of AHEPA from the United States hosted by the Commander-In-Chief of the Hellenic Fleet Vice-Admiral Ioannis G. Pavlopoulos and his colleagues experienced an historic special tour and series of briefings at the Headquarters of the Hellenic Navy on the Island of Salamis.

The warmth exuded by the hosts who constantly expressed their appreciation for the love for the homeland that exists in the Hellenic Diaspora matched the radiance from above during the sun-drenched day that included numerous ferry and speedboat rides between facilities on Salamis and the town of Skaramanga on the mainland.
Thanks for reading Hellenic News of America
Subscribe to HNA

The delegation from America was led by Sons of Pericles Advisor Eric Hill (AKA Ηρακλης Βουνιδης) and Pammachon Headmaster Kostas Dervenis, on whose initiative the visit was organized, and Past AHEPA District 2 Governor Kostas Sofikitis. A presentation about the visit is expected to take place at AHEPA’s upcoming Supreme Convention in Orlando. FL.

It was an historic event for the Greek-American community – one whose delay the hosts and organizers were honored to have been able to redress. “It was a first-ever event, AHEPA, Sons of Pericles, Maids of Athena and AHEPA youth from across the state of Florida were represented, as well as our brothers from AHEPA Manhattan Delphi Chapter 25 which was represented by an officer, an active member and an AHEPA Youth,” Hill said.
The hosts and visitors alike spoke of the importance of such events that create direct links between the Greeks of the Diaspora and the armed forces of the homeland.
While noting the tremendous respect the US and its NATO allies already have for the Greek military – the importance of the growing and deepening ties between Greece, Cyprus and Israel were also emphasized – speakers urged the visitors to share their experiences with their fellow Hellenes and Americans, and especially with their representatives in Washington.
What they saw was a heartwarming and reassuring display of professionalism and skill of the personnel at the heart of  a powerful and dependable defense of Hellas and the Western alliance “through a technocratic command of military assets (sailors, including elite Hellenic Navy SEALs) systems, and innovative policy initiatives,” Hill said.

Boarding the state of the art vessels in the vanguard of the defense of Hellas, including the frigate “Psara” and the submarine “Pipinos”,  the guests were delighted to see dozens of crafts from every category of Greek naval defense – huge landing craft, gunships armed with the latest missiles, and speedboats used by Hellenic Naval Special Forces (OYK).

The submarines, whose technological superiority constitutes a force multiplier, are a vital part of the Hellenic naval strategy, justifying their high cost.

The guests were very impressed when they were informed that during the crisis, numerous Greek ship owners, including Gianna Angelopoulos-Daskalaki, have stepped up and financed the purchase of critical items. Vice Admiral Pavlopoulos praised them for continuing in the spirit of historical grand benefactors of the Greek armed forces such as the Averoff family, and the Greek diaspora of the 1821 era, and invited today’s Hellene’s abroad to also contribute to the mission of keeping Greece’s army, navy and air force qualitatively ahead of adversaries with quantitative advantages.

One of the highlights of the visit included a tour their training grounds and greetings from some of those elite Naval forces.

Hill said  “We would like to thank the sailors and elite Hellenic Navy Special Forces (their faces could not be shown because their identities are quite literally state secrets) for the historic tour of Hellenic Navy Headquarters hospitality and the display of skill.”

The guests were free to take any photos they pleased on the base, including of the exteriors of the vessels, but they were forbidden to take photos of the interiors, which constituted a stunning display of cutting-edge technology that will keep Greece at least a step ahead of potential opponents.

Hill expressed the thoughts and feelings of all present when he said “We were truly humbled by the display of these men who put their lives on the line daily to protect our families, friends & associates in Greece (Hellas), while also serving numerous humanitarian missions, both on Greece’s initiative and as members of NATO.”

This was truly symbolic as we approach the 2500-year anniversary of the “Battle of Salamis” where the invading Persian fleet was crushed by a vastly outnumbered yet united Hellenic Navy.

Thanking Vice Admiral Pavlopoulos, (Commander in Chief of the Hellenic Fleet), as well as the rest of the Hellenic Navy, for preserving the territorial integrity of Hellas, guarding the front door of Western Democracy, and protecting our families, friends and associates in the Patrida.

There were constant references to the fact that in 3 years the 2500 anniversary of the Battle of Salamis will be celebrated and it was noted that the heroism of the Hellenes on land and sea of that era defended not only Hellas but also saved Western Democracy from being extinguished by Persian tyranny, and that Greece, and especially the modern Greek Navy continue to “guard the gates of the West, the new Thermopylaes, and man the walls of new Constantinoples” In the words of Pavlopoulos.