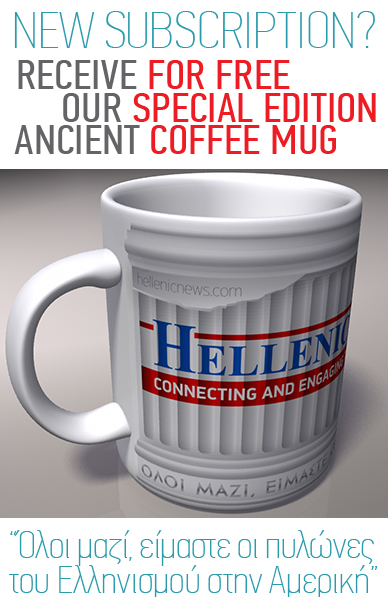 The prosperous and proud countries of Syria and Iraq have been fighting the ravages of war-madness for years. The Gulf War (1990-1) was the start and the ultimate demise of those nations. Fortified by a US-led coalition, foreign forces have in the end established a permanent footing in that region and things have never been the same ever since. The Bush Administration’s policy of “regime change” and “demonization” grabbed the opportunity to dominate and dictate policies in that region rich with oil reserves. By clandestine means and military might those two nations have been shattered and people’s lives ruined.

Control over the Middle East has always been for geopolitical control and exploitation of energy resources; it has nothing to do with “doing the right thing” for citizens or the country. That has always been a fallacy and myth!

Today, the new flavour of the moment is another political hot spot and that’s the small island of Cyprus found in the same region! It faces constant provocation by Turkey (already occupies 40%) but envisions controlling much more. The recent discovery of vast amounts of deep-sea deposits of gas has wet her appetite and caught the attention of IMF/EU but also corporate America now jockeying for position. Meanwhile, Turkey demands a share of what does not belong to her! The island’s fate remains to be seen; uncertainty for its future is open to interpretation.

However, countries like Syria, Libya and Iraq were always oil-rich and prosperous but also ruled by dictatorship. In hindsight, those dictators somewhat kept a sort of stability; be it under volatile conditions but under control nevertheless! The genie was never allowed out of the bottle by those dictators! One cannot claim the same today.

Hungry for energy and bank profits western nations reinforced those same dictators as long as they kept in line. If not, replacing one government with another had become a U.S. trademark that even a school child recognizes today. Are those countries and their citizens better off today than yesterday? That is the question and certainly debatable!

For thirteen years however, NATO allies have amalgamated their killing weaponry to cause suffering, chaos and political instability in the Middle East as well as refugee crises never experienced before. Innocent children and infants perish through starvation, while over one million men, women and children were slaughtered in Iraq and Syria under western “democratization”. Meanwhile over three million others subsist in deplorable refugee camp conditions and millions of other migrant-refugees are foot trekking through continents or boarding rickety boats to escape the massacre-frenzy of ISIS repressive Sharia theocracy and killing fields.

Yet, not long ago those same citizens lived in safety inside their own homes like the rest of the world does. Many ask who is responsible for this madness? Certainly not the masses of ordinary folk going about their daily lives!

Out of anarchy and pandemonium also arrived the degrading practice of human trafficking and slave labour, forced marriages of young girls to ISIS terrorists or the sale of shackled women as sex-slaves in open bazaars and market places to be put to work in brothels and other dehumanizing practices. For millions of citizens in western societies such atrocities simply reflect a passing historical cliché’: out of sight out of mind! Meanwhile, the mainstream media remain silent.

Yet, U.S-led coalition prides itself for the elimination of dictators but refuses to accept the consequences of its actions and invasion of foreign sovereign states, actions that finally shaped the current madness; a price worth paying most government’s do claim!

Retaliation was inevitable. Out of this poisoned brew of death, radical groups surfaced like woodworms to writhe and devour the soul of the innocent. They have managed to inflict anarchy in countries, which they once enjoyed stability and growth. The most notorious group of all has been the growth of the hate-driven Islamic State (ISIS) that declared Jihad against the rest of the world to either, “convert to Sunni Islam or die!”

Yet, some governments try to justify the current war-zone madness that affronts and insults common sense, reasoning and human compassion! In fact, those brutalities are condoned under the very eyes of one of the most important but also failed institutions in the world; the United Nations! Classifying some war-zone killings as “collateral damage” is not only unacceptable but also insane in a civilized society.

Historically, persecuted peoples have proven to be very resilient and always succeed in the end to overcome oppression. Nothing remains the same forever and out of the ashes of brutality arises retaliation. One of the most important ingredients aggressive nations seem to ignore is the principle that: one can kill millions but never kill an idea!

As a result to “democratize” others – a concept that cannot be imposed on people unless it’s nurtured to sprout and grow from within at its own pace – the growth of ISIS is one of those monsters that surfaced to cause a living hell for millions of people irrespective of nationality or religion.

Ironically, the vicious persecution of 1.5milion Christians from Iraq and Syria by ISIS does not seem to bother nations that have turned a blind to this detestable practice. In fact, liberal democracies refuse to recognize that spiritual values in society are important just as much as political and economic principles are. The current Christian genocide and systematic cultural destruction in the region appears to be less important than controlling oil-rich deposits. If this is not dealt with, in the next few years ISIS will see to it that no Christians are left in the Mesopotamia region; a region where Christianity was first born!

Recognizing that Russia’s own national interests were threatened, Moscow decided to get involved. On September 30, 2015 Russian jet fighters began air strikes against anti-government Syrian rebels (a product of NATO) and also against ISIS targets. Russian involvement has caught the West napping.

Caught by surprise, Russia’s bombing of ISIS-controlled areas outside the U.S.–led coalition, has horrified the Obama administration, the Pentagon and NATO. Putin’s decision to deal with ISIS has also exposed the coalition’s half-hearted charade and forced the hand of Washington and Western governments to put together a determined coalition air force to finally deal with ISIS effectively.

However, unless the money tap that feeds this evil is cut off and strong retaliation is taken against those nations that provide backing such as Saudi Arabia, Turkey and others, there will never be stability or peace in the region. In fact, powerful nations are aware how the money supply is transacted through the global banking system but choose to turn a blind eye. They seem to be more interested in making profits rather than worrying about the misery their inactiveness inflicts upon the innocent.

Determined, Russia’s resolve to join the frenzy went one step further to eradicate the ISIS menace. The Kremlin has announced that China is to send 5,000 of its most elite military forces into the Levant War Zone to help Russia in the fight against ISIS. The geopolitical map in the region has suddenly been transformed irrevocably with the US-led coalition now playing for position and influence to retain their dominance in global affairs.

If nations applied fair policies to help emerging nations improve living standards and boost up their economies, there would be far less conflict in the world. That philosophy however does not comply with the powerful plutocracy and a cleptocratic global banking cartel that thrives on loan dependency by financing conflicts in all shapes and forms. Wars are a means to churning the wheels of profits for institutional shareholders that in the end become the government behind the elected government; they decide and not the electorate!

Meanwhile, the scorched earth policy of war in the Middle East shows no sign of abating. Humans are turned to ashes by “surgical bombardment” on a daily basis and the insanity continues with players taking sides on this bloodied stage of lunacy: Syria; US; EU; NATO; UK, France, Germany, Shiites: Sunnis; Turkey; Kurds; Iraq; Russia; China; Saudis; Palestinians; Israel; Lebanon; Iran; Hezbollah and who knows how many other groups are killing one another in pursuit of dominance deep inside a War-Zone of absolute Madness!

Failed policies of the past in civilized democracies will continue to persist unless citizens on the street recognize they have a role to play. Simply casting a vote every five years it’s no longer good enough! Trusting the wisdom of temporary politicians without proper checks and balances in place has been one of those serious mistakes of the past. A new Revolution of the Mind is necessary to reach out and make changes by the people for the people, and not by the system for the system!