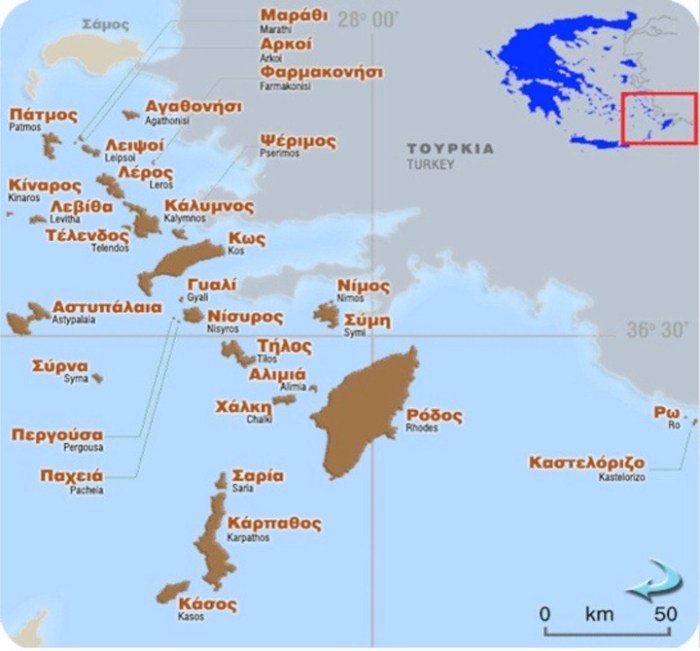 Article 12 of the Lausanne Peace Treaty with Turkey of 1923, ceded to Greece the sovereignty of Lemnos, Samothrace, Mytilene, Chios, Samos, and Ikaria.

As for the Dodecanese islands, they were ceded to Italy by virtue of article 15 of the same Treaty. Subsequently, the sea frontiers between the Turkish mainland and the Dodecanese Islands was established by the Agreement between Italy and Turkey signed in Ankara on January 4th 1932 by the Turkish Foreign Minister and the Italian Ambassador to Ankara. This Agreement was followed by a Protocol also signed in Ankara on December 28, 1932, by the Italian Naval Attache at the Italian Embassy and by a Turkish diplomat.  According to article 14 of the Paris Peace Treaty of 1947, the Dodecanese Islands and the adjacent islets were ceded to Greece. The 1932 Agreement and Protocol fixing the maritime frontiers between the Turkish mainland and the islands have since been applied by Turkey and Greece (successor State of Italy) without questions until the end of the 70’s when Ankara started raising claims.

Among some arguments used by Turkey is that the 1932 Agreement and Protocol were signed under pressure of the fascist regime in Rome. However, Turkey never denounced them during WWII nor after. Another argument is that the 1932 protocol is not valid since it was not registered with the League of Nations. The 1932 Protocol was a technical text implementing the 1932 basic Agreement which had been registered. The fact that the Protocol was not registered was not an oversight. It was then deemed and agreed upon as a supplement to the first agreement and as such did not need to be registered. As such it was mutually applied by both parties without any question.

Turkey has also been claiming that all islands, islets, and rocks not mentioned in international agreements off the coast of Asia minor, belong to Turkey. Article 12 of the Lausanne Peace Treaty states that all islands within three miles of the Asiatic coast remain under Turkish sovereignty. Consequently, all islands outside the three-mile of Turkish waters are ceded to Greece, whether mentioned or not in the Treaty.

With regard to the Dodecanese Islands, Article 15 of the Lausanne Peace Treaty specifically adds to the islands ceded to Italy also “the islets dependent from them” without naming them. Article 4 of the January 4th Agreement between Italy and Turkey  states: ”It is, of course, understood that all the islands, islets and rocks on either side of the line delimiting the waters established by the present convention, whether their names are mentioned or not, belong to the state, under the sovereignty of which lies the zone, in which the islands, islets or rocks are situated.”

Concerning the island of Imia, for which Greece and Turkey almost went to war in 1996, in paragraph 30 of the 28 December 1932 Protocol between Italy and Turkey it is mentioned as Kardak and explicitly mentions that the island is on the Italian side. Consequently today it lies on the Greek side.

The island of Pserimos is not mentioned by name in the December 1932 protocol but it lies Southeast of Kalymnos and North of Kos, well within Greek waters.

The island of Farmakonisi is mentioned in paragraphs 33 and 34 of the Protocol but not Agathonisi, which however is within Greek waters.

Fourni was ceded to Greece under the Lausanne Peace Treaty and while it is not mentioned by name in the Treaty lies to the west of the island of Samos and to the east of Ikaria, well within Greek waters.

It is exactly this lack of any legal basis on Turkey’s claims on some Greek islands that forces Ankara to threaten Athens and it also demonstrates that any bilateral discussions on these issues are useless and potentially dangerous.