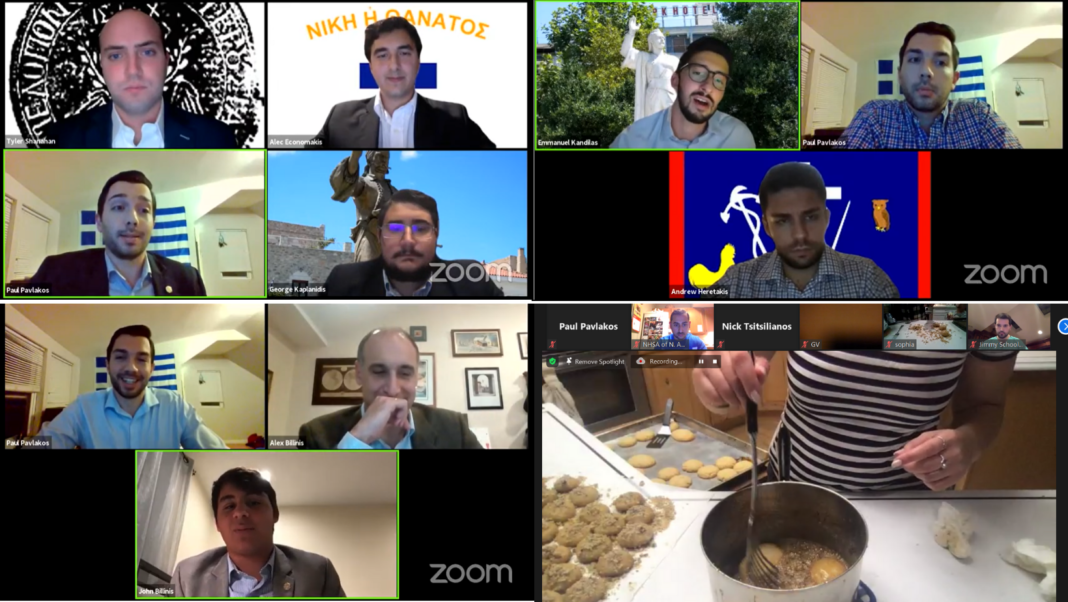 As 2021 dawns a new year, filled with hopes of a brighter, healthier, and more prosperous time ahead, we approach the 200th anniversary of the Greek Revolution and the birth of Modern Greece. Consistent with the theme of hope, we celebrate that, two centuries ago, Hellenes and Philhellenes sacrificed their lives and livelihoods with the hope of establishing freedom, securing independence, and restoring Hellenistic and Western values.

It is with this respect and remembrance in mind that the Greece 200 committee was formed during the summer of last year. Seeking to unite “the next generation” of the Hellenic Diaspora, Greece 200 is intended to “Honor Our Past by Building Our Future.” It does so through the empowerment of Hellenic youth and creation of programs that ensure the young Diaspora has a leading voice in the international celebrations of the Greek Bicentennial. With supporting organizations such as the Sons of Pericles and the National Hellenic Student Association (NHSA) of North America, Greece 200 has already established several initiatives designed to educate the youth of the Diaspora on Greece’s history, promote Hellenic culture, and create physical and digital commemorations of Greece and its culture and history.

Regarding historical education, the committee has planned a series of presentations and panels geared towards informing the community on various topics surrounding the Greek Revolution. The panels each provide a high-level overview meant to serve as an introduction to our common history. With each panel co-hosted by a local Sons of Pericles chapter, Greece 200’s historical education panel series has already allowed Hellenic youth across the Diaspora to learn more about their ancestry, having held seminars on the roles of Macedonia, Hydra, and Mani in the Revolution, co-hosted by Sons of Pericles members in Manhattan, NY, Greenville, SC, and Washington, D.C., respectively. The panel series continues this spring and summer, with topics such as the role of the Diaspora and Philhellenes in the Revolution and the Revolution’s reciprocal influence on the rest of Europe and the West.

“Additionally, Greece 200 has organized a series of cultural promotion events. Co-hosted by the NHSA, these events have already included Baking Melomakarona (with Eleni Saltas), Holistic Hellenic Wellness (with Kristina Hendricks from Yia Mas), and Mastiha Mixology (with Effie Panagopoulos from Kleos Mastiha). The committee is in the process of planning similar events meant to bring the community together in ways that allow us to unwind and share in our Hellenic culture.”

Aside from events, Greece 200 seeks to strengthen the ethnic bond between our communities by creating digital and physical commemorations of the history of Modern Greece. As a part of its “Your Story” initiative, the committee is seeking submissions from the Diaspora, sharing their family’s history and ancestry. Emphasizing the philosophy that each of us is part of the “interwoven history that makes up the mural of Greece,” the Your Story initiative will collect these submissions and promote excerpts to showcase the many family stories that make up our community. The initiative will culminate with the creation of a digital and interactive map, showing the migration patterns of the Diaspora and our immediate ancestors. This initiative will be presented at the International Greek Ancestry Conference at the end of January.

Finally, in its most ambitious goal, Greece 200 is announcing its commitment to the construction of a monument in remembrance and recognition of the Greek Genocide of 1914-1923. The monument will be a testimony of our community’s shared history, and an acknowledgment that oppression by Ottoman rule and ideas did not end with the independence of Greece, but rather continues, though in different forms, throughout the last two centuries. This project is in co-operation with the Sons of Pericles, who have advocated for formal recognition and education frequently and, while a location is yet to be determined, Greece 200 plans to unveil the initial design of the monument on March 25th, 2021.