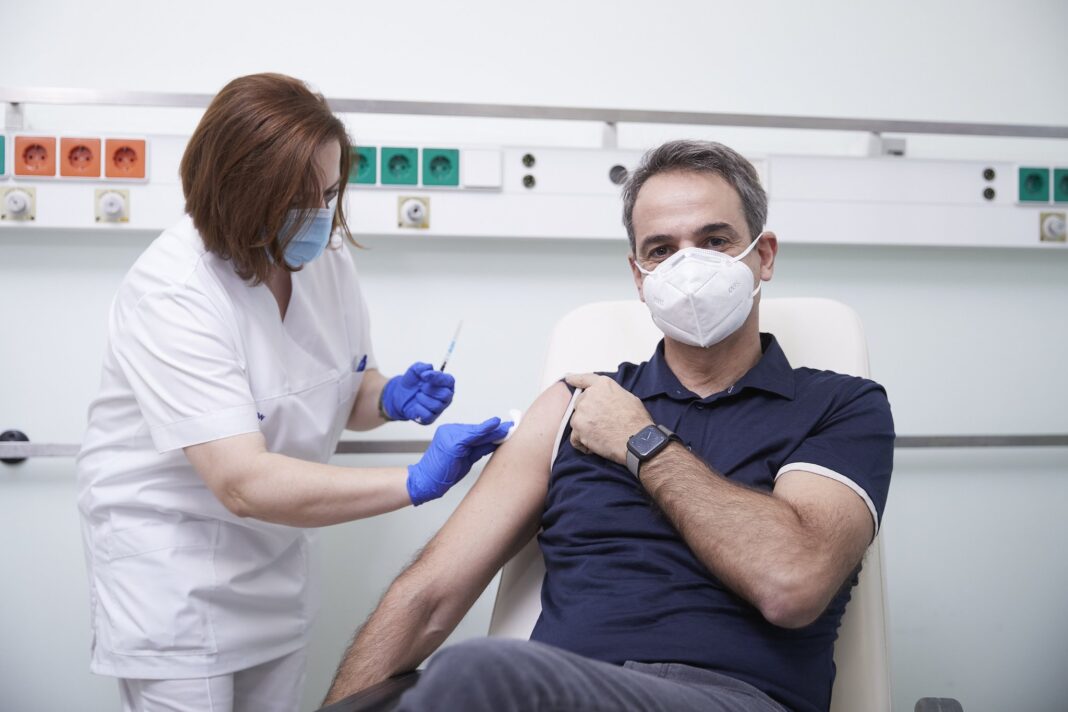 The first of the 1.2 million doses of the Pfizer/BioNTech vaccines estimated to be received by end of March, arrived in Greece after Christmas and the first vaccines were administered to heads of state, government officials in critical positions, heads of the health departments and heads of law and order as well as leaders of the Greek Orthodox Church on December 27th. Approximately 5,000 citizens, in particular those front liners in the medical field, are being vaccinated a day said Prime Minister Kyriakos Mitsotakis. This fast pace leads to hope that the initial goal announced of 220,000 vaccinations administered by the end of January will be met.  Front liners in government and law and order are next in queue as well as the elderly and sick living in nursing homes and other long-term care centers. From January 20, 2021, citizens over 85 will be next in line to be vaccinated. It is mandatory for everyone over the age of 18 to be vaccinated on a descending age and on the basis of priority for anyone with a medical history of underlying diseases.

A vaccine headquarters has been set up in Athens, known as the “War Room” which coordinates the vaccination operation dubbed “Eleftheria” meaning freedom in the first 42 of the estimated 1000 vaccine centers that will be set up in the mainland and all over Greece.  Because of the intricate logistics of transportation and distribution of the vaccine, the military and mobile units of the Hellenic National Organization of Public Health (EODY) are being enlisted in the vaccination process for the rest of the population on the Greek islands and other remote areas.  The timeline goals of vaccination are for 50% of the population to be vaccinated by Easter and 70% by the summer. When more trial data is collected from this and the other manufacturer’s vaccines, which are due for roll out in the Spring, then a definite determination will be made if the vaccine is safe to be administered to pregnant women and children.

On January 11, 2021, the online platform at emvolio.gov.gr will be open for the rest of the population to register to receive a scheduled appointment to report to one of the assigned vaccination centers. At that time people will be screened for fever, allergies, and have a brief medical history taken in order to decide if it is safe for them to take the vaccine.  The registration process will include logging in with Taxisnet codes and providing an AMKA social security number along with their personal information, name, address, telephone, email.  The vaccine will be administered free of charge and thus an AMKA number is a mandatory prerequisite.  Any citizen that does not have one is encouraged to visit their local vital records offices known as KEP and apply for one.  Furthermore, if any citizen does not have access to the Taxisnet platform and does not have codes that will verify the authenticity of their application on the vaccine online platform, then those citizens will be able to visit certain local pharmacies and present all the other information, including their AMKA number to request a scheduled date for their vaccination.

Those who have been vaccinated will receive a digital card that includes information on vaccination date and any follow-up doctor visits after the vaccine.  Of course, there is also a lot of speculation and discussion on the “vaccination passports”.  These are said to be in the form of some type of digital application such as the “CommonPass” developed by the non-profit organization The Commons Project Foundation, backed by the Rockefeller Foundation and The World Economic Forum amongst others.  The application will be scannable and provide information on the users Covid-19 tests and vaccinations and used as proof for travel allowance. They may also eventually be required for entry to theatres, cinemas, restaurants, concerts, etc.  This is a scenario that requires governments worldwide to work together to standardize testing and vaccination requirements.

The Pfizer vaccine with 95% effectiveness will be administered in two doses, 21 days apart and then should be completely effective a week later, in other words a month after initial vaccination.  According to the vaccination plan presented by the Ministry of Health, Greece will receive 4.7 million vaccines of the Pfizer/BioNTech vaccine and 1.8 million vaccines from Moderna, which are expected to arrive next.  The AstraZeneca/Oxford vaccine is also said to be arriving to Greece within the next few weeks. Of which 7.1 million vaccines in total are expected to be delivered. While the much anticipated, one dose vaccine by Johnson & Johnson may arrive as early as February. Greece is expected to receive 4.7 million of the Johnson & Johnson vaccine.  While 4.7 million of the Sanofi/GSK vaccine has been allotted for Greece, as well as 5.3 of the Curevac vaccine. Thus, a total of 28.3 million vaccines should be received to cover the vaccination of the entire population of Greece.

The vaccination process is said to be just the beginning of the end to Covid-19. As Greece’s “Elefteria” vaccination process continues with the hope of the population completely vaccinated within the year, then ’21, the year of freedom in the history of Greece will be doubly celebrated, first in commemoration of the 1821 independence of the nation, and second for freedom from the global pandemic that raged upon us 200 years later.

Previous articleYouth of Hellenic Diaspora Unite Through “Greece 200” to Celebrate the Greek Bicentennial
Next articleAmb. Pyatt: AHEPA “Puts Our Shared Values into Practice”