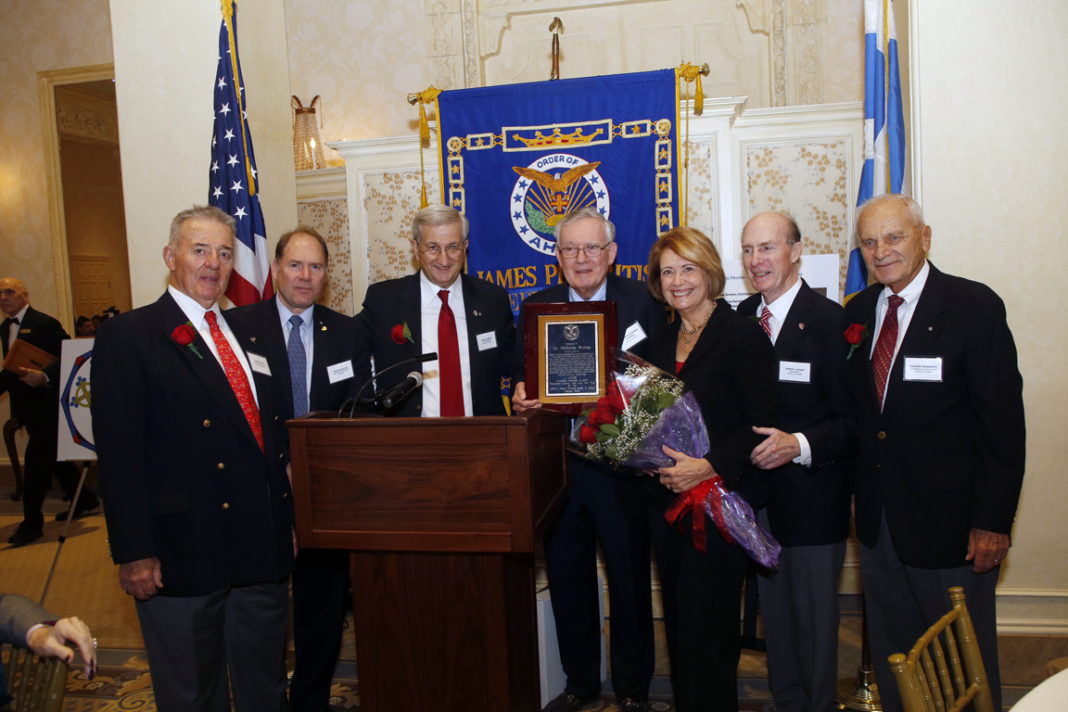 left to right, Supreme Governor, Tom Dushas, Supreme President, Carl Hollister, Event Chairman, James Zafiros, Honoree, Dr. Nicholas Romas, his wife Serene, Chapter Executive Officers, President, Joe Keane and Chairman of the Board of Trustees, Zachary Marantis.
——————————————————————————————————
On Saturday, December 2, 2017, the James Plevritis-Joseph C. Keane Evzone Chapter of New Rochelle, New York held its 15th Annual Initiation and Luncheon at the Westchester Country Club in Rye, New York honoring the chapters Man of the Year, Dr. Nicholas Romas, with their Life time Achievement Award.  The award highlighted his dedication to his profession, service to humanity and guidance and care for his fellow AHEPANS.
The program began with a formal, a colorful rendition of the national anthems of the United States and Greece and the introduction of the chapters degree team, led by Captain of the Guard, Brother Costa Papademetriou and the introduction of the 2017 inductees. Supreme Secretary, Jimmy Kokotas addressed the new members and the District Lodge, Led by Governor Ted Stamas pined the new members with the AHEPA Insignia.
The initiation was followed by the luncheon and award presentation. More than 200 AHEPANS, family members, guests,  including eight chapter presidents, the entire Empire State District Lodge, Supreme Governor, Tom Dushas, Supreme Secretary Jimmy Kokotas, Supreme Trustee Elias Tsekerides and Key Note Speaker, Supreme President, Carl Hollister participated in the festivities. The Supreme President noted how AHEPA affects the daily  lives of thousands of Greek-Americans and Phil-Hellenes through its many programs and scholarships in the United States and abroad and noted in 2022 AHEPA will be celebrating its remarkable 100th Anniversary. He congratulated the chapter for its visionary selection of Honoree, Dr. Nicholas Romas as their Man of the Year.
The Supreme President was followed by the extraordinary introduction of Dr. Nicholas Romas, by family member, Harry Wilson who detailed the honorees background. Dr. Romas is currently Professor of Urology at Columbia University Medical Center and was recognized by US News and World Reports as one of Americas top Urological Physicians.   He served as a Major in the United Sates Air Force. His family includes his wife Serene , three daughters, Stavra, Eva and Pamela and ten grandchildren. Dr.Romas, received a standing ovation from the exceptionally large crowd attending.
Share
Facebook
Twitter
Pinterest
WhatsApp
Linkedin
Email
Viber