33 Reasons Why Athens Is The Next Big Thing 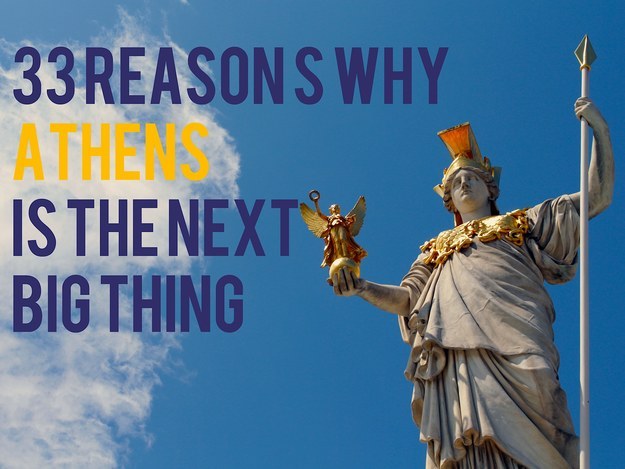 1. Athenians emerged from the financial crisis stronger and wiser.

3. There has been a logic-defying explosion of awesome bars, restaurants, and cafes since the crisis.

Drinks in the Gazi – a former gas plant turned artsy ‘hood in the center of the city.

4. Forget Paris or Rome, Athens has the largest cafe culture in the world.

In Athens it is possible that there is more cafes than inhabitants.

While Londoners, Parisians and even some Romans eat at their desk, long lunches are still normal in Athens.

6. “Social” is not a strong enough word to describe most Athenians.

Athenians love to talk – a lot.

7. The city isn’t plagued by rules.

It’s not like Athens doesn’t have rules – it does. It’s just that those that are seen as an impediment to living well aren’t really followed.

Athens and the region of Attica.

…a seaside Mediterranean one…

View of Faliro from the Poseidon Hotel.

… and an inland historical center surrounded by mountains.

Sunset view from the Lycabettus hill over Athens.

9. There are dozens of great beaches nearby.

The patio at A for Athens hotel and bar overlooking the city.

The view of Lycabettus Hill from the Acropolis.

12. The city’s visitors, former residents and occupiers have left amazing things behind (though who knows what they took away):

The Parthenon in all its glory.

Athens’ Parliament and former palace of the Bavarian King Otto.

13. The city’s museums are world-class but underappreciated.

15. The street art is world class (though the tagging remains awful)

Most European capitals are jaw-droppingly expensive, while Athens continues to be a bargain for any traveler. European brands at discount prices and, er, free hugs for all.

17. Out of the crisis came a booming tech start-up culture.

Nikos Drandakis of the fantastic start-up TaxiBeat that helps Athenians find reliable and friendly cabs in the city.

18. They’re really good at combining bars, cafes, concert halls, art spaces and sometimes even a pool into one venue.

The idea is a reserve a table with friends, buy a few bottles and baskets of rose petals to throw at the feet of performers and watch your money disappear quickly to the soundtrack of Greek pop. Dancing onstage is encouraged.

21. There’s something wonderful about street kiosks where you can buy a beer, a box of tylenol or a Byzantine flag at any hour.

Kiosks can be found on nearly every corner of the city.

22. You wouldn’t tell by looking at it but Athens is safer than most cities its size.

23. The city’s central market is the real deal.

Far from a tourist trap, Athens’ central market might just be the most authentic Mediterranean experience there is.

24. And every neighborhood in the city has a lively farmer’s market once per week.

A farmer selling potatoes in the Kolonaki neighborhood.

A typical mezes complete with tzatziki, octopus, boiled greens and a village salad.

26. The seafood is heavenly.

A piece of grilled octopus from the restaurant Varoulko Seaside near Piraeus.

Though this might not seem like a reason to visit a city, you’ll think differently when a bowl of olives, pistachios, cheese, salty carrots or some grilled veggies arrive with your beer.

A dish from the Museum of Greek Gastronomy Museum in central Athens.

The view from Mount Hymettos, which looms over the city.

30. Athens has mild weather all year round.

It’s rare to find a cloud in summer.

31. You’re a few hours by boat from over one thousand stunning islands.

Firopotmas bay on the island of Milos.

32. Decent skiing isn’t far away either.

Hitting the slopes on Mount Parnassus next to Delphi.

33. Oh yeah and it was also the birthplace of democracy and, arguably, of Western Civilization.

The entrance to the Acropolis.

But what do real Athenians think of their city?

Here is Athens in their words:

“Athens has great mix of eastern and western daily life, modern and ancient culture. You can face the Parthenon at the same time you’re having a meeting in a modern loft.”

“Apart from the fact that Athens is an ancient, historic city (we all know that), full of energy that you can actually feel by just by taking a walk, it is also never static, and always controversial – always transforming. It’s a place full of life, bursting with fun- filled adventures. This is every day Athens to me.”

“Athens is the most underrated city in Europe. Sure it’s the birthplace of Western Civilization but it’s also a funky, buzzing modern city that has enough cultural events to keep me busy most nights a week. The bars are some of the best in the world – and trust me I’d know.”

“There is no better feeling than discovering a hidden paralia (beach), close to Athens yet invisible – there are lots. It almost feels like you are part of some big secret that you only share with your favorite people. And as long as its a secret, there will always be enough space to lay down your towel.”

“I love Megaro Mousikis (Athens’ largest concert hall). They host classical music events there, but every summer they have a festival on the grass in the garden next to it. It is mostly Greek bands – rock, indie, folk – it’s actually quite nice. People chill on the grass, and bring food and drinks.”

“Kifisia is a northern suburb of Athens with its own vibe and life, close enough to the center of Athens so its residents are not far away from the colourful capital. I live abroad permanently, so every time I visit home I enjoy every day spent there, discovering more beauties and places in the area, or just visiting the familiar ones that I have missed.”