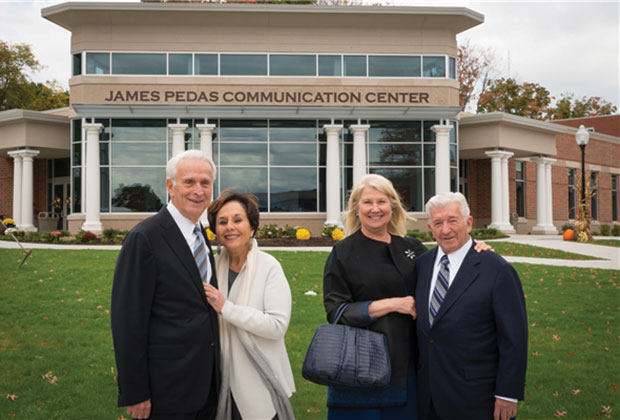 Pedas, who graduated from Theil in 1950 with a B.S. in Economics and who was awarded an honorary doctorate by the college in 1989, provided the initial gift for the $6.5-million facility in 2006, the first new academic building in 40 years. He had also been named Trustee Emeritus to the Board of Trustees and received the Distinguished Alumnus Award for Professional Accomplishment.

Pedas and his brother Ted are long-time members of Leadership 100, along with their wives, Wanda and Evangeline, respectively. The sons of Greek immigrants, they are natives of Farrell, Pennsylvania, but are best known for their legendary history in the entertainment industry. The brothers, both trained in law at George Washington University, established Colt 45 Records, a recording company that launched the career of Don Covay, who wrote “Chain of Fools” and “Mercy, Mercy”, among others, and later began small drive-in movie theatres that grew into their owning a majority of all the theater screens in the nation’s capital. They started the expansion with a lease of the Circle Theatre, developing it into a circuit of theatres and adding Showcase Theatres. The business continued to grow into a significant interest in Circuit/Showcase theatre, part of Cinema 5 Ltd., in Philadelphia and New York.

The Pedas brothers also owned successful film distribution and film production companies, Circle Releasing Corp. and Circle Films, foremost backers of independent cinema in the 1980s and 1990s. They gave the now famous Coen brothers their start with their early films Blood Simple, cult classic Raising Arizona, Miller’s Crossing and Barton Fink, the winner of the Cannes Festival Golden Palm Award.  The Coen brothers are well known for their films True Grit, No Country for Old Men, The Big Lebowski and O Brother, Where Art Thou?

With ownership of so many properties, the brothers eventually formed the Circle Management Company to develop real estate, but the entertainment business remains their pride and joy.

Pedas was named Washingtonian of the Year in 1973 and received the American University’s Award for Contribution to Film Culture in 1985. He established a Chair in Intellectual Property and Technology Law at George Washington University.

Dr. Troy D. VanAken, Thiel College President, said he has been working with Pedas on the facility “to see his dream come to fruition in a way that is going to have a high impact on students.” The Pedas Center, which will enable students across majors and disciplines to engage in diverse media activities, will also serve as an intellectual hub at the college, providing a technologically advance area for creating, producing, practicing and performing in an interactive creative space. In addition, Pedas Center fellows will be comprised of top students interested in communications and mass media.