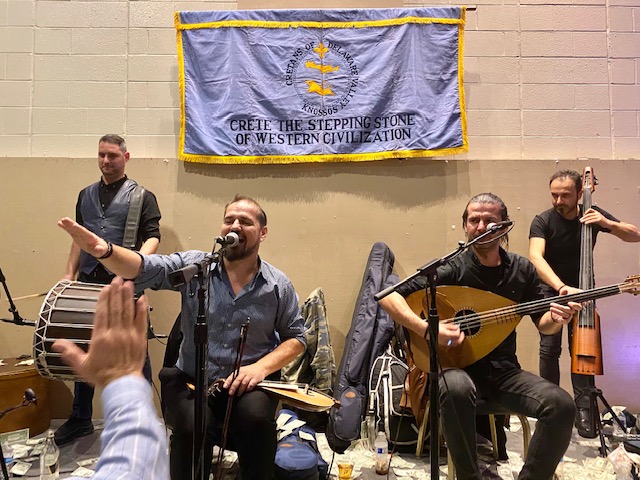 The greatest advantage of sharing my time equally in recent years between Greece and the US  is discovering music scenes and musicians that otherwise I may have never seen. I was lucky enough to experience this with the Strataki brothers.  I had listened to some of Giorgos and Nikos Stratakis’ songs but I didn’t expect what happened to me when I saw them live at Omalos Kentro in Athens.  From the first “note” they had me mesmerized. A few months later, again I was in awe of them, after they accepted an invitation by Dionysis Savvopoulos’s to partake in the first concert at the Olympic Stadium “Kallimarmaro” for the philanthropic organization “Oloi Mazi Mporoume” next to notable artists such as Eleftheria Arvanitaki, Dimitra Galaniou, Fiorola Zeliou, Fiorola DeLio, Giannis Zouganeli, Violeta Ikari, Vassiliki Karakosta, Kostis Maraveja, the late Lavrentis Mahairitsa, Panos Mouzourakis, Katerina Polemi, Melina Tanagri, Maria Farantouri and Yiannis Xaroulis. That is when I realized the sincere depth and kindness of their souls and found out how often they perform for such charities and other causes that sometimes reach the spotlight. It’s rare today to find artists who are so authentic and at the same time so humble.  With their appearances in television events such as Spyros Papadopoulos’s “Stin Ygeia Mas” where they joined their musical powers with the Tsakhtouridis brothers, and a stunning two-part broadcast on ET3 about contemporary folk and emerging contemporary artists, as well as their cameo appearance for last year’s New Year’s Eve episode on Alpha’s “Min Arxizeis tin Mourmoura” series, the Stratakis brothers have enchanted a vast musical audience of the Greek pentagram.

They have created their own identity within the Greek music realm and take us with them on a magical journey of emotions that is touched by every chord they play but also by Giorgos’ exuberant extemporaneity which blends harmoniously with Nikos’ excellent musical dexterity.  Their journey began in Rhodia, a semi-mountainous village in Heraklion, Crete, where as young children they began to play music upon their father’s encouragement. Giorgos Stratakis started playing Lyra at age 9, and his brother Nikos Stratakis started at a later age at 11 being mentored by Psaragiannis, Psarantonis, Psarogiorgis and Psaralambis of the Xylouris family.  After their many years of traveling and entertaining audiences separately, both at festivals and at various music venues in and outside Greece, the passing of time brought the two brothers together and they created what is now known as the Giorgos and Nikos Stratakis music band along with their younger brother Manos Stratakis on the drum, and their worthy collaborators, Dimitris Matzarakis on guitar and Alekos Chatzakis on contrabass, and Giorgos Makris and Giorgos Salustros on woodwind instruments.  As they themselves say, “We created a musical group with remarkable friends and skilled musicians, with the same “musical madness” as ours and we just started without a plan and without a compass to do what best expresses us as it all comes from within. We insist on seeing Cretan music and music in general, in terms of creativity and not in terms of competitiveness.” Because their vision, as they have said, is “for the music of Crete to reach the far corners of the world in any fruitful successful way, regardless of which artist does this.” That is also why they too have traveled across the globe from Australia to Canada to revive and convey the traditional sounds of their home country.

When asked recently in an interview in the advent of their appearances at the “Stavros tou Notou” music venue in Athens, about their music they said, “We believe that Cretan music is a very intelligent ‘living organism’, keeping everything that suits it today and moving on, and just like every ‘living organism’ that grows and transforms, so does Cretan music… it doesn’t stop living and breathing … and is constantly evolving.  Of course, the Cretan verse (mantinades in songs) has also played an important and catalytic role in this particular music. Usually, in our songs we choose heavy lyrics about locals talking about all human emotions. Mostly they talk about love, joy, pain and death.”

The two brothers from Crete, having been together for 10 years now have recorded 6 records.  In December 2012, their first record, “7 of March”, was released. In March 2014, Nikos Stratakis’s first solo work titled “Anasa” (Breath) was released, with special collaborations such as those of Socrates Malamas and Vasilis Skoulas. In August 2014 their second work titled “To Kopeli and the Dragon” was released and the same year so was the personal work of Nikos Stratakis, entitled “Nero kai Alati” (Water and Salt).  In 2016, they released their third collaboration titled “Dictamo and Neranzi”. And this year they released their latest work with featured vocals by the other brother Manos and their sister Voula Stratakis, entitled “Epelasi”. And they continue to give us both captivating personal and collaborative music creations.

They have been described by Greece’s music audience as “ambassadors of Cretan music” amongst today’s youth.  And that must have certainly played a vital part in the decision of the Cretans of Delaware Society of Knossos to invite them for their annual dance at St. Thomas of Cherry Hill, New Jersey.  As President Michalis Venianakis told me, “In the constant effort to bring the Cretan youth closer together, we decided to invite Giorgos and Nikos Stratakis from the island to entertain us with their talent that speaks “to the soul of every enthusiast of our traditional music.”  On that evening I met Greeks of the Omogenia who traveled from all over, Boston, New York, New Jersey, Ohio, Pennsylvania, Delaware, Maryland, Washington, and Virginia, and they all told me that not only did they speak to their souls but their souls felt every feeling of joy, sadness and nostalgia for Greece, for Crete, for family moments whenever they visit them back home on the island.  Everyone expressed how they look forward to seeing Giorgos and Nikos Stratakis and other Cretan artists, coming and bringing a little bit of Crete as they entertain us with their music more often on this side of the Atlantic Ocean.