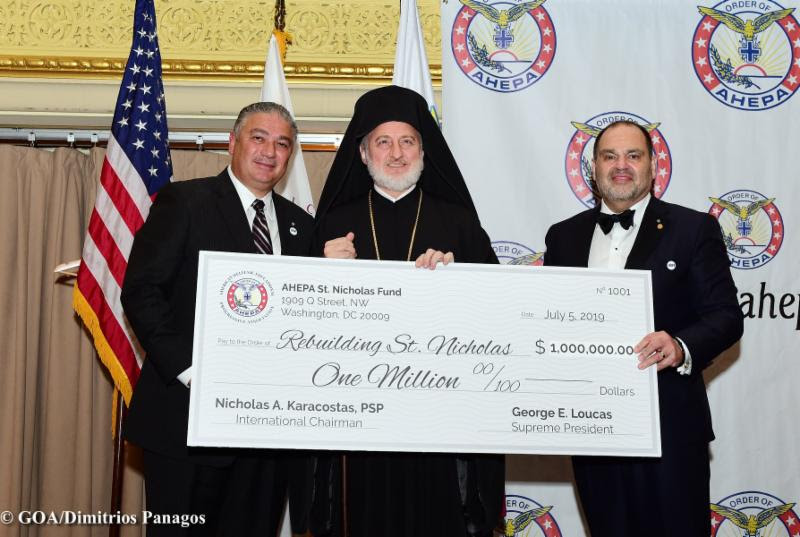 Share
Facebook
Twitter
Pinterest
WhatsApp
Linkedin
Email
Viber
CHICAGO–AHEPA fulfilled its $1 million donation to rebuild Saint Nicholas Greek Orthodox Church and National Shrine at World Trade Center with a presentation of the remaining pledge balance to His Eminence Archbishop Elpidophoros of America at the 97th Grand Banquet, July 5, 2019, announced Supreme President George E. Loucas and Chairman of the Board Nicholas A. Karacostas.
Supreme President Loucas, and Chairman of the Board Karacostas, who also served as the chairman of AHEPA’s Capital Campaign to rebuild Saint Nicholas, presented the donation to Archbishop Elpidophoros.
“Since 1922, AHEPA has stood by the Greek Orthodox Archdiocese of America thus creating the ‘Twin Pillars of Hellenism’ in America that we see today,” Loucas said. “We are deeply grateful to the AHEPA family; to our amazing grassroots network of districts, chapters, and dedicated members, all of who made this landmark donation a reality.”
Karacostas added, “We are proud to be the only secular organization to make and fulfill a one-million-dollar donation to this campaign.  I echo the sentiments of Supreme President Loucas in convey our sincere appreciation to all our donors.”
Additionally, Loucas and Karacostas expressed confidence Saint Nicholas Greek Orthodox Church and National Shrine will be rebuilt and both hope AHEPA’s fulfillment of its pledge will provide the springboard for the additional support the project needs.
The 97th Grand Banquet is the pinnacle event of the 97th Annual Supreme Convention, which took place this week in Chicago, Ill.
Photo: Supreme President Loucas (right) and Chairman of the Board Karacostas, PSP (left), present Archbishop Elpidophoros with the fulfillment of AHEPA‘s $1 million donation to help rebuild St. Nicholas. Photo credit: GOA/Dimitrios S Panagos