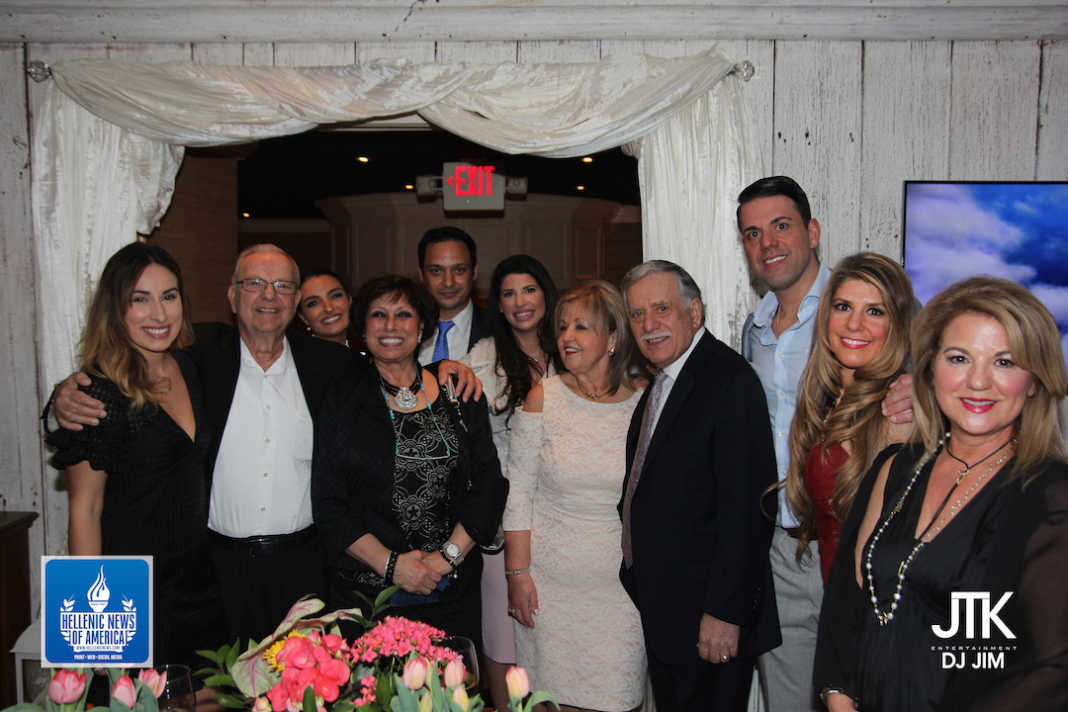 It read like a Who’s Who list of Greek and Greek American dignitaries as Hermes Expo International founder Paul Kotrotsios extended his welcome to the guests of this year’s week-long Expo.

Kotrotsios offered his warm welcome during opening remarks at the annual Hermes Award dinner April 10, 2019 at the Estia Restaurant Ballroom in Philadelphia.

“We have among us the deputy governor of Thessaly, Nikolas Lioupas,” he said.

Also acknowledged Phil Kafarakis, president of the Specialty Food Association, who addressed the audience at the Luncheon, Philadelphia Court of Common Pleas Judge, the Honorable Ourania Papademetriou, Georgia Halakos, President of the Federation of the Hellenic American Societies of Philadelphia, Anastasi Stampolis, Civic responsibility Director of AHEPA District 6 in New York, and finally, Dr. Roxane Hionis of the Hellenic Medical Society of Philadelphia.

The guest list at this year’s Hermes Expo should come as no surprise for those who have worked with Kotrotsios or participated in this annual event.  It is, of course, all about networking.

More importantly, it’s about keeping everyone in the Hellenic community—business, culture, church, charity, family—connected and talking with each other.  This year, that connectivity extended all the way to the communities and businesses of Greece who were invited to tap into the American marketplace through the Expo.

“We need to assist them and cooperate with them to give them the opportunity to bring to the United States of America the best of the best that Greece has to offer today. That’s what we do,” Kotrotsios told the crowd gathered at the dinner.

That thread was later picked up by Kotrotsios’ daughter, Aphrodite. “The Greek, Greek American and American business and professional community converge here at the Hermes Expo, the only live business forum of its kind, which brings together people of various professional backgrounds to meet, connect, explore, cultivate and innovate, all in one room since 1992,” she said.

The Expo is about business opportunities and choices and about what’s possible. “Your presence and active participation today show your willingness to be part of this movement and expand your horizon. We must continue moving forward united and strong in support of one another in order to achieve what is often seen as unachievable,” Aphrodite told the dinner guests.

With those stirring words, she next moved on to the awards presentation, honoring those Greek Americans who have excelled in their field or supported and expanded the cause of Hellenism.

Topping the list this year was the Very Rev. Archimandrite Ambrose Bitziadis Bowers, the presiding priest at St. George Cathedral in Philadelphia. Father Ambrose has been leading efforts to renovate the cathedral “that will elevate it to an entirely new level.” The cathedral is the mother church of the seven surrounding Greek Orthodox communities in the Greater Philadelphia Area.

“When Paul approached me and offered me the honor of being the recipient of this award, I said to him, ‘I don’t have a restaurant. I’m not in the food industry or business so why am I receiving this award?’” Father Ambrose recalled.  But the church offers spiritual food for the people, he said, “and we liberate and inspire the people in Philadelphia, the orthodox and the Christians, but especially the Hellenes.”

The cathedral was erected in 1821 during the time of the great liberation from the Ottomans, a legendary building that was acquired by the Greek American community in 1911 and a legacy to be out front of Orthodoxy in Philadelphia and the Delaware Valley. “It is wonderful to continue that legacy,” Father Ambrose said. “What we are doing here today is not for today or the next 10 years. It is for the second, the third and more generations of Hellenes and Greek Americans to stay and understand our faith, our tradition and our Hellenism.” 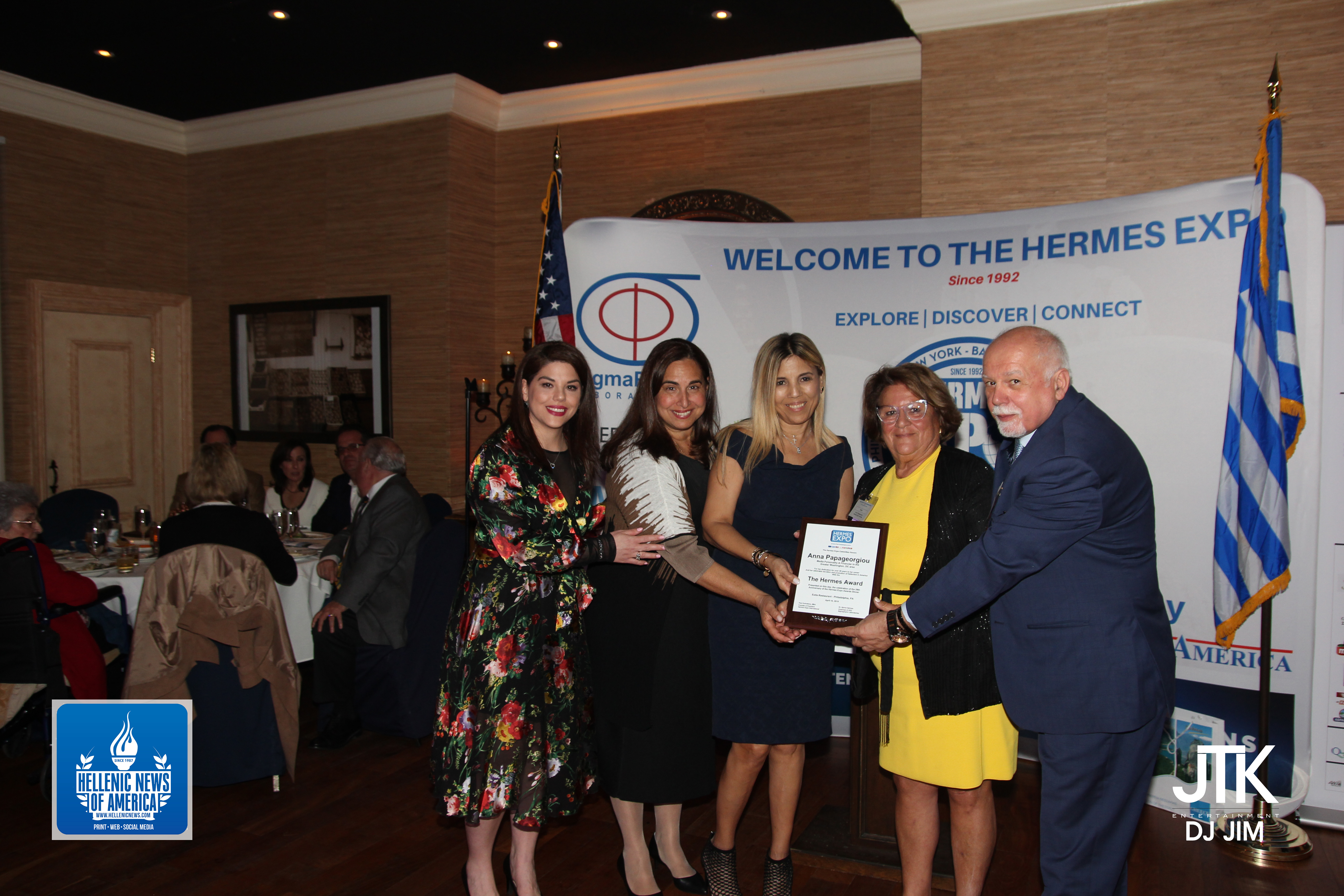 The second honoree of the night was Anna Papageorgiou, a media personality out of Washington, D.C. known for her 30 years of radio work promoting the history of Macedonia. “It will always be in my blood to promote our beautiful heritage in the exceptional country that we live in.  Thank you, my dear brother, Paul, I will always be by your side. And congratulations to Aphrodite, although with a great career, you decided to take over and continue your father’s legacy. It was so great meeting all the amazing exhibitors.  My heart has been filled with love and friendship from the new friends I have made here at the Hermes Expo,” shared Mrs. Papageorgiou.

The third honoree, Dr. Aristotle Michopoulos, was also the dinner’s keynote speaker. As Dean for six years at the Hellenic College of Holy Cross in Massachusetts, he has fought for the preservation of the Greek language in America and the perpetuation of Greek heritage.  “I am beyond pleased with you Paul and your family for all that you have done for Hellenism in America. I would like to say a few words about Paul that you may not know.  We know each other for more than 30-years and he holds his roots from Epirus, Greece.  Epirus for Greece is well known for its great benefactors. And this is what Paul is for Hellenism in America.  He is not a millionaire but he has the largest heart and with this heart, he has united all of the Omogeneia.  Hellenic News of America is the only newspaper that actually unites the Omogeneia. And he makes us proud and it is an honor to have him a great friend,” expressed Dr. Michopoulos.

The fourth honoree was Dr. Sotirios N. Prapas, director of the Cardiac Surgery Department of the Henry Dunant Hospital Center. He is currently director of the Hellenic Cardiovascular Society of Surgeons in Greece. “I would like to thank Mr. Kotrotsios for his kind gesture to honor the work of a Greek, whereas here in America, he feels more like a Hellene than in his own country.  You have all come here as first, second, third generation Greeks, and over the years, you were able to bridge the gap between you and the people who were already established here in America. I am a third generation Greek from Thessaly. Thessaly was freed in 1881 and my grandfather, Vasilis, first generation, was a shepherd.  My father (second generation), lost his hand in World War II and despite the loss of his hand, he went on to work as a builder.   As for myself, as a third generation, with great passion and strength from the hardships my family and our country had endured, I was able to achieve, with God’s blessings, to develop a prototype cardiac bypass procedure.  I have traveled the world in promotion of our country and our strength as people because, despite all the hardships our country had faced, we were able to overcome them and achieve the unachievable,” said Dr. Prapas.

The fifth honoree was Danny Vogia, founder of Stone Tech Fabrication in Trenton, New Jersey 30 years ago.  He was recognized for his efforts to promote products from Greece and for his contributions to Hellenism and philanthropy. “Mr. Danny Vogia is not only a state of the art businessman but a philanthropist at heart. Mr. Vogia contributes back to his faith and heritage in any way that he can,” shared Aphrodite.

The sixth and last honoree was Cornelius Anastasiadis, president of AHEPA Chapter No. 26 Hercules. He was recognized for his efforts to help sick children coming from Greece and Cyprus for medical treatment in America. “He always finds a way to accommodate their stay and make them feel more at home,” Aphrodite said. “He works closely with his friends to provide home-cooked meals, transportation, hotel accommodations and anything that helps make these children and their families feel a bit more comfortable in these difficult times.” Our families came in the 1915s and during that time my grandmother would sit me on the porch in West Philadelphia and we would watch tv and would point out anybody with an “S” at the end of their name and say they were Greek!   This is how we grew up; we had an extreme love for Greece. We always went to Greek stores to buy things and we supported Greeks all the time.  This kind of stopped in the 70s when the immense wave of Greeks that came over and then everything kind of spread out and we lost ourselves.  We didn’t support each other anymore and we don’t support each other as much as we should right now.  Pavlo and his family have been trying to network us and connect us with Greeks all over the place and I believe that we should go back to supporting each other.  We have been around for 50 centuries.  That is 5000-years of recorded history. I have a bible from my grandmother that is from 1821 and is in Greek but has Turkish writing in it because my family is from Asia Minor.  Looking at this and seeing how we remained Greek even though we were out of Greece for a long time is truly amazing,” shared Mr. Anastasiadis.

As dessert was served and the awards ceremonies wound to a close, another Hermes Expo tradition began.  Speeches were replaced by music, this time provided by JTK Entertainment and DJ Jim. Moments later, the Greek dancing began. Another Hermes Expo Awards dinner had come to a close.